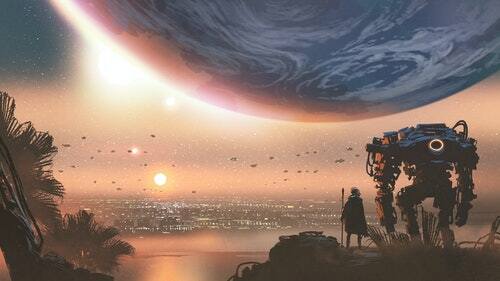 The label of a “bad movie” is a blessing and a curse.

Yes, any dreams of a Criterion release and cinematic triumph are dashed, but fame and fortune are still feasible. Just look at Tommy Wiseau’s curious rise to fame with The Room. A “bad movie” could make a more significant impact than just a perfectly decent one in many ways. The label isn’t a death sentence.

Unless, of course, the movie doesn’t deserve it at all, like this 2015 film now streaming on Netflix.

Chappie is a 2015 film written and directed by South African filmmaker Neill Blomkamp. When you google “Chappie,” the first frequently asked question suggested by the search engine is “Why is Chappie bad?”

That’s the question I had when I watched Chappie after only knowing of the film from a viral tweet. I loved every second of the movie.

Chappie combines E.T. and Robocop, showing a near-future South Africa where robotic police squads keep crime at bay. One inventor attempts to create a fully sentient robot that can make decisions and keep to his own morality.

There’s only one problem. This robot, affectionately named Chappie, is raised by criminals. Not just any criminals, but criminals played by hit rave artists Die Antwoord. Throughout the film, Chappie acts like a young child who develops his newfound independent brain but is forced into an incredibly adult world.

The heart of the film may be Chappie himself, but the brain behind the operation is Deon, the creator and surrogate moral voice for Chappie. Played with all the heart and promise by a post-Slumdog Millionaire but pre-Green Knight Dev Patel, Deon is the overlooked strength of this film.

Chappie combines questions surrounding militant policing, nature vs. nurture, and even the concept of personhood itself. It’s a lot deeper than just “a robot learns to talk like a gangster and shoot a gun.” It asks what makes a human a human. If a robot can make his own decisions, is he human?

Many noted Chappie as a blemish on the history of science fiction films, but word of mouth and reputation only fueled that negative mass opinion. In fact, Chappie doubled its budget at the box office.

If you sit down and watch the film, Chappie proves to be something incredibly rare: a one-off sci-fi story that isn’t afraid to exist by itself and poses challenging questions about human nature.

Chappie is now streaming on Netflix.