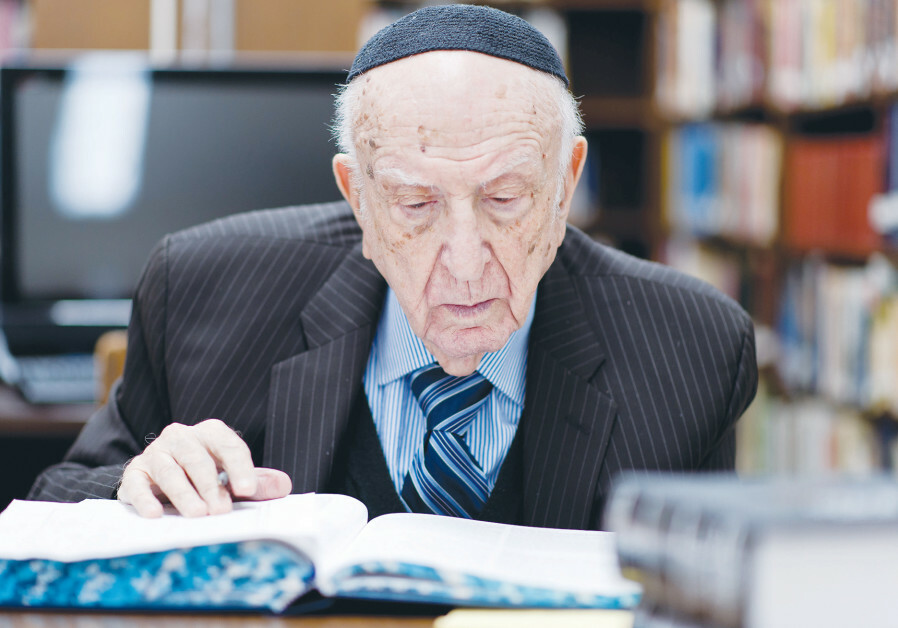 The Yeshivah of Flatbush family is mourning the passing of Rabbi Dr. David Eliach, principal emeritus of the Joel Braverman High School in Brooklyn, New York. Rabbi Eliach transformed modern Jewish education and inspired thousands of individuals and a vast number of programs with his innovative personality and ideas. For the Yeshivah of Flatbush, his passing is a deeply personal and painful loss.

Everyone who knew Rabbi Eliach, knew that he was Flatbush; his vision, leadership and mission were at the core of the yeshiva’s existence and purpose. “He was its ultimate resource, its sage adviser and its standard of excellence,” said former JBHS associate principal Jill Sanders. With a quiet dignity and respect for all, he guided Flatbush for almost 70 years.

Rabbi Eliach was born in Jerusalem in 1922 to a well-known Karliner Hassidic family and was an eyewitness to life in the days before, during and after the establishment of the State of Israel. As a young man, he learned in Hebron Yeshiva and was one of the seven founders of Yeshivot Bnei Akiva. In the early 1940s, he was a teacher and director at Meshek Yeladim Motza, an institution for child survivors of the Holocaust. In 1949, he became principal of Children’s Village in Kfar Batya, which was one of the first residential educational institutions in Israel to deal with orphaned children of the Holocaust. “I became a father, mother, teacher and friend to the children,” he explained.

Yeshivah of Flatbush alumnus Rabbi Abraham Cooper, associate dean and director of Global Social Action at the Simon Wiesenthal Center, was a student of Rabbi Eliach in the 1960s. Honoring his teacher’s 98th birthday, Cooper wrote, “It is largely through your brilliance and mesirat nefesh [selfless dedication] and that of the brilliant staff you assembled that young students like me were empowered with an amazing education but, more importantly, with a love for Hashem, the Jewish people and the State of Israel. I still feel your guiding hand in many situations in my work on behalf of Klal Yisrael [the Jewish people].”

During his tenure as principal at JBHS from the early 1950s until late 1990s, Rabbi Eliach would open the door to every classroom on a daily basis in order to gauge the progress of the teaching and learning in all subject areas. “Rabbi Eliach was always a ‘teacher’s teacher’ who understood that the number one factor which influenced a successful educational experience was the quality of the teacher in the classroom,” said Rabbi Joseph Beyda, JBHS head of school.

In Judaic studies, Rabbi Eliach expected to hear Hebrew and see a board that clearly mapped out the lesson using his own quintessential method that he taught new faculty, graduate students, colleagues and other professionals. He helped new teachers develop their own methodology and classroom management and gave them opportunities to use their talents in creative and meaningful activities. Rabbi Eliach and his late wife – Prof. Dr. Yaffa Eliach, historian, author, and scholar of Judaic studies and the Holocaust – often opened their home to students for Torah learning and conversation.

“Learning permeated every aspect of his being,” observed their grandson Ayalon Eliach.

Rabbi Eliach’s first priority was to instill in all students a love for God, the Jewish people, the State of Israel and the importance of caring for others. Long before community service became popular, he instituted it as a high school graduation requirement. When he initiated post-high school study in Israel, Rabbi Eliach went every year to visit the schools, review their curricula and meet with recent Flatbush graduates to discuss their learning.

“His scholarship, mentorship and leadership profoundly influenced the yeshiva day school movement in America,” noted Rabbi Haskel Lookstein, principal emeritus of the Ramaz School in New York. JBHS former faculty member Shifra Hanon recalled how Rabbi Eliach, anticipating the arrival of Russian and Syrian Jews, sent her for training in ESL and Learning Differences and added, “He was uniquely positioned to shape the education of generations of students. He rose to this new challenge, understanding and foreseeing the coming developments.”

In 1992, Rabbi Eliach was awarded the Covenant Award for Excellence in Jewish Education. During his acceptance speech, he said he felt “destined” to be a Jewish education teacher. He explained that as Jews we have to “immerse our whole body” in Jewish culture and values.

After Rabbi Eliach retired as principal in 1997, he continued working in the Yeshivah of Flatbush as a mentor for teachers. Even with his unparalleled depth of knowledge and experience, he spent hours preparing his sessions. The rabbi was “infinitely patient, while maintaining a true standard of excellence and never tolerating mediocrity or complacency,” said Rabbi Binyamin Krauss, principal of SAR Academy in Riverdale, New York. Even during the coronavirus pandemic, he continued his mentoring by phone and never missed a session.

“With every passing day, we continue to hear stories of students and educators who were impacted by Rabbi Eliach,” noted Rabbi Dr. Jeffrey Rothman, Yeshivah of Flatbush executive director.

Former JBHS head of school Rabbi Dr. Raymond Harari, himself a student of Rabbi Eliach, spoke at the funeral, which was held in JBHS. “I was recently assigned a new office. There were two names on the door – mine and Rabbi Eliach’s, his name slightly above mine. I could not be happier to have a constant reminder of what I should aspire to.”

Rabbi Eliach is survived by a brother, three children, and many grandchildren and great-grandchildren. He published a Hebrew-language autobiography in 2018, Avar Shelo Avar, and Shurot, (Gefen Publishing, 2020) a book of Hebrew poetry.

The writer is a Yeshivah of Flatbush communications specialist and worked with a team of dedicated JBHS contributors on this piece.