At the tip of Hong Kong’s iconic former airport runway on Victoria Harbour that once connected the financial hub with the world, masked officials from the city and the mainland last week celebrated the completion of a hastily built Covid-19 quarantine center.

The four-story Kai Tak Community Isolation Facility, replete with lifts, air conditioning and individual toilets, is one of nine centers totaling 50,000 rooms constructed with Chinese help after an omicron wave infected much of the city. Officials in the former British colony praised Beijing and gave the thumbs up sign while standing behind a banner that read: “Central Authorities Support Hong Kong; Fight Epidemic With One Heart.”

Run by the security bureau, with jail sentences for residents who refuse orders to go, the center symbolizes the dilemma facing Hong Kong 25 years after Britain handed over the city to Beijing: Its border with mainland China is effectively closed, but Hong Kong doesn’t have the autonomy it once enjoyed to open to the world. That’s put its future as a financial center in doubt as businesses shift workers to more accessible locations like Singapore.

Hong Kong officials recognize the situation is dire. The government recently downgraded its annual economic growth forecast to a range of 1-2%, although banks like Goldman Sachs Group Inc. see expansion of just 0.3%.  While many in the political and business elite fully embraced Beijing’s efforts to quash the pro-democracy opposition that participated in historic street protests in 2019, they’re now trying to figure out how far they can veer from the mainland’s rigid Covid policies as the city loses its competitive edge.

Outgoing Chief Executive Carrie Lam used what autonomy she had to reduce mandatory hotel quarantine for incoming travelers to seven days and resisted lockdowns despite hundreds of new daily cases. But those measures are still far short of what the business community wants, leaving Hong Kong largely off limits for travel as the rest of the world gets moving again.

In private conversations with diplomats, Lam has said she doesn’t have the power to eliminate quarantine even though she personally wants to open up to international travel, according to a person familiar with the situation. In an interview with Bloomberg this month, Lam acknowledged that Hong Kong’s quarantine policy “weakens our position as an international city” without saying when or how it might change.Asked to comment on Lam’s discussions with diplomats, a government spokesperson referred to her comments made June 14, when she said it wasn't a question of political will to relax quarantine rules. Loosening restrictions just weeks before the start of the new administration would only cause confusion if they were then tightened, she said at a media briefing.

Now it’s up to incoming leader John Lee, a former cop who helped lead the crackdown on Beijing’s critics and ran unopposed, to help Hong Kong reassert the “high degree of autonomy” promised in the Basic Law governing the city. While his health chief has suggested the quarantine period could be reduced further to five days, Lee hasn’t articulated how Hong Kong can both open to the world while also seeking to meet Beijing’s strict conditions to opening the land border with the mainland. China announced on Tuesday it will halve quarantine for inbound travelers.

“Continued isolation from the international community is showing signs of considerable damage to not only to our economy, but also to our reputation as a financial center,” said Ronnie Tong, a member of Lam’s governing Executive Council. “And so the pressure on the Hong Kong SAR government is building up more and more towards opening our borders, to the outside world. And I think we are moving towards that direction, albeit on a very gradual basis.”

Hong Kong will be looking for some sort of reprieve when President Xi Jinping visits this week in his first trip outside the mainland since the pandemic began. It will also be his first appearance in Hong Kong since the 2019 protests. The unrest spurred his government to impose a national security law on the city, resulting in the jailing of key pro-democracy figures and giving Beijing a much more prominent role in making decisions. That tighter grip has spurred outrage among the US, UK and other nations.

At the time the security law was unveiled, Hong Kong officials said it was mainly targeted at a few activists and said the stability it brought would reassure the business community. Yet the pandemic has shown the erosion of autonomy in the wake of the protests has affected almost every aspect of policy making in the city.

The British-style bureaucracy is also being overhauled to make it more more united and patriotic. Civil servants have been blamed for holding up policies by asking too many questions about their feasibility and purpose, according to a top official who has worked in the government since the 1990s who asked not to be identified. Officials are also holding fewer press conferences and meetings with key stakeholders to avoid scrutiny, multiple civil servants said, increasing the risk of poor policy making.The government has always adopted a proactive approach to the principles of openness and transparency, and disseminates information to the public through various channels via the media, a government spokesperson said. Last year the government held more than 1,370 press conferences, the spokesperson said.

Hong Kong’s best path in the short term may be appealing to Beijing’s self interest, not least because Xi could use some economic optimism. China’s economy is struggling under sporadic Covid lockdowns ahead of a Communist Party meeting later this year at which he’s expected to secure a third term in office.

Over the long term, Hong Kong’s importance as a gateway between China and the rest of the world means the Communist Party wants the city to continue operating separately, despite closer integration with its hinterland. Initiatives such as the Greater Bay Area will bind the city better to the tech hub of Shenzhen and the former Portuguese colony of Macau.

Hong Kong’s differences with the mainland are what makes the city valuable. Its peg with the greenback allows Chinese companies to raise cash in the world’s dominant currency while remaining within the nation’s borders -- an advantage that has become more important since Beijing’s increased scrutiny of overseas listings discouraged companies from selling shares in the U.S.

Since Xi came to power a decade ago, he has opened two stock links in Hong Kong, a bond connect and a channel for wealth products. Another focusing on exchange-traded funds is in the pipeline. Just this month, the central government sold 7.5 billion yuan ($1.1 billion) of offshore bonds in the city.

“We are running our own financial system, we are running it our own way and I think China respects that,” said Jeffrey Lam, a member of Lam’s de-facto cabinet and a city lawmaker. “Hong Kong is in full autonomy of that.”

Still, Hong Kong is vulnerable to Beijing’s political campaigns. Xi’s crackdown on the nation’s tech firms and overseas listings in recent years spurred outflows from the city’s stock market and paralyzed corporate fundraising. When Ant Group Co.’s planned Shanghai listing was pulled by Chinese authorities in late 2020, Hong Kong’s exchange was forced to follow suit. New share sales by Chinese firms in the city this year has fallen to $1.8 billion, the lowest for a first half since 2009, and a drop of 93% from a year earlier. Corporate bond sales by mainland companies have shrunk to $63.1 billion, down 39%.

While Xi’s appearance in Hong Kong despite a raft of Covid cases suggests some endorsement of the city’s strategy to effectively live with the virus, there’s still no visibility whether he’ll allow quarantine-free travel with either the mainland or the world.

The lack of clear decision-making in the city has led to confusion and triggered an exodus of residents. Earlier this year, the government weighed moves to emulate the mainland’s playbook of lockdowns and mass testing during an omicron outbreak. Then as cases rose exponentially, Liang Wannian, a Chinese health expert tasked by Xi’s administration with advising Hong Kong, publicly instructed the city’s leaders to shift their focus from a strategy of sending all positive cases to hospital to lowering the death rate.

While Hong Kong has allowed home isolation for positive cases, authorities recently restarted centralized quarantine for certain variants. It remains unclear if isolation facilities like the one at the old Kai Tak airport will be put to use in the coming months or sit empty.

Hong Kong’s ability to serve as a bridge between the mainland and the rest of the world requires a certain trust from the international community that Hong Kong will be able to make autonomous decisions, said Dongshu Liu, assistant professor specializing in Chinese politics at City University of Hong Kong.

“Although the central government wants to separate the political and non-political side, I don’t think other countries treat those two sides of the coin as separate,” he said. “Will the rest of the world trust Hong Kong? That’s more and more uncertain now.” 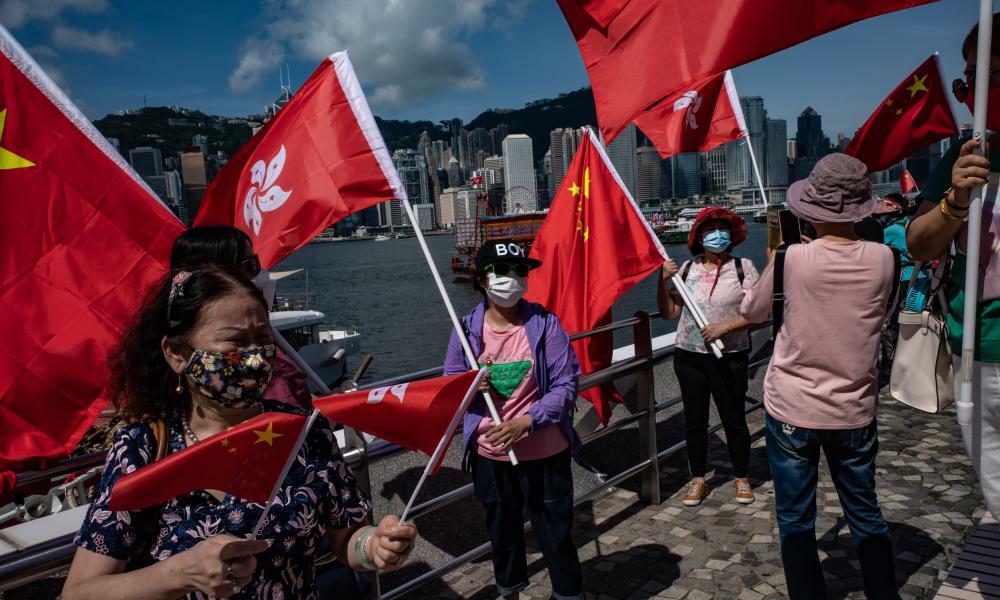 The Guardian - UK
One subscription that gives you access to news from hundreds of sites
As China tightens grip, Hong Kong’s luster as ‘world city’ dims

Tens of thousands of residents are exiting the former British colony as Beijing reshapes life in the city.