The world of football has united to offer praise and support to Jake Daniels, after the 17-year-old Blackpool forward came out as gay.

The Football Association said Daniels, the first male professional footballer in the UK to come out since Justin Fashanu in 1990, was “an inspiration to us all”.

In a statement the FA said: “We fully support your decision to be open about this part of yourself. Football is a game for all, with diversity at its heart, and this is a hugely positive step as we strive to build an inclusive game that we can all be proud of. We are with you and hope your story will help to give people across the game the strength and encouragement to be their true self.”

Daniels has also received support from several prominent footballers, former players and pundits, after making the announcement on Monday with the help of his club, Stonewall and Sky Sports.

“Massive credit to you and the way your friends, family, club, and captain have supported you,” wrote the Tottenham and England forward, Harry Kane. “Football should be welcoming for everyone.” The Manchester United goalkeeper, David De Gea, praised the teenager for his “amazing courage and bravery”.

“It’s been a brilliant season for you on the pitch, and now through your bravery, off the pitch too,” the BBC Match of the Day host, Gary Lineker, wrote. “I’m sure you’ll receive huge love and support from the football community and many others will follow your path. Good luck to you.”

The former United defender Rio Ferdinand tweeted: “Massive respect for this brave decision. Let’s all help create a safe and supportive environment for LGBTQ+ people in football and beyond!”

Thomas Hitzlsperger, who came out as gay shortly after his retirement, wished Daniels a wonderful career and said he was glad to see he had the support of his club and Stonewall.

Ferdinand’s former teammate at United, the ex-England defender Gary Neville, said on Sky’s Monday Night Football programme that Daniels’s announcement “will go down in history” and could change the dressing-room culture in men’s football.

“What he has just done takes incredible courage,” Neville said. “In a dressing room, that would seem like the unthinkable to announce you are gay. I can’t imagine how difficult that has been. All I would say is it’s a day of great importance for Jake and his family, but also for English football. It is a big, big moment for football.

“The game has not dealt with this issue well at all. We know that now it is something that is acceptable from a fan point of view, but it’s not yet got into the dressing room. A dressing room can be an evil place … you think about the peer pressure and vulnerability. The way in which Jake spoke was absolutely incredible.”

Neville’s colleague, the former Liverpool defender Jamie Carragher, said: “I know the [Blackpool] manager Neil Critchley, I had a relationship with him at Liverpool. Neil will be a huge support mechanism for Jake because he will need that going forward. It’s not just about Jake, it’s about the football club and their role within it and it’s an example going forward for other clubs.”

Elsewhere, the Professional Footballers’ Association said it was “extremely proud of Jake … he has the complete support of everyone at the PFA”. The EFL chief executive, Trevor Birch, said: “We hope this moment helps take us forward to a time where LGBTQ+ representation at all levels of the men’s game is the norm.”

Tony Burnett, chair of the anti-discriminatory campaign group Kick it Out, said football has “a renewed responsibility to [Jake] and the LGBTQ+ community at large … to ensure that he receives the right support now, and can continue on his footballing journey like any other 17-year-old”.

Burnett said: “This is a big story, and a historic day in English football, but we need to remember that there is a young man at the heart of it. A young man who should not have to be defined by this one moment, or this one part of his identity. We wish Jake a long and successful career in football.”

Stonewall, which will continue to offer Daniels and Blackpool “ongoing support”, said: “We are proud that Jake has felt able to share his truth with the world. Football is ready for this moment and we believe it has been for some time. This is an opportunity for everyone to support Jake and show football is everybody’s game.”

In their own statement, Blackpool FC said they were “incredibly proud [Jake] has reached a stage where he is empowered to express himself both on and off the pitch”. The club added: “It is vital that we all promote an environment where people feel comfortable to be themselves, and that football leads the way in removing any form of discrimination and prejudice.” 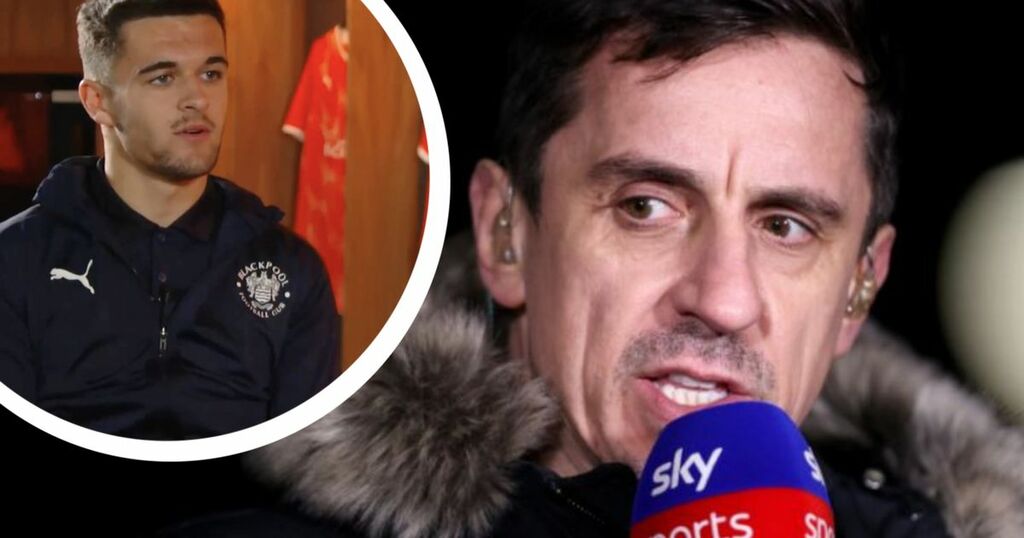 Gary Neville hails Jake Daniels as he becomes first UK footballer to come out as gay in 32 years
"It is a big, big moment for football"