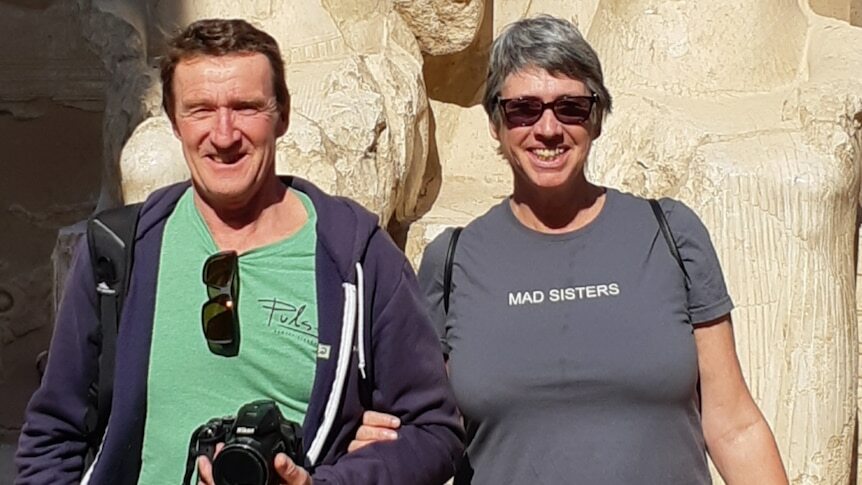 Clare Hooper is one of many Australians who have family abroad. She has found the distance between her loved ones has become even more apparent when attempting to travel to the United Kingdom for her mother's funeral.

Ms Hooper has been living on the NSW Far South Coast in Narooma and was recently denied a travel exemption to fly overseas for her mother's funeral in late August.

She is angered that there seems to be a double standard for Australians, depending on their professional status.

"My mother died a few weeks ago. I applied for an exemption to go to her funeral to support my 92-year-old father … and I was told my reason wasn't compelling enough.

"If you can play football, you can act and you're a film star or you've got a lot of money you have a much better chance of doing anything than someone who is as boring and untalented as me."

Mr Morrison travelled to Sydney on Friday, which he does not need an exemption for, and spent several days in his home city, including Father's Day, before returning to Canberra yesterday.

The Prime Minister has defended the trip, arguing criticism of his travel is nothing more than a "cheap shot".

The ACT and NSW are both in lockdown and permits are required to travel into the capital.

Federal politicians are considered essential workers and Mr Morrison is subject to a Level 3 stay-at-home order, meaning he can move between the Lodge and Parliament House for essential work.

The Prime Minister's office said he had received approval from ACT Health to return to the capital, with several conditions, including restricted movement while in the ACT.

For Ms Hooper, even if the Prime Minister's travel was permitted under the health orders, she said it was morally wrong and wished she was given the same leniency.

"I have no idea [who made the decision]," she said.

"I assume it was some bureaucrat somewhere who let ScoMo disappear off and have a nice time with his family."

Ms Hooper said despite being fully vaccinated the Australian Department of Home Affairs denied her request.

Ms Hooper's mother died at the end of June and she was attempting to try and attend the funeral on August 20.

Instead, she watched the service on a streaming service.

"The streaming service was actually very good, I think I heard more than the people in the church [could hear]," she said.

"But it hasn't been easy that's for sure."

In a statement the Australian Border Force said it was unable to comment on individual cases due to privacy reasons.

A spokesperson said there were a number of reasons for exemption, including to attend a funeral, but that sufficient evidence must be provided in their application.

"Requests may be finalised without further consideration if insufficient evidence is provided," a spokesperson said.

"Each case is unique and considered individually based on the information and supporting evidence provided in the application."