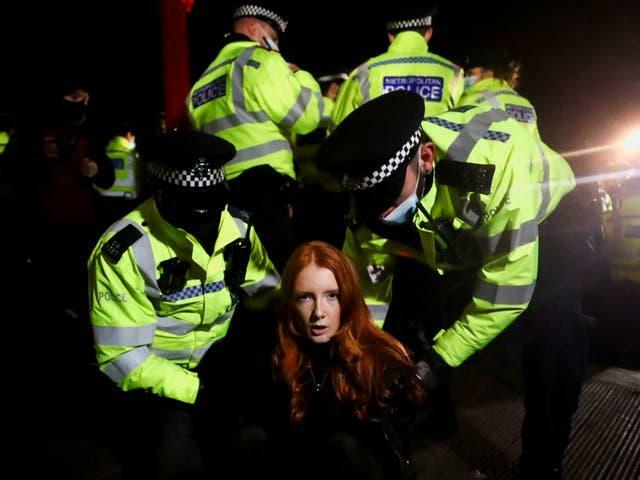 A woman whose image went viral after she was arrested at a peaceful vigil for Sarah Everard in March has spoken out about being “terrified” after police officers made contact with her on the dating app Tinder.

Patsy Stevenson attended a vigil in Clapham Common a week after the death of Sarah Everard when, while yet to submit a plea or be sentenced, serving police officer Wayne Couzens had been charged with her murder.

In what became a point of controversy, police dispersed the vigil and handcuffed and fined Stevenson because the event took place while coronavirus restrictions on large gatherings were still in place. The Metropolitan Police were later exonerated completely by a report from the policing inspectorate.

Speaking to the BBC, Stevenson said about 50 police officers and security guards had liked her profile on Tinder: “They were all in uniform on their profiles or it said ‘I’m a police officer’.

“It is almost like an intimidation thing, saying, ‘Look we can see you’, and that, to me, is terrifying.

“They know what I went through and they know that I’m fearful of police and they’ve done that for a reason.”

Meanwhile, reflecting on the vigil, Stevenson said the event was “a turning point”, where “everyone realised we actually we all go through the same things”, but the “sombre atmosphere... turned very scary very quickly” after police started trying to disperse the crowd.

She is suing the Met over her treatment.

She said the police needed to start “taking accountability” for officers’ actions and the Met’s advice that women should flag down a bus if they have concerns when stopped by an officer was “part of the problem”.

“Stop telling women how to change their behaviour just to stay alive,” she said.

In a statement issued to the Guardian, the Met urged people to contact them if they are concerned about an officer’s conduct on social media.

They said: “We have contacted the individual who has spoken about these concerns to offer our support and make enquiries. At this time we have not received complaints in relation to this incident, but we will to continue to liaise with them about the circumstances so we can establish whether any misconduct may have occurred, and determine the appropriate next steps.

“Officers must abide by our high standards of professional behaviour both on and off duty. If someone believes that an officer’s conduct or behaviour on any social media or internet platform falls below these standards we would urge them to please contact us so that it can be properly investigated and appropriate action taken.”

indy100 has also contacted the Met to comment on this story.

Policing minister slammed for ‘lack of urgency’ around violence against women