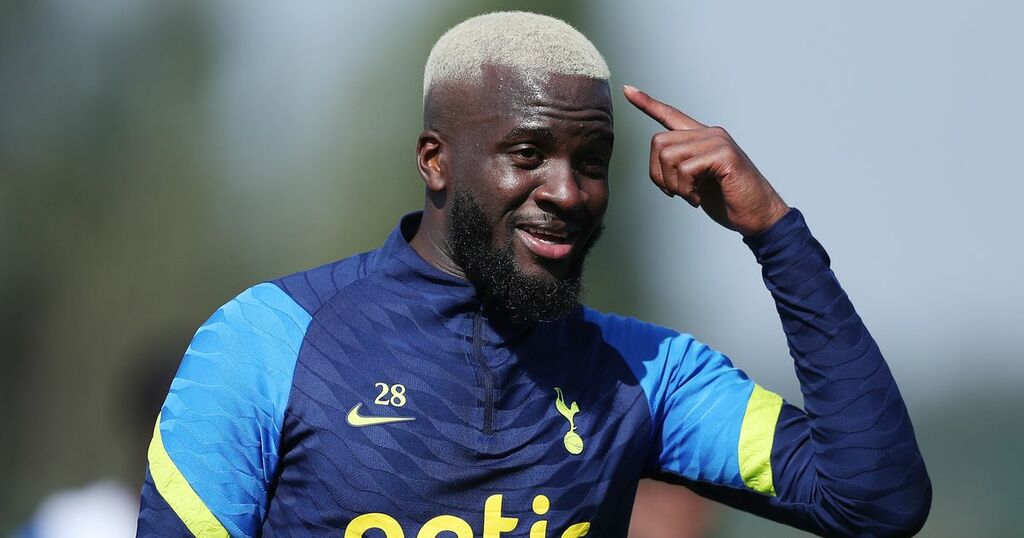 It was a performance to sum up a week of utter farce with Tottenham Hotspur at its centre.

It took just 12 minutes for the decisions of summer signing Cristian Romero and Davinson Sanchez to head off for their international call-ups, along with Giovani Lo Celso, to play in red listed South American countries to come back to haunt Tottenham.

Just to rub it in further, all those South American countries who had asked FIFA to ban the others players who did not accept call-ups dropped their grievances, meaning other clubs were not affected.

Even Eric Dier's injury was avoidable, Hugo Lloris rolling the ball too far past the Spurs defender so he had to stretch and collide with a Palace attacker.

He attempted to play on but could barely move, a physio eventually having to guide him slowly and painfully down the touchline and back to the changing room.

Then came the sending off of Japhet Tanganga, who had been excellent in central defence until he got himself too pumped up after a scuffle with Wilfried Zaha and launched into another unnecessary challenge soon after that yellow card.

The footballing gods also decided to ensure the joke continued as another Spurs centre-back Cameron Carter-Vickers scored on his debut on loan at Celtic.

Even with all of that, including the fact that Tottenham were shorn of six players who all probably would have either started or been on the bench, there was no excuse for the lack of creativity on display.

It started with Nuno Espirito Santo's line-up, with the Portuguese feeling the need to play all three of his more defensively-minded midfielders in Pierre-Emile Hojbjerg, Oliver Skipp and Harry Winks.

The idea looked to be to provide the full-backs with the ability to charge on in a 4-3-2-1 formation and hurt Palace down the flanks, pinning Zaha back in his own half.

Instead it resulted in a performance that will have had Tottenham fans worrying whether their fears were being realised of simply seeing just another version of Jose Mourinho, one without the silverware on his CV.

Tottenham's managing director of football Fabio Paratici had needed to convince chairman Daniel Levy that that wasn't the case when he pushed the Portuguese's claims for the job in the summer.

The Italian showed the Spurs supremo clips of Espirito Santo's Valencia side in his first season in Spain to emphasise that the football that could be played under the Portuguese could realise the promise the chairman made to the fans of attacking, entertaining football.

Those watching the game at Palace on Sunday might have been forgiven for wondering if those video clips were of someone else's team.

Spurs were abysmal in everything they did going forward. There was no creativity, no drive and no movement among the attacking players.

Whenever a Tottenham player had the ball, they looked up to find nobody ahead of them to pass to. Emerson Royal, on his debut, waved his arms on a couple of occasions when in possession, beckoning someone to show for the ball. This was a long way from Barcelona.

Opta's stats declared that with Spurs only managing two shots at goal in the entire match, it was their lowest shots in total in a Premier League game since a match in August 2005 against Blackburn Rovers.

Harry Kane, one of the world's best strikers and creators, may well as have been replaced by a cardboard cut-out on Saturday afternoon, such was his lack of impact on the encounter.

A near complete absence of service was mostly to blame but we've also seen Kane grabbing games by the scruff of the neck before and firing Spurs to points they perhaps did not deserve.

Yet at Selhurst Park it was the first time ever Kane has not touched the ball in the opposition box or had a shot in a game he's played 90 minutes in. That said it all.

When asked by football.london whether he was concerned about the lack of creativity on the day, Espirito Santo replied: "It is a big concern, we had enough quality and talent to play better.

"We didn't do it, credit to Palace they were aggressive and they didn't allow too much time on the ball. We lost duels, many, many situations that I think we should do much better. In terms of offensive, much improvement is required."

The Portuguese pushed aside a question about not using Tanguy Ndombele or Bryan Gil with little thought.

There perhaps was a touch of frustration at something that clearly had caught everyone's eye when the team was announced and had proven to be right by the course of the game.

Managers understandably hate it when their tactical decisions are picked apart by hindsight, but this one seemed glaring without it.

For the absence of either Ndombele or Gil from the pitch at any point, let alone in the starting line-up, remains a mystery.

Espirito Santo was clearly not impressed with Ndombele during the summer, with the Frenchman wanting to leave the club and not being in his view the required mental state to be included in matchday squads, in pre-season as well.

Yet with weeks' worth of training at Hotspur Way, plus almost a fortnight after the transfer window closed and the two men are believed to have held positive talks about this coming season, it's difficult to imagine Ndombele wasn't fit enough to start the game.

Espirito Santo may well have felt that Winks, who showed a desire to stay at Tottenham in the summer despite interest in taking him away, deserved to be rewarded with the start.

The problem is that Winks can't do what Ndombele can and particularly in a team that already had Hojbjerg and Skipp, the Frenchman was needed as a matter of urgency.

His ability to keep the ball, dribble past his man, creating space for others and the creativity to thread a pass through to the attackers was something Tottenham desperately needed on the day.

Dele Alli worked hard in his own half but was disappointing in the other. His attacking game has always been about the finishing rather than the creating. Lucas showed plenty of willing and some of his running in the first half was electric, but it came with no end product.

Instead of playing, Ndombele was left to watch on from the sidelines.

Before kick-off, after walking along in deep conversation with the laughing Pierluigi Gollini, he had purposefully sought out his compatriot Patrick Vieira, the Palace boss, to speak to him in the dugout.

Tottenham fans will see the former midfielder as an Arsenal man, but for Ndombele he would have been a World Cup-winning midfield inspiration for him as a youngster.

It's difficult to see how Ndombele would not have inspired Tottenham to be better than they were.

Gil almost got on the pitch - twice - before Tanganga's red card and before Palace's second goal. Both times Espirito Santo changed his mind.

"He didn't come on because I didn't decide to put him on first," said the Spurs boss. "Like you say, I think you saw, our idea previously was just the right moment, then the precise moment we're to make the sub we're made one man less and we had to find the balance of the team again, to go for a defender, so the decision was made based on that."

Unfortunately for Espirito Santo, that defender was Ben Davies and the Welshman gave away the penalty that opened the scoring for the hosts.

Gil is one of Spain's highest-rated young attacking players and during his loan spell at Eibar, he proved that even at one of La Liga's strugglers he could create more chances than most, which makes it all the more bewildering he never made it on to the pitch after the obvious defender change.

Espirito Santo will be questioning his players tonight but he hopefully will also question whether his own line-up did Tottenham any favours.

It's very early in the tenure of a man who has just won the Premier League's manager of the month award, which shows just how quickly football comes at you.

Espirito Santo needs to make sure that this performance was a blip. He's previously bemoaned the need for more attacking improvement, even in the victories, which suggests he does want attractive football even if this line-up suggested otherwise.

Ndombele and Gil will both get their chance in midweek against Rennes and they need to convince the Spurs boss that he can trust them.

Some fans are ready to label Espirito Santo as Mourinho 2.0 and with derbies against Chelsea and Arsenal up next in the Premier League, sandwiching a Carabao Cup match against his old team Wolves, the solid start to the season could swiftly be undone.

Espirito Santo said he wants to make the Tottenham fans proud. To do so he needs much more than he and his players provided at Selhurst Park.