Why is China increasing its military pressure on Taiwan?

By Helen Davidson and Chi Hui Lin in Taipei 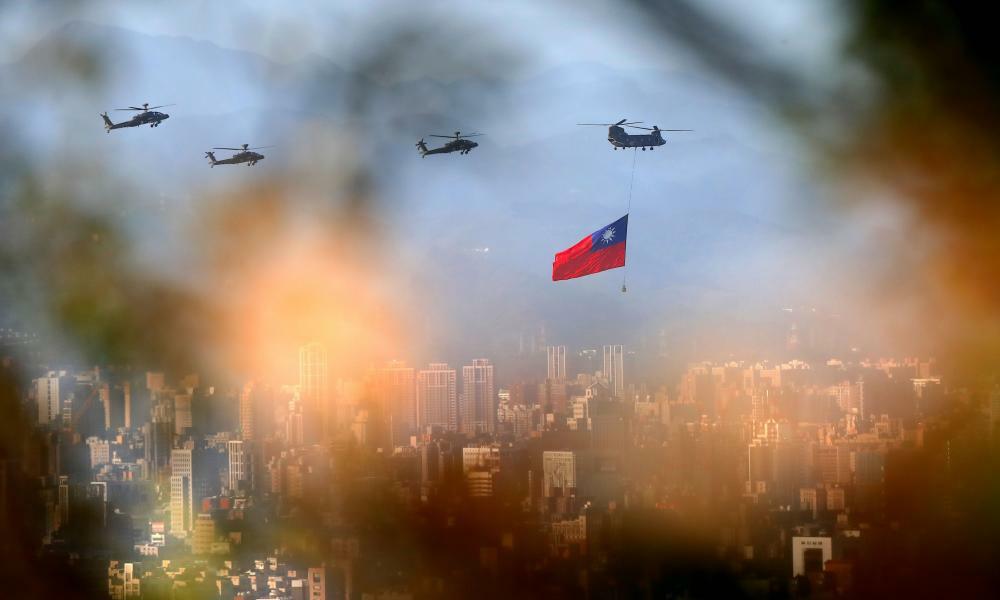 Last week, China sent about 150 warplanes into Taiwan’s air defence identification zone (ADIZ), in a massive escalation of its military activity directed towards the island. Over the past two years, the People’s Liberation Army (PLA) has increased its activity, with near-daily sorties into the ADIZ and frequent military drills in nearby maritime areas.

Tracking data of the sorties shows a change in the makeup of the PLA air force missions. While surveillance aircraft were the most frequently sent, the balance has now tipped to see fighter jets dominate. The use of bombers, capable of carrying nuclear weapons, has also increased.

Speculation is growing China will try to mount an invasion. Estimates range from within a few years to decades.

On Wednesday, Taiwan’s defence minister claimed China was capable now, but by 2025 would much more easily be able to launch a “full-scale invasion”.

What does China want?

Beijing claims Taiwan as a province of China. Unification is a key goal of the Chinese leader, Xi Jinping, who has not ruled out taking Taiwan by force. Beijing regards Taiwan’s democratically elected government as separatists but the island’s president, Tsai Ing-wen, has said Taiwan is already a sovereign country with no need to declare independence.

Taiwan holds democratic elections, has a free media, its own military and currency. It has enjoyed de facto independence since the end of the civil war in 1949, when the losing Kuomintang faction fled to the island. The Chinese Communist party has never ruled Taiwan.

Few countries recognise Taiwan’s government, many having transferred their formal ties to Beijing from the 1970s onwards. Beijing’s “one-China principle” formally declares its claim over Taiwan, and various other nations have their own “One China” policies, which lay out the level of recognition their governments afford Beijing’s policy. The US and Australia, for example, acknowledge but do not recognise Beijing’s claim over Taiwan.

Large-scale activities are often connected to specific events – Friday marked China’s patriotic holiday, National Day – or signalling Beijing’s grievances with a recent incident. After the US condemned the incursions of 38 planes on Friday and 39 Saturday, China sent 56 planes into the ADIZ on Monday.

Bonnie Glaser, the director of the Asia programme at the German Marshall Fund, said the flights were increasingly used for training, but also “to signal to the United States and Taiwan not to cross Chinese red lines”.

What is the difference between the ADIZ and airspace?

There has been a lot of confusion over the area in which China’s warplanes are flying. They are not entering Taiwan’s internationally recognised airspace, which would mark a significant and hostile act. Under international law, a state has sovereignty over the air above its land and sea territory.

Not all states have declared ADIZs, which are large areas stretching beyond the airspace, and are monitored for defence purposes. Governments require aircraft entering to provide notice. The PLA does not do this.

Taiwan’s ADIZ does cover parts of China’s mainland, but Taiwan does not report “incursions” until the planes have crossed into the Taiwan side of the median line.

How is the world responding?

The international community is increasingly condemning China’s belligerence towards Taiwan. Major changes in the US relationship with Taiwan and China began under Donald Trump and his secretary of state, Mike Pompeo. The Biden administration pledged to continue the tough line on China and “rock solid” commitment to Taiwan, but has also demonstrated it is a multilateral effort.

This week, the US accused Beijing of “provocative military activity” that was “destabilising, risks miscalculations, and undermines regional peace”.

Last month, the US, UK and Australia announced a new security partnership, Aukus, aimed at countering China’s actions in the Indo-Pacific. It raised questions for the UK prime minister on whether the country could be drawn into a war over Taiwan, which he did not rule out.

The US maintains a policy of strategic ambiguity in an effort to deter action by either side.

In April, the EU jointly declared tensions in the South China Sea were threatening regional stability, while French warships have participated in joint exercises with the US and Japan, and Germany recently sent a warship for the first time in two decades.

How is Taiwan responding?

On Tuesday, President Tsai wrote that Taiwan would not be “adventurists” but would do “whatever it takes” to defend itself, and warned the fall of Taiwan would see “catastrophic consequences” for the region.

The island’s premier, Su Tseng-chan, said Taiwan “must be on alert” to China’s behaviour.

“The world has also seen China’s repeated violations of regional peace and pressure on Taiwan,” he said, adding that Taiwan needed to “strengthen itself” and come together. “Only then will countries that want to annex Taiwan not dare to easily resort to force.”

Taiwan is vastly outgunned by China’s military. The government is buying up weapons from the US but the defence analyst Dr Si-fu Ou has said there is a years-long lag while Taiwan builds the required infrastructure.

Taiwan has also lobbied for intelligence and logistical support from other nations.

Taiwan is deepening relationships with governments such the US, EU, Australia, Japan and India (even if they are not offering to restore ties just yet), and emphasising its importance in the global economy, particularly as leading supplier of semiconductors – the chips that run the world.

How do the Taiwanese feel?

On Tuesday, Taipei residents woke up to the sound of warplanes over the city. It was a Taiwan air force rehearsal for Taiwan’s upcoming national day, but those who did not know were rattled. People talk about the China threat in school, at family dinners, and at friends’ gatherings. The defence ministry’s Twitter account has become part of people’s daily news feed.

A number of analysts the Guardian spoke to say there is a distinct lack of focus on how Taiwanese people view the situation, and how they would be affected.

“In all of the talk about flash points, war and US-China competition, we rarely hear about the history and hopes of 24 million people that live in a peaceful democracy,” said Natasha Kassam, a China analyst at the Lowy Institute.

Polling in April showed about 40% of people believe Taiwan and China are heading towards military conflict, but that figure is rising. Another survey this year found 50% of people are worried there may be a war in the coming year.

While there are diverse and complicated political views in Taiwan, separate polling last October found 77.6% of people were willing to fight in the event of a Chinese invasion. Other studies have found most support diplomatic efforts.

In the meantime, life goes on. Taiwanese have grown up through martial law, war, or their families memories of it. Drills and military exercises are part of daily life. Taipei Metro is packed in rush-hour every day, and karaoke rooms were in full swing on the night China sent its 56th plane for the day. But fears are growing.