Why Iran Is Downplaying Israel Assassinating Its Officials

On May 22, Col. Hassan Sayyad Khodaei, a senior official of Iran’s Islamic Revolutionary Guard Corps (IRGC), was sitting in his car in Tehran when he was shot and killed by an armed motorcycle squad. In Iran, he was mourned by thousands of people who attended his funeral and hailed him as a hero for taking on the Islamic State. In the Israeli press, however, he was derided as the man who plotted a series of terror strikes against Israeli diplomats in India and Thailand and who was tasked with abducting Israelis and foreigners abroad. Iran promptly blamed Israel for his killing and vowed to avenge him.

Khodaei was just one of seven Iranian officials and scientists who appear to have been killed since late May, but his death was the only one Iran would officially pin on Israel, even though there is little doubt among U.S., Iranian, and Israeli analysts and former security officials that the killings are part a covert war between the two countries. Nearly all of the Iranians who died—a geologist, two engineers, and two members of the IRGC’s aerospace unit—appear to be linked to either Iran’s nuclear facilities or the military infrastructure Tehran aids its proxies with.

“Israel never acknowledges that it has acted to kill Iranians, but it is typically assumed that the Israelis have been responsible for a number of killings and attacks,” Dennis Ross, a Middle East negotiator who has worked for several U.S. presidents, told Foreign Policy. “That is certainly the case with the killing of officials linked to the IRGC or scientists driving the Iranian nuclear program.”

Yet while Israel has, according to analysts, upped the ante of shadow warfare with Iran through its spike in alleged assassinations, Iranian officials appear to be underplaying the killings.

For instance, a week after Khodaei’s death, Ayoob Entezari, an aerospace engineer who worked on missile-related projects at an IRGC-run research and development center in the Iranian city of Yazd, fell sick and died after returning from a dinner party, the New York Times reported. The host of the party has since vanished. In 2019, Khodaei was photographed with then-Iranian President Hassan Rouhani, indicating he may have been an important cog in Iran’s defense machinery. At first, a governor called Entezari “a martyr” while a city council member described his killing as a case of “biological terror.” But officials later backtracked, saying labeling Entezari a martyr was an error. They also claimed he was not an aerospace engineer, as reports indicate, but rather an ordinary employee.

The attacks have made the Iranian government “extremely suspicious” about the reliability of its security measures.

When Foreign Policy asked an Iranian analyst believed to be close to the government about the recent killings, the analyst—to whom I’ve chosen to grant anonymity to discuss a sensitive topic—feigned ignorance and responded with texts like “Who are they?” and suggestions that a colonel is not a very senior rank.

U.S. and Israeli analysts believe Tehran responded this way because it was embarrassed and saw the killings as an intelligence failure amid Israel’s escalation of covert warfare. Farzin Nadimi, an associate fellow with the Washington Institute, told Foreign Policy that the recent killings, alongside attacks on Iranian military infrastructure and cyberattacks on state-owned services, “significantly damaged Iran’s perceived deterrence” and “showed Israel’s determination and freedom of action in Iran.”

The attacks have made the Iranian government “extremely suspicious” about the reliability of its security measures, Nadimi said. “As a result, they have to divert significant time and money away from their projects toward hardening their facilities and reevaluating the loyalty of their workforce.” Most of the attacks, he said, are believed to be “inside jobs.”

The recent spate of attacks, analysts and security officials said, stem from Israel’s fear that Iran is the closest it has ever been to building a nuclear weapon while also continuing to arm its militias in the region, which present a direct threat to the Israeli state.

Iran has continued to enrich weapons-grade uranium at 60 percent purity levels since the former Trump administration unilaterally withdrew from the 2015 nuclear deal four years ago. It’s a little short of the 90 percent needed to build a nuclear bomb but far above the nuclear deal’s cap of 3.67 percent. At the same time, Tehran has continued to manufacture its arsenal of drones and missiles for its regional proxies. Militant group Hezbollah in Lebanon alone is estimated to have a stock of 150,000 missiles targeted at Israel, according to Israeli media.

Analysts said the recent uptick in assassinations of Iranian officials as well as last week’s capture of Iranian agents allegedly plotting to abduct Israelis in Turkey indicate that the covert war between Iran and Israel is intensifying—and bodes poorly for regional security, threatening to culminate in a full-blown conflict.

Eran Lerman, former deputy director for foreign policy and international affairs at Israel’s National Security Council, hinted at further escalation in line with Israel’s policy to do whatever it deems necessary to address security threats from Iran. Although some analysts have wondered at why Israel is targeting lower-ranking officials, Lerman told Foreign Policy via encrypted communications that while he could neither confirm nor deny Israel’s role in the recent killings, “every key member in Iran’s nuclear and military apparatus is not necessarily a general.” He added: “Israel is aware of who is doing what and is trying to send a message to Iran to stop its destabilising activities or it could get much worse.”

As long as Tehran keeps transferring weapons to militias and seeks to build its leverage on states in the region, “little will change, and the risk of a wider conflict will be real,” Ross said. “My sense from discussions with Israeli security officials is that they are prepared to do much more if Iran does not take a step back.”

Indeed, on June 7, outgoing Israeli Prime Minister Naftali Bennett admitted to a strategic shift vis-à-vis Iran and said Israel had moved into “a higher gear” to contain the Iranian threat. “We are acting at all times and places, and we will continue to do so,” he said at a meeting of the parliamentary foreign affairs and defense committee.

If there is further escalation, Iran—which just appointed a new commander, Brig. Gen. Mohammad Kazemi, to head the powerful intelligence service of the IRGC, without giving an official reason for the leadership change—will likely resort to actions short of war yet detrimental to Israeli, regional, and global security. It could, for example, threaten freedom of navigation in the strategic Strait of Hormuz—through which around a fifth of the world’s oil trade passes. This would cause already high oil prices to further skyrocket as well as disrupt supply chains.

Meanwhile, Israel sees any method short of outright war that delays Iran’s plans, increases the costs of carrying out its policies, exposes the weaknesses of their government to the Iranian people, and possibly discourages the country’s foot soldiers as worth the effort and risk. The expansion of covert war tactics and spy games between Israel and Iran is here to stay. 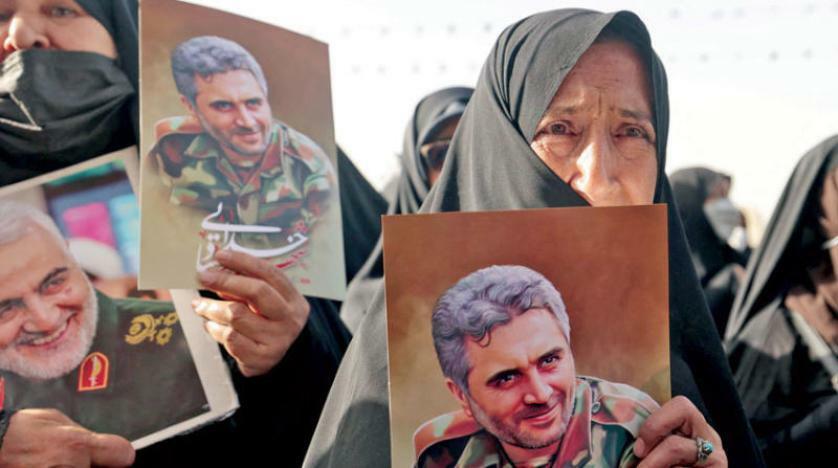 Asharq Al-Awsat
One subscription that gives you access to news from hundreds of sites
Israel’s Spies Have Hit Iran Hard. In Tehran, Some Big Names Paid the Price.

For more than a decade, he was a feared presence in Iran, presiding over a vast intelligence apparatus.

Outsourcing Middle East Security to Israel Is a Bad Plan B