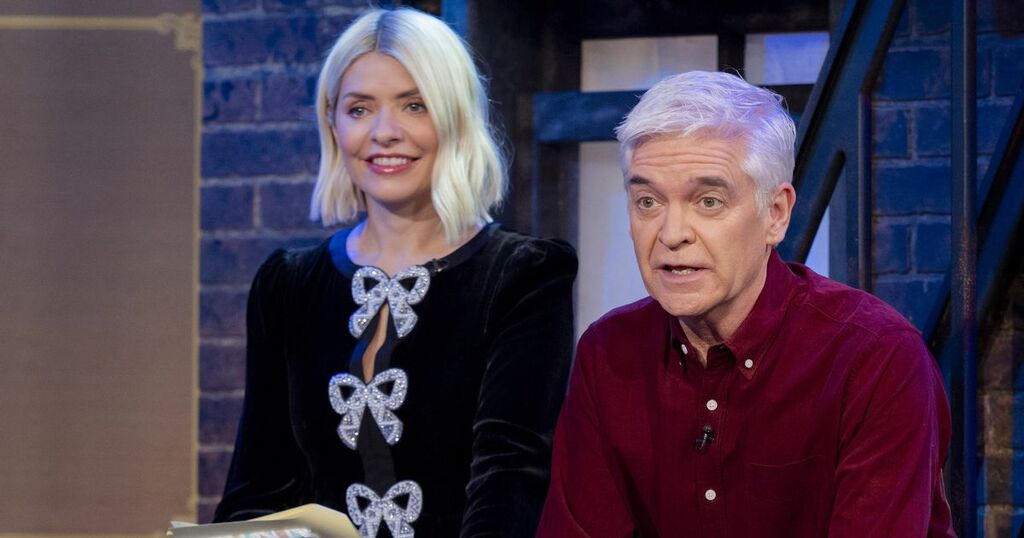 Holly Willoughby has been popping up on a number of TV channels recently - but this isn't the case for Phillip Schofield.

While Holly is given the freedom to take part in BBC shows, and is even taking time off her regular job to film one, her This Morning co-host is confined to ITV.

After years of loyalty to ITV, Holly joined forces with The Chase host Bradley Walsh in 2019 to present BBC game show Take Off with Bradley & Holly before a full series last year.

At the end of last year she also appeared on the Christmas special of Michael McIntyre's The Wheel - something which Phillip simply isn't allowed to do.

The reason why there are different rules for the This Morning co-hosts has to do with their contracts.

It was actually funnyman Michael who let slip about Phil's secret TV deal while they were discussing him making an appearance on The Wheel.

On This Morning in November, Michael teased Phillip when he revealed that Holly was in the Christmas special.

When Phil noted how good the guests are, Michael replied: "Amazing guests, Holly was on our Christmas special.

"You're on some kind of exclusive deal to ITV so we can't get you," he then blurted out, adding: "We're desperate for you Schof."

Trying to move the conversation along quickly, Phil replied: "I also don't have a specialist subject."

Phillip is on a 'golden handcuffs' deal at ITV, which are used by TV companies to make sure their top talent cannot be poached by rivals.

They were particularly popular in the late 90s, with ITV getting actors such as Robson Green, Sarah Lancashire and Ross Kemp locked in.

But recently they have made a resurgence again as Danny Dyer and Stacey Dooley were both on big money deals to stay with the BBC.

The BBC had been rumoured to be considering pinching Phil when his contract at ITV came to an end in 2021.

In 2020, it was reported the BBC were trying to lure the veteran This Morning host away with a multi-million pound offer.

However, if said discussions took place they were unsuccessful as Philip signed a brand new deal last year - even getting a bumper payrise to around £750,000 a year from This Morning after the show was extended by 30 minutes.

But Phillip is obviously allowed to participate in other ITV shows, making guest appearances on Celebrity Juice, and is also the host of Five Gold Rings, The Cube and Dancing on Ice.

Meanwhile, Holly is free to go wherever she wants and is reportedly being given two weeks off from This Morning to work for the BBC.

Holly is set to present Wim Hof's Superstar Survival, which will see a whole host of famous faces take on Europe's harshest conditions in a bid to tackle their demons, alongside comedian Lee Mack.

A source told The Sun: "Holly loved I’m a Celeb so much it gave her the confidence to strike out on her own and do more mainstream solo TV projects. Holly did an excellent job filling in for Ant and was one of the highlights of the show that year.

"She has high career ambitions and is starting the year as she means to go on."

The insider added: "However, she absolutely loves This Morning and her on-screen partnership with Phillip, so isn’t going anywhere long-term. She’s just grateful ITV bosses are giving her the freedom to do her own projects."

In November last year, it was revealed exclusively by The Mirror that Holly had been "secured" on This Morning for at least another two years.

As part of her ongoing deal with ITV, Holly has been given a bumper contract to remain on the daytime giant until at least the end of 2023.

This has scuppered reports that she was on the verge of leaving following a row with her former agents, who have laid claim to a cut of her future earnings.

One insider said: "It seems like everybody wants that gig but Holly is very much secured for the next two years on a rolling contract."

Holly herself has confirmed she is going nowhere and can't imagine a world where she's not working with feel.

"I never think like that. I feel very lucky to be on that show. The show changes so much, I think that’s the beauty of This Morning," she said.

"Recently it’s had the highest ratings it’s had in 15 years. It’s doing really, really well which is extraordinary for a show that’s been around for as long as it has. And I think because it changes and it evolves and it adapts."