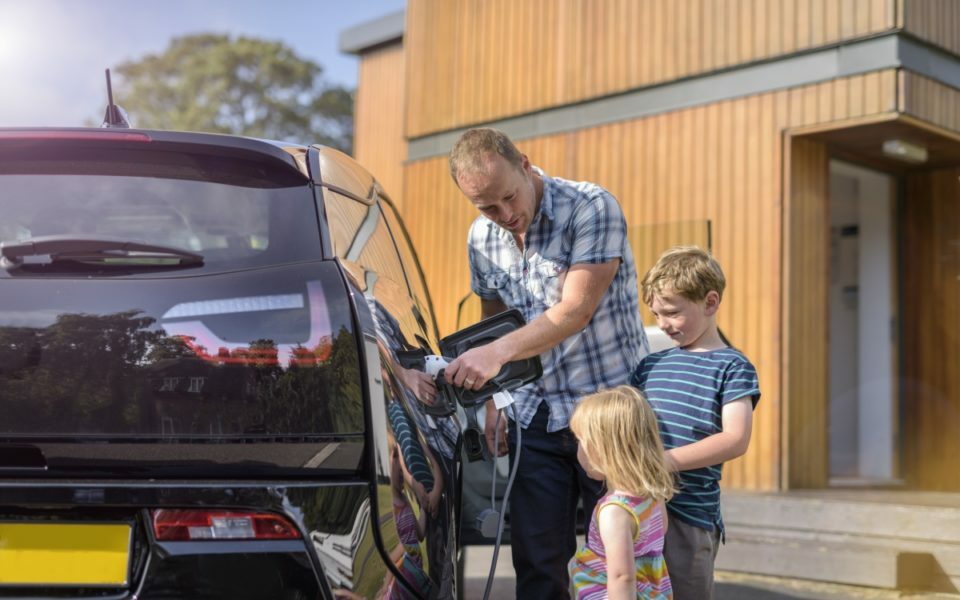 Analysts say Australian motorists are missing out on cheaper electric vehicles due to government inaction on climate change, with new data revealing local models are far too expensive to compete with petrol cars.

As Australia falls further behind other nations on EV adoption, research published by Compare the Market on Friday gave us a clue about why.

The report found it would take 16 years of driving for an EV in Australia to become cost competitive with a petrol vehicle thanks to an upfront price difference of $40,000.

With figures like that it’s no wonder EVs account for just 0.7 per cent of new car sales in Australia, compared to about 15 per cent in the UK.

It’s not for lack of desire, either. A separate survey on Friday revealed more than half of local motorists want to buy an EV in the coming years.

He said Australians can only purchase a small range of expensive EVs, compared to markets in Europe where the cars are almost half the price.

“The challenge is to get a broader range of models into the Australian market,” Mr Posner said.

“To do that there needs to be regulation or fuel standards that demand reduced emissions.”

To understand how much Australians are paying, let’s break it all down.

That means despite fuel costs for petrol vehicles averaging $2531 a year compared to just $55 for the EV, it would take 16 years before the higher priced local EV was cost competitive with a local petrol car.

If you bought a cheaper EV catch-up time would be a lot less, but these economical EV models aren’t available in Australia.

The analysis uses a pricey Hyundai Kona SUV, but even if you went for a cheaper vehicle the best deal you could get would be about $50,000.

As the chart below shows, if you were buying in the UK you could pick up six different cars for less than $40,000.

And those prices would finish up even cheaper because of government incentives – and overall there are far more EV models in the UK market than here. 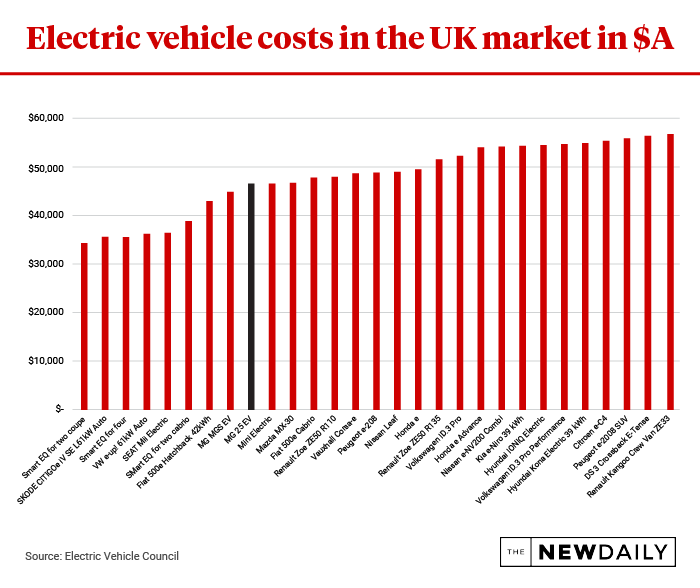 Why we miss out on cheaper EVs

Analysts say fuel standards are a major driver of wider availability in the US and UK; they work by giving manufacturers an overall yardstick, which they must then conform with across their total vehicle sales.

If they sell a lot of high fuel consumption cars they have to balance their  sales of low or no emissions vehicles like EVs or hybrids.

That, in turn, encourages big manufacturers to save their lower margin, cheaper EVs for big markets where emissions targets are mandated.

“Without a strong signal from government they’re more likely to send vehicles to those big markets,” Mr Posner said.

As the chart below shows, the Australian market is currently almost forgotten by the big manufacturers.

Of course car purchases are not all about price.

Many people will pay more than the base rate for a petrol car because it meets their needs or fancy.

And for those people the EV offer can be compelling, with maintenance as well as fuel costs far below those for petrol cars.

According to an Electric Vehicle Council (EVC) survey published Friday, 49 per cent of Australians see themselves driving an EV by 2030, while 54 per cent say they would consider buying one for their next car.

“There are some people for whom electric vehicles are already cheaper because of the way they use them,” EVC CEO Behyad Jafari said.

Currently EV manufacturing costs are 50 per cent higher than petrol cars, mainly because of battery prices and research and development.

However, EV prices will decrease to an average of $41,184 by 2030, The Bureau of Infrastructure and Transport Research Economics says.

Mr Jafari said EVs are also an environmental necessity, noting Australia has some of the most heavily polluting cars in the world.

“You pay absolutely nothing for the pollution you create,” he said.

“Over 10 years EVs are more expensive because taxpayers are footing the bill for a part of driving a petrol or diesel vehicle.

“But there is a price attached to pollution: it makes people sick and our environment worse.”

Victoria, however, will introduce a 2.5c a kilometre road tax on EVs.

One was the AGL Subscription Service which provides used EVs for rent for as little as $235 weekly.

“The Good Car Company imports used electric vehicles from Japan that are around two years old and can be bought for between $20,000 and $40,000,” Dr Dini said.