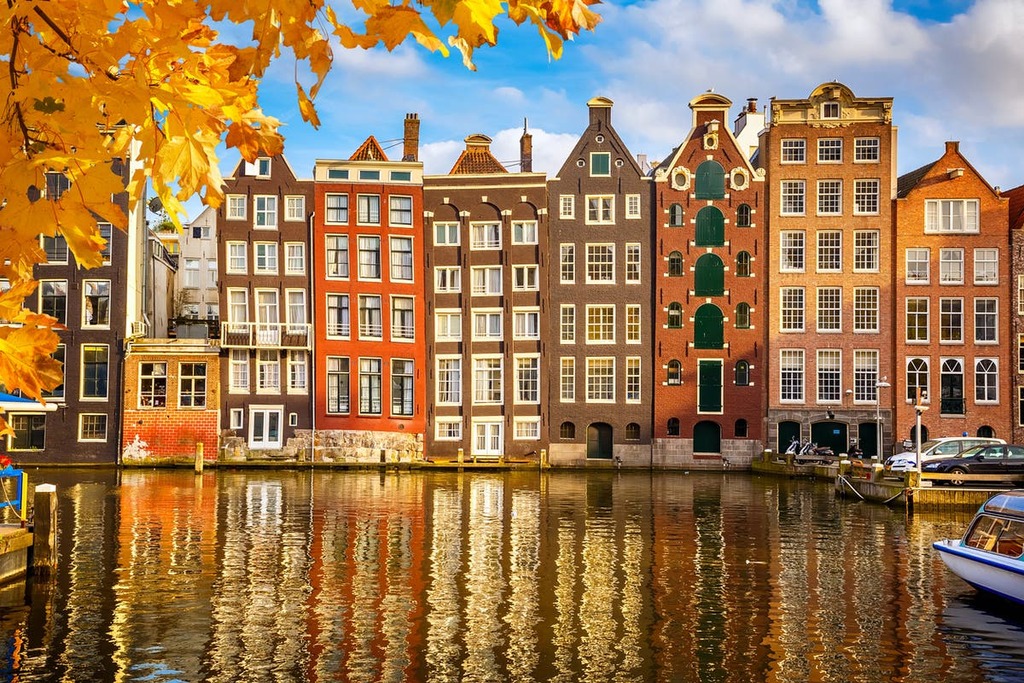 Cycling down the River Amstel, humming a jaunty tune while waving at groups of men engaged in some kind of mildly competitive boat race, it seems nigh-on unbelievable that I was in London last night.

A mere 15 hours ago I was grumpily making my way to Liverpool Street station on Friday evening to catch the train to Harwich after a, shall we say, “challenging” week. A ferry ride, metro and swift train later, it’s Saturday morning and I am pausing to take a selfie by the most quintessentially Dutch windmill I have ever seen; stopping for lunch at a trendy gastro-Indonesian restaurant on the waterfront; cycling around the hold-your-breath quiet manmade lake in the Zuid-Oost district’s Gaasperpark.

For me, there are few cities that can rival Amsterdam for sheer good looks or charisma. The canals! The gabled houses! The bridges! Even getting out of the confines of the Canal Ring for a change doesn’t dampen my enthusiasm; in fact, like reaching the deeper stage of love that follows the honeymoon period’s initial rush of chemical attraction, I find myself becoming even more enamoured with this Dutch duchess.

She can do pastoral perfection too, you say, with verdant green fields dotted by brown cows just a 20-minute cycle downriver? And she’s equally down to throw on some urban streetwear in the trendy former shipyard-turned-cultural-hotspot NDSM on Amsterdam Noord? What can’t this showstopper of a capital do?

Let you indoors without daily Covid testing, as it turns out. The Netherlands may have dropped its stringent quarantine rules for vaccinated travellers but its separate health pass app – needed to gain entry to restaurants, bars, museums and other attractions –does not currently recognise the UK’s proof of vaccination (yet another thing to blame on Brexit). It means that British visitors must take a rapid antigen test every 24 hours, uploading their negative result to the CoronaCheck app to get indoor privileges. You can sit at outdoor terraces without it but as the autumn chill draws in, you’re likely to have to do some swabbing.

I was all set to find the process arduous and annoying, stamping my foot in the true fashion of Roald Dahl’s brat Veruca Salt, but instead found Amsterdam’s testing system so straightforward that my tantrums were quickly averted. Testing is free at a multitude of sites all over the city. You go online, book a slot, stroll in with your passport and get swabbed within the space of three minutes. Fifteen minutes later, you receive your result (the website warns that this can take up to two hours but this seems more rooted in expectation management than reality).

The uploading-your-result-to-the-app bit is a touch convoluted, with various steps involving passcodes, but then you’re free and clear, ready to spend the day going inside as much as you damn well please. And, let me assure you, it’s worth the very minor irritation of going through the rigmarole.

Other tourists seem to think so, at any rate; they are already starting to flood back to the city known for its pre-pandemic struggles with over-tourism. The good news is that escaping the herd is as easy as it ever was. Simply head away from the Red Light District and seedier section of Amsterdam’s medieval centre in any direction and even within the Grachtengordel – the area around the three main canals of Prinsengracht, Keizersgracht and Herengracht that form a concentric belt around the city centre – you’ll find yourself cycling on sparsely populated paths in the space of five minutes. Lined by the prettiest buildings imaginable and bathed in soft autumn light, they make me feel as if I’ve stumbled into a Dutch Golden Age painting.

Cross the body of water known as the IJ that separates Amsterdam Noord from its mainland counterpart and things get even quieter. It’s only a five-minute (free) ferry ride away but this small distance is enough to shake off the crowds and enjoy a peaceful exploration of this formerly down-at-heel neighbourhood – now the coolest kid on the block. I lunch at Pllek, Amsterdam’s “largest green restaurant”, which champions local, sustainable producers; I spend an absorbing hour and a half at STRAAT, the recently opened street art museum that displays more than 150 large-scale works from some of the most talented street artists in the world. And, before I know it, it’s time to jump on a train at Amsterdam Centruum Station back to the Hook of Holland for my Stena Line return ferry.

I feel, if anything, even more fed and revitalised than I normally do after a weekend in my favourite European city. After two years apart, Amsterdam has lost none of her charm and even several cotton buds stuffed up the nostril can’t tarnish it.

Stena Line offers ferry passage between Harwich, Essex, and the Hook of Holland from £49 one-way for foot passengers and from £59 for one adult with a car. The company’s “rail and sail” package, which has been temporarily suspended, includes onward train travel. From the Hook of Holland, it’s a 20-minute metro ride to Schiedam Central, from where you can catch a 70 mins rail journey to Amsterdam Central.

The trendy and centrally located Kimpton de Witt has a “Ride into Fall” package, including an overnight stay, €50 (£43) credit to spend on food and drink in the hotel, complimentary use of the hotel’s bikes and access to a pre-planned bike route around the city. From £153; available until 30 November 2021. kimptondewitthotel.com