Who is Leylah Fernandez, the Canadian teen lighting up US Open? 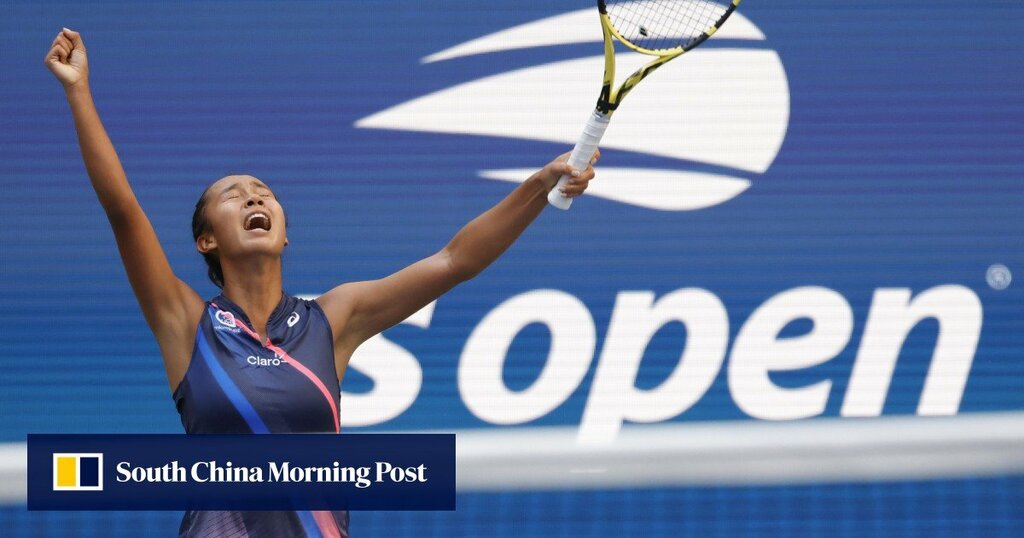 Canada’s Leylah Annie Fernandez announced herself to the tennis public at the 2021 US Open with a hard-fought win over former world number one Naomi Osaka in the third round, beating the defending champion and number three seed after losing the first set – 5-7, 7-6, 6-4.

The unseeded teenager then dispatched another former world number one and three-time grand slam winner, Germany’s Angelique Kerber, in the fourth round, again coming from a set down to win 4-6, 7-6, 6-2.

Finally, a day after turning 19, Fernandez beat number five seed Elina Svitolina of Ukraine in the quarter-finals, her 6-3, 3-6, 7-6 win earning her a place in the semi-finals of a slam for the first time.

She will play Aryna Sabalenka of Belarus, the second seed at this year’s US Open, in the semi-final of what is only the seventh major tournament of the left-hander’s short career.

The secret to all the tennis success?

Fernandez’s rise has been remarkable with the teenager joking that it is down to “maple syrup” when asked why Canadian players are performing so well at the US Open this year.

“I would say it’s the maple syrup,” she joked in an on-court interview after winning the quarter-final. “The Canadian maple syrup are very good so.” The crowd at the Arthur Ashe Stadium ate it up.

Fernandez has won over the fans at the US Open, who cheered her on to victory over Tokyo 2020 Olympic bronze medallist Svitolina, and has added a few in the wider world.

Fellow Canadian tennis player Milos Raonic has been cheering Fernandez on via social media while former Los Angeles Lakers star Magic Johnson has called her the “most exciting player at the US Open” on Twitter.

“If you haven’t seen the most exciting player at the US Open, 19-year old Leylah Fernandez, you’re truly missing out!! She just beat her 3rd ranked opponent and is on fire. She’s captivating the world!”

Fernandez’s previous slam singles best was the third round at Roland-Garros last year, after making her slam debut at the 2020 Australian Open in January. It has been some rise into the public prominence for the world No 73.

The Canadian was born in Montreal, Quebec in 2002 to an Ecuadorean father Jorge and Filipino-Canadian mother Irene, who is from Toronto.

Sister Bianca Jolie is a tennis player too, with the family relocating to Florida to develop the daughters’ talents, where Leylah is coached by her father and Romain Deridder.

We surprised Leylah Fernandez with cupcakes & a signed book by Billie Jean King on her 19th birthday! pic.twitter.com/TbWNhAvQfj

The trilingual tennis teen speaks English, Spanish and French and turned 19 in the middle of this US Open, celebrating with cupcakes and by meeting tennis legend Billie Jean King.

Fernandez is a fan of desserts, according to her WTA profile – her favourite is molten lava chocolate cake, and the teenager is no stranger to being snapped with the sport’s greats.

She has been photographed with Roger Federer and fellow Quebecoise Eugenie Bouchard, in whose footsteps she followed by winning a junior grand slam.

Fernandez also spent some time at the Rafael Nadal Academy in April, with the Spanish clay master starring in the first slam that she watched back in 2007.

After winning in Paris, Fernandez said that her idols were “Henin, Nadal, Federer and Djokovic” adding that her dream is to follow in their footsteps.

“I want to win all the grand slams and be number one,” she said.

Fernandez had a strong showing as a junior. She did not drop a set on her way to that French Open victory over number eight seed Emma Navarro of the US in the final. That same year, she reached the girls’ final at the Australian Open.

Since turning professional, the Canadian won her first ITF Tour singles crown at the 2019 Challenger Banque Nationale de Gatineau in her homeland where she beat Carson Branstine.

Fernandez has two other final appearances, both of which came in 2019 at the Challenger Banque Nationale de Granby in Canada and the ITF Waco in Texas. All three tournaments were played on hard courts.

She won the 2021 Monterey Open in Mexico in March to claim her first WTA Tour title. She did not drop a set on her way to the final where she beat Viktorija Golubic. She was also a finalist in Acapulco last year.

Fernandez reached her career high singles ranking of world No 66 in June this year – ahead of making her Olympics debut in Tokyo – and she is set to climb higher up the rankings when they are updated. How high depends on what happens next.