Ohio State fans get it, and the rest of the college football world will, too — eventually.

When Urban Meyer rode off into the sunset, he literally handed the whistle to an up-and-coming talent, Ryan Day, who is going to continue to rise in the ranks to become a coaching star. He now has some of the respect the OSU brass and supporters knew would come, but he still doesn’t have the namesake others that have won national titles and been around longer do.

Perhaps nobody put it better than where Day lands on the list of best coaches (subscription required) by ESPN’s Adam Rittenberg recently. He came up with his own ranking of the best college football coaches recently and divided them into four tiers.

Day has done a ton of winning since his arrival. He seems to understand how to do things off the field, and he recruits at a high level. Yet, reviews are still mixed. After all, he inherited one of the all-time college football programs that was already winning a bushel of games and trophies.

Still, Rittenberg tried to slate Day into one of his four tiers — and the top one at that — labeled national contenders. Here is a ranking of all of those coaches that fell in the top tier, and what Rittenberg says about Day .

“Five years ago, Day was a mostly unknown assistant working with J.T. Barrett, Joe Burrow and Dwayne Haskins in the Ohio State quarterback room. His rapid rise underscores his coaching talent, and he has made Ohio State — not known for elite quarterback play — a top spot for elite signal-callers. Day didn’t lose a Big Ten regular-season game until last year’s finale against Michigan, and reached the CFP in his first two full seasons at Ohio State. He also inherited one of the best jobs in American sport, from one of the Big Ten’s most historically dominant coaches in Urban Meyer. Day ultimately must win the national title to rise on this list.”

NEXT … What We Say

10
What we say about Ryan Day's spot

It’s hard to be too picky with where Rittenberg has Day because he’s only been coaching at Ohio State for three full years. His record will speak for itself when it’s all said and done, but we do think he’s one of the best in the business. It seems not having a national title is holding him back but there are guys above him on this list without a national title, so I’m not sure the statement that he has to win won to be elevated against guys like Lincoln Riley or Brian Kelly makes sense. He’s a top three coach with what he’s done off the field with mental health and players’ performance in the classroom, his unbelievable 34-4 record, a CFP win (that should have been two), and his recruiting. But again, time will take care of that. Watch.

Note: To get a look at the other three coaching tiers and the coaches in each, visit the piece (subscription required) on ESPN and get a look for yourself.

Let us know your thoughts, and comment on this story below. Join the conversation today. 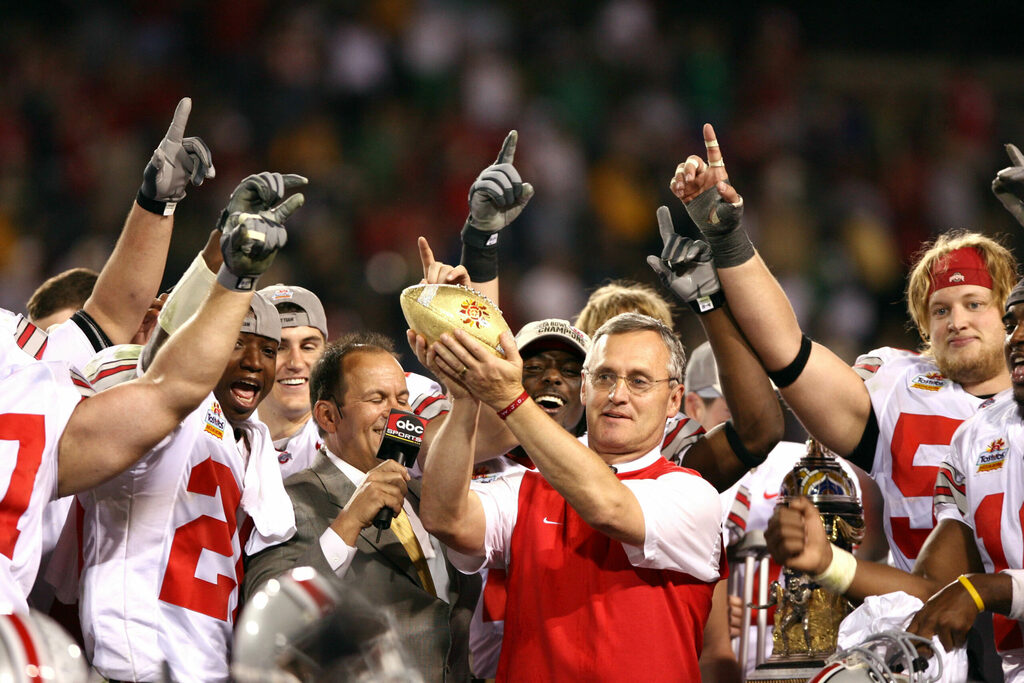 Ohio State football’s starting and ending AP Poll ranking since 2000
Where Ohio State began and ended in the AP Poll each year since 2000. #GoBuckeys

USA Today Sports Media Group
From analysis to the latest developments in health, read the most diverse news in one place.
‘Best one they’ve had since I’ve been here’, says anonymous Big Ten coach about this Ohio State player

A ranking of Big Ten football programs by the most Chicago Tribune Silver Football's won (Player of the Year). #GoBucks

Can you guess how many, and who from Ohio State made this list? Did anyone not make it that should…

Here are all the Ohio State football players and the preseason award watch lists they appear on. #GoBucks

What do you think of where Joel Klatt has Ohio State in his final preseason college football rankings? #GoBucks