What’s up in college football? Everything at once — with every man out for himself — and it’s dizzying

Pads are popping, whistles are blowing, boosters and would-be agents are slithering around like snakes in the grass. College football training camps are here, and that’s my annual cue to rise and shine and try to get the lay of the land.

So, did I miss anything?

Holy mother of goalposts, I did.

There isn’t any one way to trudge into the chaos of college football that makes better sense than any other, so let’s throw a dart at the map and start at the University of Oklahoma. What was the offseason like there?

Let’s see, one former can’t-miss quarterback recruit, Spencer Rattler, jumped into the transfer portal after losing his starting job and ended up at South Carolina. Another five-star blue-chipper, Caleb Williams — who replaced Rattler deep into the 2021 season — ditched Norman to follow his coach to USC. That coach is Lincoln Riley, who signed a $110 million deal, the richest for a college coach at the time, and now has a $17.2 million oceanfront home. Riley’s replacement, first-time head coach Brent Venables, reached into the portal with both hands and snatched QB Dillon Gabriel, who absurdly ended up transferring from UCF to UCLA, then from UCLA to OU in the same offseason.

Oh! And I almost forgot: Oklahoma, the big bopper of the feisty Big 12, agreed — along with chief rival Texas — to leave that league in utter shambles by jumping to the almighty Southeastern Conference.

All that in one offseason.

All that at just one school.

Hey, how about that transfer portal — more than 2,000 players entered it this offseason. Finding the perfect new player is easier than ordering socks on Amazon, and every coach in the country has a shopping addiction. There’s no loyalty among players, not that there should be. Why should former No. 1-ranked QB in the country Quinn Ewers spend more than a year not starting at Ohio State when he could leave for Texas and potentially not start there, either? QB J.T. Daniels has gone from USC to Georgia to West Virginia, where he’ll finally get back on track to NFL superstardom (unless he doesn’t). Big-time SEC players now move between league powerhouses like no one will even notice.

Bless the players for going where the opportunity — and certainly the NIL money — is best because coaches are as ruthless as robber barons when it comes to signing on the dotted line. Georgia’s Kirby Smart one-upped Riley with a new $112.5 million deal. LSU got Brian Kelly from Notre Dame for a modest $95 million. Alabama’s Nick Saban, Texas A&M’s Jimbo Fisher, Clemson’s Dabo Swinney and Michigan State’s Mel Tucker all inhabit $10 million-a-year territory, too. Wait — Tucker, the ex-Bears defensive coordinator? Didn’t the Spartans have the Big Ten’s bottom-ranked defense in 2021? Just a trifling detail, it seems.

A real lowlight of the offseason (or was it a highlight?) came when Saban accused Fisher of “buying” Texas A&M’s No. 1-ranked recruiting class. Fisher went off in response, blasting Saban as a “narcissist” who “thinks he’s God” and has a shady past reporters ought to “dig into.” And these two are great friends, or at least they were.

But that’s nothing compared with how the Big Ten and commissioner Kevin Warren kneecapped the poor Pac-12. Anybody else remember the so-called Alliance declared in late winter among the Big Ten, Pac-12 and Atlantic Coast Conference? Those three leagues voted against a 12-team playoff model that they felt would favor the competitively superior SEC, nipping in the bud something many fans of the college game would love to see. Warren espoused a “holistic” model that “needs to make sense not only for the Big Ten [but] for everyone.”

Then the Pac-12 blinked, and the Big Ten robbed it of its largest, most important market, entering into agreements to take on UCLA and USC.

A 16-team playoff could be on the near horizon. The playoff will favor the SEC and the Big Ten at whatever expanded size it reaches, you can count on that. The Big Ten, with Fox as its primary partner, is closing in on a billion-dollar media-rights deal. It’s the only league that has a chance to keep up with the SEC now.

How long until Notre Dame joins the Big Ten? Or will it squeeze enough millions out of NBC to continue as an independent? Which path is riskier?

But now my head is spinning. Maybe yours is, too. And August is still a day away. 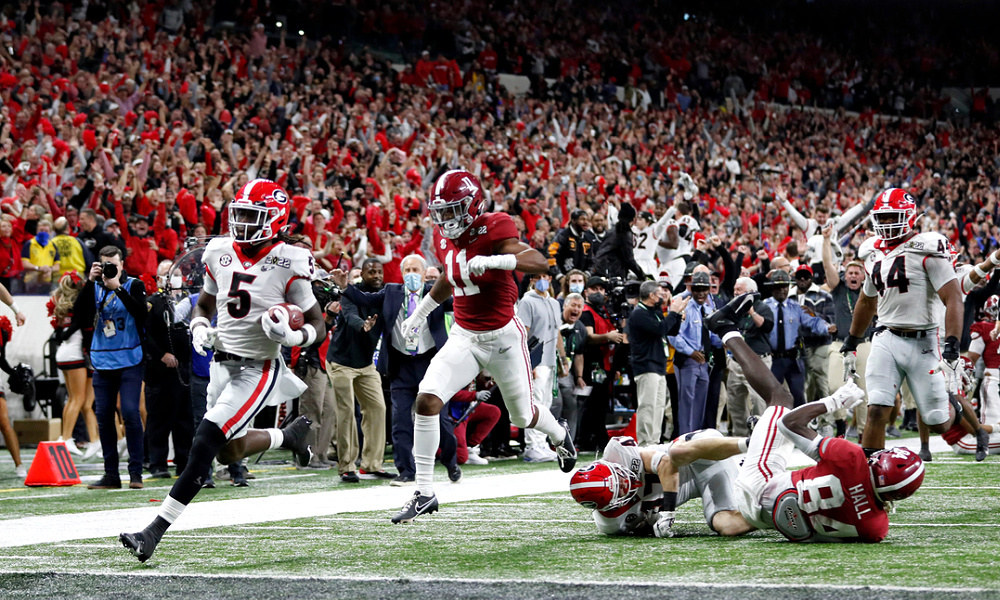 USA Today Sports Media Group
From analysis to the latest developments in health, read the most diverse news in one place.
USC president Carol Folt ‘shut down’ potential Pac-12 expansion plans last year
LOS ANGELES — Late last summer, opportunity knocked on the Pac-12’s door. Texas and Oklahoma were off to the Southeastern…

Who are the best players in the SEC going into the 2022 college football season? They're highlighted in the CFN…

Top 10 College Football Offenses: Which Os are the most talented going into the 2022 college football season? How good…

Who are the best players in the Pac-12 going into the 2022 college football season? They're highlighted in the CFN…

USA Today Sports Media Group
One place to find news on any topic, from hundreds of sites.
Lincoln Riley on Pat Narduzzi's tampering accusations: I take it personally
LOS ANGELES — Three months after a fellow coach accused him of tampering with the top wideout in college football,…