What is 'living with Covid'? Boris Johnson drawing up plans 'to be rolled out in March' 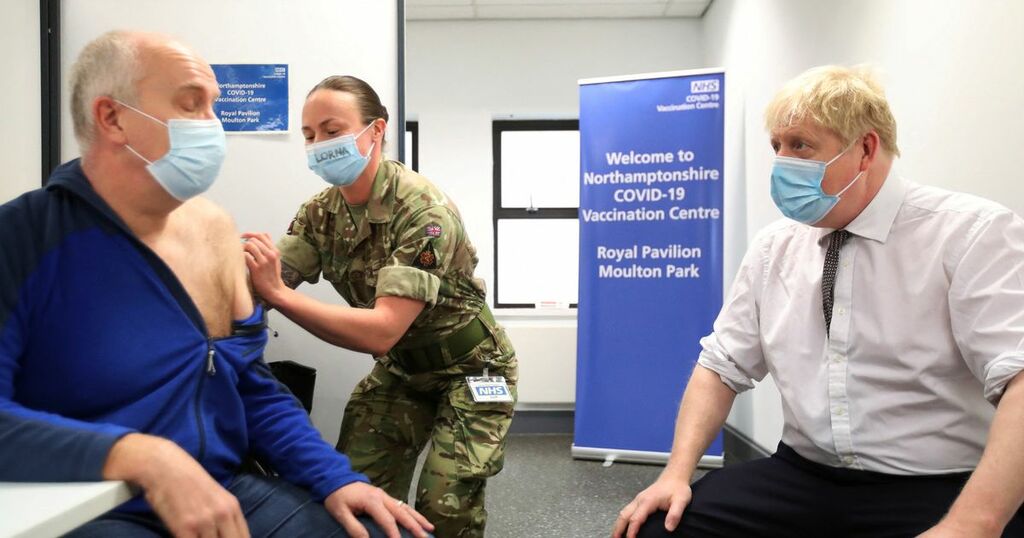 The Government is drawing up plans for a "living with Covid" strategy which is reported to be aiming to be rolled out in March - but what could it entail?

Plans aim to avoid any long-term restrictions in a bid to get the nation back to some form of normality since the first lockdown in March 2020.

The Prime Minister is expected to axe free lateral flow tests for non-high risk situations and a reduction in isolation periods.

It comes as the UK's official Covid death toll passed 150,000 in a tragic milestone on Saturday.

This means the UK is just the seventh country to pass the devastating landmark, following the US, India, Brazil, Mexico, Russia and Peru.

More than 1.2 million cases have been confirmed in the past week across the UK as the Omicron variant rips through the country.

Last week the Office for National Statistics (ONS) said it estimated a staggering one in 15 people in England had Covid in the final week of 2021.

Boris Johnson has insisted England will "ride out the Omicron wave" sweeping Britain without new restrictions.

And with signs that the Omicron variant is less severe than previous strains, the former head of the UK's vaccine taskforce, has suggested that Covid should be treated more like flu.

Dr Clive Dix, chairman of the government agency from December 2020 until April, also thinks booster jabs should only be given to people the most vulnerable Brits.

He said: "It is pointless keeping giving more and more vaccines to people who are not going to get very ill. We should just let them get ill and deal with that."

While Dr David Speigelhalter, warned that people "are going to catch it and might catch it again" and would have to get used to it.

Boris Johnson is aiming to implement his "live with Covid" strategy by March, Daily Mail reports.

A government spokesman has denied that it is aiming for that month and “the exact format of that and what it will look like has not been decided”.

Asked if Covid will become endemic, he added: “That is certainly our expectation that at some point that’s where we will get to. That has been the nature of previous epidemics, previous pandemics, that is the advice we’ve received…. exactly what point we’re on is still too early to say.”

We explain all the rule changes that have happened so far and could happen.

Free lateral flow tests could soon be shelved for most of the public within weeks, it has been reported.

Under plans reportedly being weighed up by officials, the tests could soon only be available in "high-risk" settings such as care homes, hospitals and schools.

However government sources have disputed the report and said it is too early to say what will happen with the tests, while Education Secretary Nadhim Zahawi said there were "absolutely not" any plans to do scrap them currently.

The move would also see the NHS Test and Trace service scaled back, The Sunday Times reports.

Call for the isolation period to be shortened

The Education Secretary Nadhim Zahawi has argued the self-isolation period should be cut from seven to five days.

The top Tory said shortening the time people have to isolate with the virus would "certainly help" ease workforce pressures.

Mr Zahawi became the first Cabinet Minister to publicly back a reduction in the quarantine period, which has been imposed in the United States for asymptomatic cases.

Mr Zahawi said the UK Health Security Agency (UKHSA) was reviewing whether to move to a five-day quarantine for asymptomatic people who are vaccinated and have tested negative on lateral flows for two days.

But the UKHSA recently said it could be "counterproductive" as people leaving isolation might still be infectious - which could worsen staff shortages.

From Tuesday anyone who tests positive for Covid by lateral flow will not have a PCR test providing they have no symptoms.

The rule change will affect around 40 per cent of people with Covid but they will still have to isolate for at least seven days.

The isolation period will now start from the date of their positive lateral flow test.

Currently, people have to start their isolation period from when they test positive on a PCR, the results of which may take days to come back.

The change - last performed in January-March 2021 - will effectively cut the isolation time because it takes a couple of days to get and await the result of a PCR test.

Social distancing ditched in most surroundings

The two metre social distancing rules were scrapped on July 19 when most restrictions were ditched.

However the one metre should still be enforced in specific places such as airport arrival halls and if you test positive and are on your way to self-isolation.

The rules for wearing face masks were axed on July 19 but were reintroduced last month tackle the Omicron surge.

However the rules are more relaxed and there are more places where face masks need not be worn.

The hospitality sector is exempt from the changes, so these rules won't apply in restaurants, cafes, bars or pubs.

Face masks are also exempt if you are exercising or singing.

Refusing to wear a face mask in areas where they have been outlined as mandatory could land people with a £200 fine.

PCR tests binned for travellers arriving in the UK

PCR tests or people arriving in the UK were axed last week.

The Government had imposed tougher testing requirements on travellers when Omicron emerged in November.

The pricier 'day two' PCR tests after arrival in the UK have been replaced with cheaper lateral flow test.

While the requirement to self isolate until a result has been received has also been scrapped.