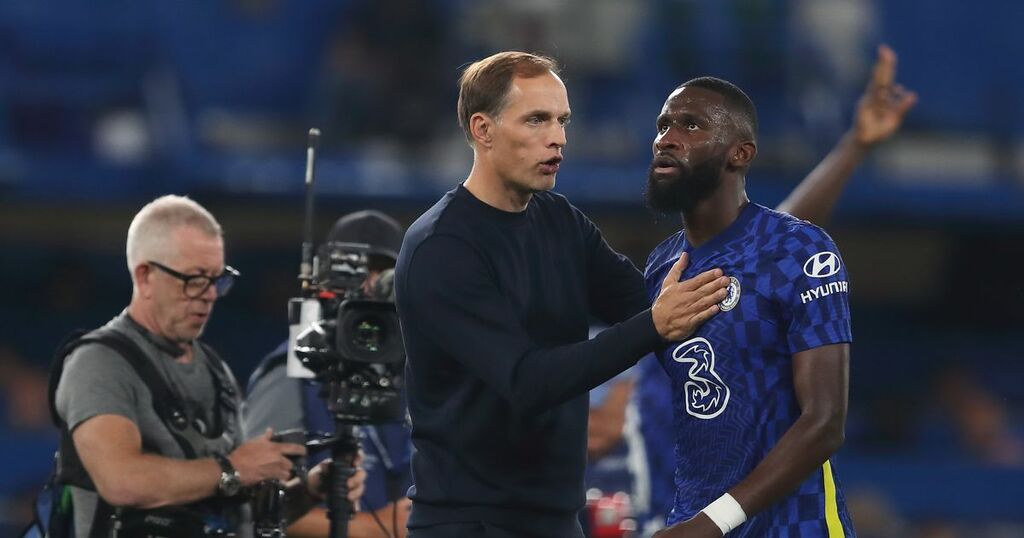 Lethargic Chelsea but grinding out wins

The first half of the contest saw the Blues really struggle to get anything going whatsoever. They looked the most ponderous they have been since Tuchel’s very first match in charge, the 0-0 draw against Wolves back in January, and there are clearly mitigating circumstances there.

There wasn’t the usual zip and spark from the Blues side. Everything was a bit slow, cumbersome and it allowed Zenit to get ten men behind the ball and deal with pretty much anything Chelsea threw at them.

Mason Mount had an uncharacteristically poor opening 45 minutes, completing only 78% of his passes as he also struggled to get the home side on the front foot. Reece James’ set piece delivery was off as well when Chelsea did force dead ball dead ball situations.

Zenit keeper Stanislav Kritsyuk had no saves to make in the first half which summed up the opening stanza from the reigning European champions.

The second half started in a similar vein, Cesar Azpilicueta misplacing a very simple pass to James that went straight out for a goal kick.

While Chelsea were not at their best for sure, it is only fair to give credit to Zenit for how they defended. They doubled up on Lukaku to nullify Chelsea’s in-form frontman, had midfielder Wendel sitting right in front of their back four to effectively make it a five.

Antonio Rudiger tried his best to spark Chelsea into life with a mazy run that went full of 60-yards before curling a striker narrowly wide.

Tuchel summoned Kai Havertz, Timo Werner and Callum Hudson-Odoi to warm up seven minutes after half time, perhaps as a threat to those on the pitch already b ut Havertz was introduced on 62 minutes.

When you’re not playing well, your big guns need to help bail you out. Spurs needed Harry Kane to do that for them against Crystal Palace but he couldn’t, whereas Romelu Lukaku can.

The Belgian was having a frustrating game as the service into him was nullified well by Zenit and the striker was often facing two centre backs at any given time. But his header to give Chelsea the lead with 20 minutes to go was textbook.

Azpilicueta’s cross was sublime to the far post. Lukaku, for perhaps the first time in the game, had some space but he climbed high, arrowed his header into the corner low and hard where Kritsyuk couldn’t get near it and into the back of the net.

Tuchel said post-match of the performance: I am happy in general with the performance. It was a tough match against a strong opponent. It was tough for us in the first half to find little gaps, accelerate the game, be dangerous and create touches in the box ball.

"We played with a high intensity and had many ball recoveries. We had to be focused and aware with our defence because they have a lot of individual quality upfront.

"We did all that and in second half we found it easier to find spaces in between the lines, to accelerate, create half-chances, deliveries. And the cross from Azpi was good and dangerous because it comes from a difficult place to defend around the box. The target was the second post and Kai [Havertz] and Romelu were there. It was nice and at the same time a decisive goal that was very good for us.”

Tuchel showed plenty of frustration on the touchline throughout the 90 minutes but he’ll be thrilled to see how Chelsea side barely get up to third gear yet still manage to seal an important win.

Romelu Lukaku already showing his value - as if you needed reminding

When you have a striker that can score and get you out of a sticky situation when you’re not playing well, they are like gold dust.

Chelsea splashed £97.5million to sign Romelu Lukaku from Inter Milan and it has taken only four games to showcase exactly why.

The Belgian has four goals in four games since making his return to Stamford Bridge and seven goals in six matches for club and country this season.

It has been said many times that Lukaku was the missing piece for Chelsea that they needed to sign. Roman Abramovich got his chequebook out and made it happen, Chelsea made some player sales as well to cover the cost, and it has paid off in a big way already.

The Blues were not at their best on Tuesday night. Far from it in fact. But it is absolutely undeniable that if you can get the right service into an elite frontman, he will gobble up the chances.

Azpilicueta cross was the very definition of “on a plate” for someone like Lukaku and he duly did the business, planting a header low and in a spot where Zenit keeper Stanislav Kritsyuk couldn’t get near.

It had been a frustrating night for Lukaku. Some of that was down to Zenit denying pretty much any service into him with their solid banks of four. Yaroslav Rakits'kyy and Dmitri Chistyakov doubled up on Lukaku all game to nullify his threat.

But if you get Lukaku the ball in the right areas at the right time then, in his current form and what he has shown over the last two and a bit seasons, he’s lethal.

Chelsea needed their big gun to come up big when they needed him most as the game was somewhat meandering along. Lukaku changed all that in an instant.

Tuchel said to BT Sport on Lukaku after full-time as the Belgian proved the difference: “It was an excellent header, a well-timed cross by Azpi from a good space.

“Like in the last game, that is why he is here. He likes to score and again he was decisive for us.”

Lukaku was awarded the man of the match award by UEFA for his performance, Antonio Rudiger was probably a fair shout as well. But the signs for Lukaku are already so, so encouraging. And for the opposition? Ominous.

Chelsea’s German centre half is out of contract at the end of the season and he is able to talk to clubs in Europe from January onwards as his deal in west London winds down.

You suspect however that the Blues will fight tooth and nail to keep Rudiger at the club after his rejuvenation since Thomas Tuchel arrived at the club.

Rudiger was on the verge of being completely frozen out of the club under Frank Lampard but when Tuchel arrived, he needed experienced heads to help guide him through the early stages of his Chelsea reign.

Rudiger has gone from strength to strength under Tuchel and is now one of his undroppables for almost every game. If Rudiger is fit then he plays, it’s as simple as that.

There are rumours that Rudiger will likely test the water in January and see what is out there for him in terms of perhaps one final bumper pay day. The centre back will be 29 in March next year so still has a bit of time on his side but can still command a decent pay packet if he were to go anywhere this summer.

A return to Germany with Bayern Munich and teaming up with David Alaba at Real Madrid are reportedly options that Rudiger is considering and Chelsea might have to make him an offer he can’t refuse to keep him in the capital. That said, winning a trophy of some sort this season might do the trick as well.

After full time as Rudiger emerged from the tunnel to undertake some press interviews, a fan who had remained behind a little bit longer took the opportunity to tell Rudiger exactly what he needs to do.

“Sign the contract, Rudi!” exclaimed the fan as Rudiger was walking away. The shout was acknowledged by Rudiger, who looked up to see where it came from but he gave nothing away in terms of a response.

The centre back is very much in favour with the Blues fans at the moment and also with Tuchel. Chelsea will do well to get him tied down to a new deal along with Andreas Christensen as the duo are currently one of the most formidable centre half duos out there.

Chelsea's captain has supplied two assists in his last two games that have helped get Chelsea over the line in both matches.

Both times as well, the Spanish veteran has found Lukaku to score both goals that have secured two wins for Tuchel's team.

Against Aston Villa, "Dave" found Lukaku with a clever pass across the box but Lukaku still had an awful lot of work to do, digging the ball out from under his feet before lashing home from 18-yards to score Chelsea's third and see off a spirited Villa.

Then in midweek, Azpilicueta made Lukaku's life a little bit easier though the striker still had some work to do. The right centre-back swung an inch-perfect cross to the far post, where Lukaku rose highest to plant his powerful header home past Kritsyuk in front of a jubilant Matthew Harding stand.

Like Rudiger, Azpilicueta is also out of contract at the end of the campaign. While Rudiger has a bit of time on his side, Azpilicueta turned 32 in August and does not.

He said of the possibility of signing a new deal ahead of Zenit: "I don’t have any concerns.

"I feel fully trusted by the club in this moment. It is true that my contract ends in June but I am just focused on what is next, to train and play the best I can.

If he does end his career at Chelsea, which surely he should get the chance to do so having collected two Premier League titles, a Champions League, two Europa League’s, an FA Cup, League Cup and UEFA Super Cup in his glittering career in west London, it is well-deserved.

He continues to have an impact on both ends of the pitch. On that, by the way, Chelsea have kept 23 clean sheets in 36 games in all competitions under Tuchel and Azpilicueta has been at the heart of it.