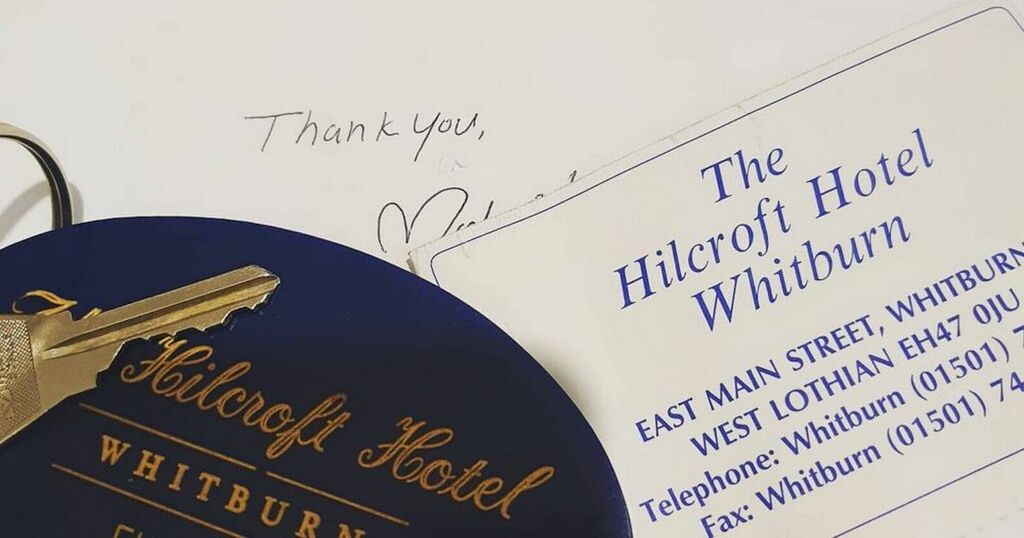 A West Lothian hotel has had an old room key returned back to them – 20 years after the guest last visited in 2001.

The Hilcroft Hotel in Whitburn, West Lothian, received the key alongside a handwritten note from a former visitor who lives in Florida in the States on Friday.

The forgetful guest took the manual room key, which is no longer in use, back home with them by accident in February 2001.

After stumbling across it this month, they decided to send it over 4,000 miles back to the Scots hotel who now use electronic fobs.

The former guest wrote: “The last time I stayed at your hotel I forgot to give my room key to reception at checkout.

“Sorry for the delay in returning it.

The note included the room key attached to an old Hilcroft Hotel keyring.

The Hilcroft Hotel said the American guest also included their old guest wallet which noted the time and length of their stay.

Speaking today, general manager of the hotel, Andrea Peaton, 40, said: “When the mail came I noticed an American airmail and opened it straight away.

“We couldn’t believe it at all, it was quite heartwarming that someone would go to the trouble to airmail it after all that time.

“We’re going to send him a little thank you letter.

“It’s got to be the longest key return, it beats any records that I know of.

“It’s in such good condition, it’s like I just gave it to him yesterday.

“I’m not certain but I think he might have gone into an old suitcase that hasn’t been used in a long time and that he’s found it in there.

“We’ve installed an electronic key system now so we don’t use these old ones anymore.

“Some staff think we should mount it in a frame.”

The Scots hotel posted about the incident on Facebook on Saturday, writing: “Thank you to our previous guest who kindly sent back his key all the way from Florida USA after accidentally taking it home in February 2001.

The post has now collected over 100 likes from users who were mixed in their responses to the bizarre return.

Lisa Miller joked: “Must have been returned via Hermes.”