The Trinamool Congress government is feeling the heat of the alleged irregularities in recruitment carried by the West Bengal School Service Commission (WBSSC) with senior Minister Partha Chatterjee on Wednesday appearing before the Central Bureau of Investigation (CBI).

Earlier in the day, Justice Abhijit Gangopadhyay of Calcutta High Court directed Mr. Chatterjee, Minister of Industries and Commerce and secretary-general of the State’s ruling party, to appear before the central agency by 6 p.m. Mr. Chatterjee appeared at the Nizam Palace office of the CBI by about 5.40 p.m.

The directive to the Minister to appear before the agency came after a division Bench of the Calcutta High Court on Wednesday upheld orders of a single Bench that directed CBI to inquire into the alleged illegal appointments given by the WBSSC. Earlier in April, the Minister was asked to appear before the agency by Justice Gangopadhyay in connection with allegations of irregularities in recruitment of Group-D staff, and a division Bench had stayed his appearance by five weeks. During the day, the Minister approached a higher Bench but was not granted any reprieve by the High Court.

On Wednesday, the division Bench of Justice Subrata Talukdar and Justice Anand Kumar Mukherjee described the irregularities in appointments of teaching and non-teaching staff by WBSSC as a “public scam” and added that the single Bench of Justice Gangopadhyay was not wrong in ordering a probe into the alleged money trail involved. Partha Chatterjee was the State Education Minister when the alleged appointments were made.

Justice Gangopadhyay had also held that a five-member committee appointed by the Minister to oversee the appointment process for recruitment of teachers for classes 9 and 10, and group-C and D staff in government-aided schools was illegal. On Wednesday, two members of the advisory committee also appeared before the CBI.

On Tuesday, the Bench of Justice Gangopadhyay directed the CBI to interrogate West Bengal Minister of State for Education, Paresh Chandra Adhikari over the appointment of his daughter as a teacher in a State-run school. Justice Abhijit Gangopadhyay directed that the Minister should appear before the CBI authorities by Tuesday evening for interrogation over the allegations. While Mr. Adhikari had left Cooch Behar in north Bengal to come to Kolkata, he did not appear before the agency on Wednesday. His whereabouts were not known till the evening.

Paresh Chandra Adhikari was associated with All India Forward Bloc and was the Food Minister in the Left Front government before he joined the Trinamool Congress in 2018. The appointment of Mr. Adhikari’s daughter as a teacher in the State-run school came months after the Minister joined the State’s ruling party.

Justice Gangopadhyay in his order had suggested that State’s Chief Minister and Governor should think the matter over whether Mr. Adhikari should resign from the Council of Ministers. A report by [retd.] Justice R.K. Bag to the Calcutta High Court a few days ago had pointed out irregularities in the recruitment of Group-C staff by WBSSC.

A number of recent developments at Calcutta High Court have blown off the lid over the alleged irregularities in recruitment carried by the WBSSC. On Wednesday, there were protests in the city by the Opposition political parties. The supporters of the Akhil Bharatiya Vidyarthi Parishad (ABVP) tried to force their way past the security cordon near Bikash Bhavan, the headquarters of State Education Department protesting against irregularities in recruitment by WBSSC. The police had to use water cannons and non-lethal force to disperse the crowd.

Activists of the Students’ Federation of India (SFI) also held protests on the issue and were taken in custody. Leaders from the Communist Party of India(Marxist) and the Bharatiya Janata Party (BJP) demanded resignation of Partha Chatterjee and Paresh Chandra Adhikari. A section of students who participated in the recruitment process by WBSSC but could not get jobs welcomed the order by the High Court. 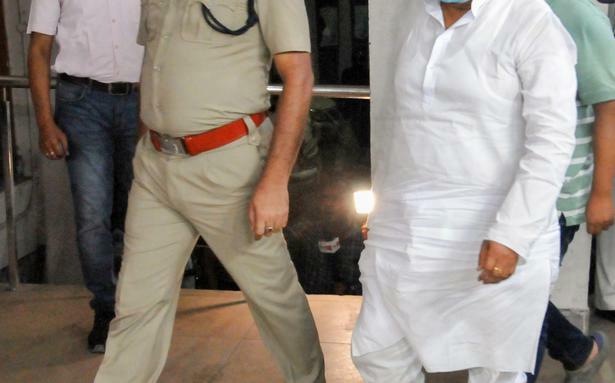 The division Bench refused to hear the plea, saying that since the appeal has not been affirmed or filed in…