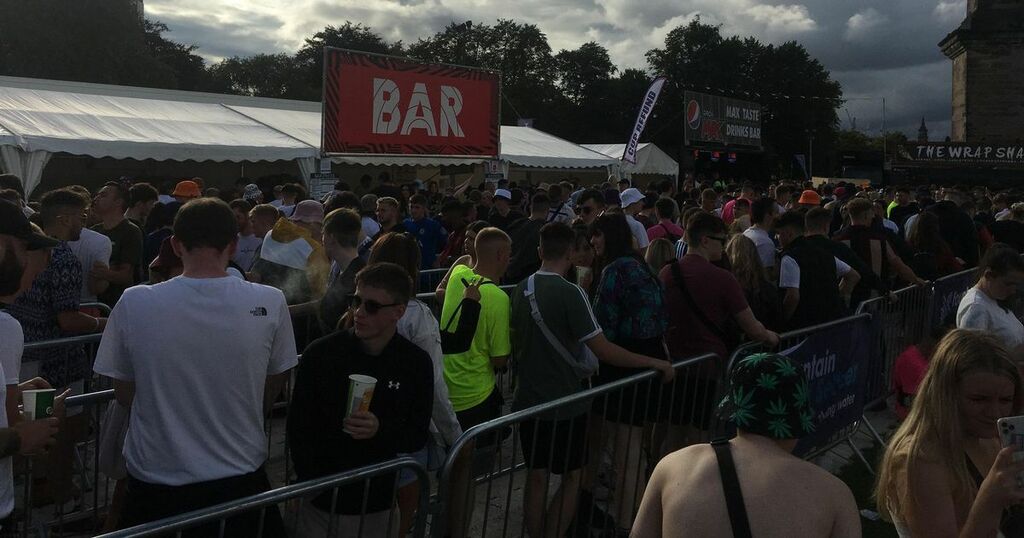 Hundreds of revellers have been queuing up for pricey drinks at TRNSMT this evening.

We told how punters faced forking out £6 for a pint of beer, while a single vodka and mixer was coming in at £6.50 during the three-day festival this weekend.

But that hasn't put folk off - as floods of thirsty Scots have been keeping the bar staff busy throughout the opening day.

There's plenty of bars dotted about the arena - but each have looked as popular as the next at times with queues backed up, looping around the metal gates.

Thankfully for the parched partiers they've been moving fast - but once they do get served, some were in for a shock.

Drinks on offer include beer, cider, hard seltzer, wine, spirits and a selection of soft drinks.

Carlsberg is being picked up for £6 per pint, while Somersby Cider is snapped up for £6.50.

The festival has kicked off with a bang as revellers have flooded into the gates of Glasgow Green for the first time in over two years.

The cloudy skies and occasional showers didn't dampen the spirits as they passed by the flag sellers in Glasgow's High Street and dressed in a colourful combo of neon tie dyed and denim shorts, T-shirts, bucket hats and cross body bags.

The sniffers dogs have been out to catch any contraband at the entrance and anti bac was on hand before exploring the grounds, the food stalls and of what was for many will be their first music event since lockdown - or for some members of the young crowd, ever.

Everyone has been in great spirits singing and dancing the day away - and by the time AJ Tracey took to the main stage at 3.55pm, the sun had even come out.