At least 15 people — 14 of them children — are dead following a mass elementary school shooting in Uvalde, Texas.

On Tuesday, an 18-year-old gunman opened fire at Robb Elementary School in the early afternoon, killing at least 14 children and one teacher before being killed by police, according to Texas governor Greg Abbott. It is the deadliest school shooting in modern Texas history, USA TODAY reported.

Ahead of the Golden State Warriors’ Game 4 Conference Final matchup against the Dallas Mavericks on Tuesday night, head coach Steve Kerr made a passionate, furious speech condemning the shooting. Kerr urged Mitch McConnell, among other senators, to step up and do something proactive.

“I’m not going to talk about basketball. Nothing’s happened with our team in the last six hours. We’re going to start the same way tonight. Any basketball questions don’t matter.

“Since we left, shootaround, 14 children were killed 400 miles from here, and a teacher. In the last 10 days, we’ve had elderly black people killed in a supermarket in Buffalo. We’ve had Asian churchgoers killed in Southern California. Now, we have children murdered at school.

“When are we going to something? I’m tired, I’m so tired of getting up here and offering condolences to the devastated families that are out there. I’m tired of the moments of silence. Enough.

“There’s 50 senators, right now, who refuse to vote on HR-8, which is a background check rule that the House passed a couple years ago. It’s been sitting there for two years. There’s a reason they won’t vote on it: to hold onto power.

“I ask you, Mitch McConnell, and ask all of you Senators who refuse to do anything about the violence, the school shootings, the supermarket shootings, I ask you: ‘are you going to put your own desire for power ahead of the lives of our children, our elderly, and our churchgoers?’ Because that’s what it looks like. That’s what we do every week. I’m fed up, I’ve had enough.

“We’re going to play the game tonight, but I want every person here, every person listening to this to think about your own child or grandchild, mother or father, sister or brother. How would you feel if this happened to you today? We can’t get numb to this. We can’t sit here and just read about it and go well, let’s have a moment of silence. Yay, go Dubs. Come on Mavs, let’s go. That’s whate we’re going to do. We’re going to go play a basketball game.

“Fifty Senators in Washington are going to hold us hostage. Do you realize 90 percent of Americans, regardless of political party, want universal background checks? We’re being held hostage by 50 senators in Washington who refuse to even put it to a vote, despite what we, the American people, want. They won’t vote on it, because they want to hold onto their own power. It’s pathetic. I’ve had enough.”

Warriors star Stephen Curry also chimed in with his thoughts on Kerr’s speech before tip off on Tuesday.

🙌🏽 watch this as much as you watch the game tonight…. https://t.co/EErBoMgCtQ

This is not the first time Kerr has spoken up on important societal issues, as he talked at length about the 2021 supermarket shooting in Boulder, Colorado that left 10 dead and called out former vice president Mike Pence for decrying the protests following the murder of George Floyd in 2020. 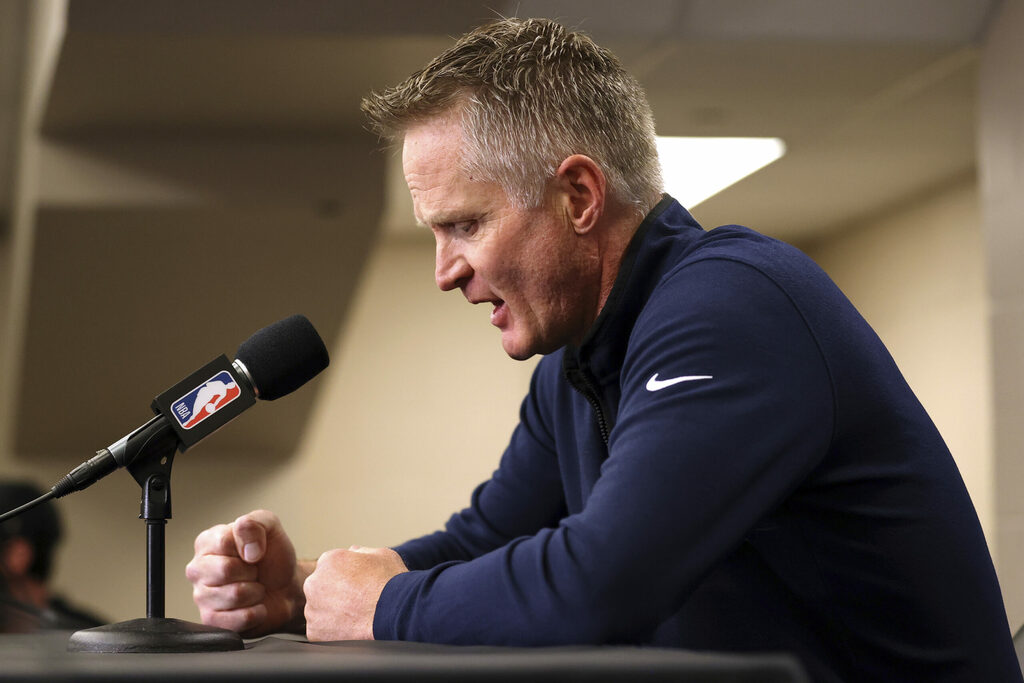 Steve Kerr, head coach of the Golden State Warriors and one of the most prominent figures in the NBA, used…