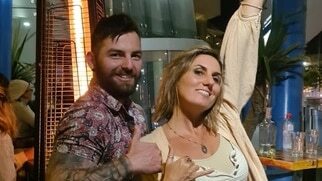 A man who rescued a woman after she collapsed in rising tidal water has been recognised for his bravery.

Sam Redfern was on a fishing trip at Cape Keraudren in WA's Pilbara region in October 2020 when he saw Tania Casotti on a rock shelf about 500 metres off shore.

He said she was face down in the water.

"I decided to pick her up and start carrying her back across the rock shelf," Mr Redfern said.

"It took me about an hour-and-a-half to get back to the shoreline."

Ms Casotti was taken to hospital where it was discovered she had suffered a brain aneurysm and needed surgery.

Mr Redfern, who hails from Coonabarabran in New South Wales, had not met Ms Casotti before that fateful day.

"All that was going through my mind at the time was that I wanted to get home to my family in NSW and I didn't want someone else's family to lose their loved one," he said.

Mr Redfern has been awarded a Gold Cross at the Royal Life Saving WA Bravery Awards.

He could not attend the ceremony because of border restrictions, so Ms Casotti accepted it on his behalf.

"If Sam wasn't there, there's no way I would have survived," she said.

Mr Redfern said he was shocked to find out he was being honoured.