WA industries are big polluters, and Labor's 2030 emissions target could hit them hard

Western Australia is known as the engine room of the national economy, but with the change of government it will have to do a lot of heavy lifting when it comes to the so-called green transformation.

The state is home to about one-third of the country's biggest greenhouse gas emitters, which collectively produce about as much carbon dioxide as Sweden.

While protests about climate change have been getting louder, emissions from this growing group, which includes oil and gas producers, alumina refineries and iron ore mines, have been quietly going up, not down.

It is not that no-one has been watching.

These facilities, along with another 150 of the country's biggest emitters, have been monitored by the federal government under what is called the safeguard mechanism, a scheme set up by the coalition in 2016 for facilities emitting more than 100,000 tonnes of CO2 equivalent or C02e, which is a standard unit for measuring carbon footprints.

Under the scheme, big emitters have to keep their emissions under a baseline or limit, but if they expect to breach that limit, they can apply for a new baseline or what is called "a multi-year monitoring period" to allow more time to comply.

The new Labor government has pledged to "strengthen" the scheme, which will not be hard according to critics who say since it has been operating, companies have been given far too much "wriggle room".

The figures tell the story.

In 2016-17 when the scheme started, 62 WA facilities fell under the mechanism, collectively emitting 41.8 million tonnes of CO2e.

To put that in perspective, that is about half of WA's total annual carbon footprint of 91.9 million tonnes, according to the latest figures.

A recent analysis by RepuTex Energy found that nationally, emissions covered by the safeguard mechanism had grown 7 per cent since 2016.

Climate Council CEO Amanda McKenzie is scathing of the scheme. She said companies had effectively been allowed to set their own speed limits and then exceed them.

"The whole idea of any policy on climate change is that it should be there to reduce emissions.

"And unfortunately across that area of the economy where it's supposed to cover, there hasn't been any substantive reduction in emissions."

Although yet to be detailed, Labor's plan would retain the safeguard mechanism but set steeper cuts for companies to meet, as part of its ambition to reduce emissions by 43 per cent of 2005 levels by 2030.

According to modelling carried out before the election, 5 million tonnes of emissions would have to be shaved off the industrial sector each year for Australia to meet net zero by 2050.

The Carbon Market Institute, which represents everyone from the major emitters to carbon offset providers, has welcomed Labor's plan.

However, CEO John Connor said it was not true to say the safeguard mechanism had been ineffective.

Mr Connor said 14 companies across the country that breached their emission baselines had been forced to purchase carbon offsets worth about $15 million last financial year.

But he acknowledged the industrial sector needed a stronger and clearer investment signal from government.

"The safeguard mechanism under the [former] Coalition government has been a weak safety net," he said.

"What we want that to be is the primary signal for companies that they need to decarbonise and get on with the job in a cleaner economy, while we also help the global effort to limit dangerous global warming."

That is where Woodside chief executive Meg O'Neill believes the incoming government needs to strike a balance between bringing down local emissions and supplying what she says is a vital "transition fuel" to overseas countries.

"As Australia thinks about its decarbonisation pathway, I think it's important to differentiate what can be done to decarbonise within Australia from the role that Australian energy can play in helping nations such Japan, Korea and China in their own decarbonisation journeys," Ms O'Neill told ABC Business.

"And it would be a shame if we were to conflate the two and run the risk of causing additional economic or climate harm to those nations that wouldn't have access to Australian gas."

The company's Northwest Shelf gas project in the Pilbara is at the top of the table of WA emitters and its new Scarborough development is expected to produce 89 million tonnes of "scope one" (local) emissions over its lifetime.

Woodside says it is committed to its target of reducing its scope one and two emissions by 30 per cent by 2030.

Ms O'Neill said she would welcome any climate policy by the incoming government that offered stability to the sector.

"There has been tremendous uncertainty about where we were headed as a nation," she said.

"One of the things that is important for us is that we make investments that will endure for 20 or 30 years' time.

"We actually are holding ourselves to account for declining emissions. So if the safeguard mechanism was to change to be aligned to that, that really wouldn't be that big a deal for us.

"I think one thing that is helpful about the safeguard mechanism is that it applies the same methodology to all industrial proponents in Australia, and so if there were changes to be made to reduce the baseline, that would actually keep the playing field level for all of the players."

The company expects to start producing LNG from Scarborough in 2026.

The Conservation Council of WA, which has been campaigning against the Scarborough development, welcomes Labor's commitment to beef up the safeguard mechanism and its target to reduce emissions by 43 per cent by 2030.

But executive director Maggie Wood wonders how it is going to happen.

"How will Australia meet that 43 per cent reduction when we're ramping up large fossil fuel projects like Woodside's Scarborough project and the Barossa in the Northern Territory?" Ms Wood said.

"Our big question is when will the large emitters in Australia do their bit?

Ms Wood said the new safeguard mechanism needed to include strong penalties for the big polluters.

"What we would really like to see is stronger action, stronger enforceable action when companies don't meet their targets," she said.

"We'd be really interested in mechanisms that required companies to stop production if they show that they can't seriously abate the carbon that is required."

South32, which owns the Worsley Alumina refinery, said in a statement it was investing in greenhouse gas emission reduction projects to achieve its goal of net zero by 2050.

"We have set a medium-term target to halve our operational greenhouse gas emissions — scope 1 and 2 — by 2035," the statement said.

"We are also studying options to transition our primary energy supply to lower-carbon alternatives, including conversion of our steam boilers from energy coal to natural gas as an interim step as we look to long-term renewable energy alternatives such as hydrogen or electrification."

"Already Alcoa is the lowest CO2e intensity alumina refiner globally, with emissions from our WA refineries at about half the industry average," the company's statement said.

"We have a technology road map of future-oriented research and development projects, with the goal to reduce our footprint even further."

Representing the oil and gas industry, the Australian Petroleum Production and Exploration Association (APPEA) said the industry had spent more than $5 billion on investments to reduce emissions in recent years.

"Our members are also diversified energy producers, including some of the biggest renewable power producers in the world, and we've already dramatically reduced emissions by replacing coal," the statement said.

Of the six companies that run WA's top-10 emitting facilities, only Woodside agreed to be interviewed for this story. 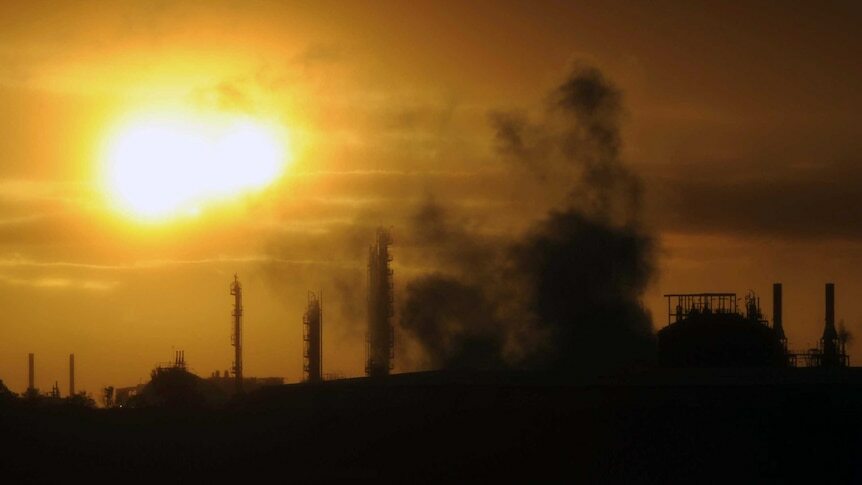 ABC News
One subscription that gives you access to news from hundreds of sites
If Labor won’t shut offshore gas down, it must tax it — and heavily

The party promised stronger action on climate change, so allowing the offshore gas industry to continue on its merry way…