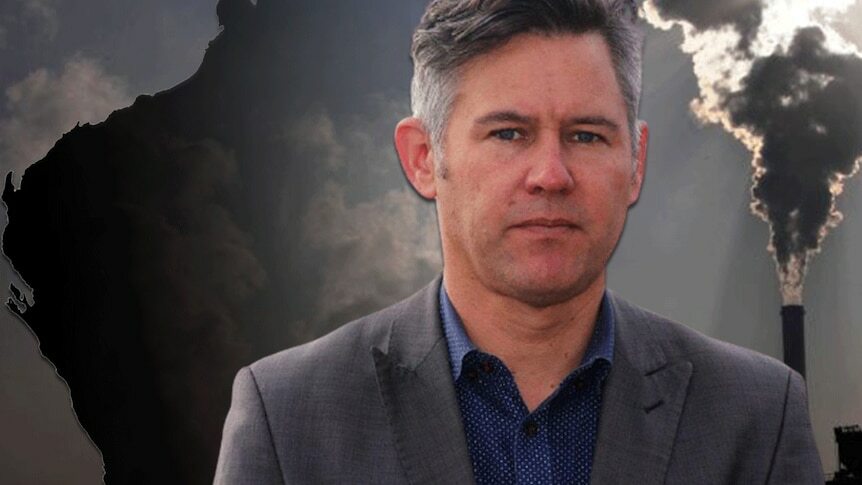 Western Australia is known for its pristine beaches and endless sunshine.

But WA has a less desirable claim to fame, as one of only two Australian states and territories where greenhouse gas emissions are higher than they were in 2005.

WA Greens MP Brad Pettitt will today introduce a bill into state parliament in a bid to legislate a reduction in emissions and harness what he describes as a global "climate moment".

The Climate Change and Greenhouse Gas Emissions Reduction Bill seeks to reduce WA's net greenhouse gas emissions by at least 50 per cent of 2005 levels by mid-2030.

The ultimate goal is to achieve net zero emissions by 2050.

"All the evidence [suggests] if you want to [take] action that meets the science and gets us on a quick transition to net zero, you need to have targets for this decade and that's at the heart of this bill," Mr Pettitt said.

With WA's 2019 emissions increasing by 20.8 per cent compared to 2005 levels, achieving those targets will require significant support from the mining industry.

The Minerals Research Institute of Western Australia (MRIWA) says miners are already at the table, with more than 100 industry representatives attending an inaugural net zero emission conference this week.

"When we started having this conversation about 12 months ago, there were a few niche projects ... but the escalation and amplification of the work that has been happening is significant," said MRIWA CEO Nicole Roocke.

"There are some companies who have been on this journey for a number of years; others are yet to start.

WA at risk of being 'left behind': Greens MP

Australia's approach to climate action is under global scrutiny ahead of this month's COP26 climate summit in Glasgow.

While the federal Coalition is still negotiating a climate policy to take to the summit, Treasurer Josh Frydenberg has publicly backed a 2050 goal for net zero emissions, while Prime Minister Scott Morrison said he wants the same thing "preferably" by 2050.

At a state level, South Australia and Victoria have legislated targets, while Tasmania this week announced its intention to legislate an ambitious goal of net zero emissions from 2030.

Meanwhile, Queensland's parliament voted to officially endorse a target of net zero by 2050 and New South Wales recently committed to halving greenhouse gas pollution by 2030, although those goals are not enshrined in law.

The WA Government has committed to net zero emissions by 2050, releasing a climate policy in 2020 that sets out strategies to achieve it.

Mr Pettitt said the state should now legislate that target or risk being left behind.

"We're kind of the laggard state in the recalcitrant country and that really needs to change," he said.

"This is a huge opportunity for Western Australia [but] not having targets [and] not getting on the front foot when it gets to climate means the investment will pass us by."

Mr Pettitt's bill also sets a target for boosting the state's renewable energy production from its current rate of 24 per cent to 90 per cent by 2030.

"WA is so well placed; we've got the best sun and wind resources in the world, we've got plentiful land and we've got smart people who are capable of doing these jobs," he said.

"What we're missing is the political leadership and those clear targets that can give the private sector certainty and give investors certainty so jobs can follow."

Mr Pettitt conceded his bill had little chance of being passed in its current form but said he hoped it would pressure the state government to legally formalise its own commitment to net zero emissions by 2050.

Amber-Jade Sanderson, the WA Minister for Environment, Climate Action and Commerce, said Labor would not support the bill.

"The government is considering legislation around targets and climate action ... but legislation can be a really blunt and inflexible instrument," she said.

"There are mechanisms in place that we're examining that have more flexibility but are enforceable."

Ms Sanderson says the government will consult with industry and set interim targets after the COP26 meeting in Glasgow.

"It would be pre-emptive to be announcing targets prior to what is possibly one of the most important international meetings that we have seen in the last decade on this issue," she said.

"We're very focused on working with industry [and] working with the communities that will be affected on how we transition WA into a sustainable resource state."

'Opting out is simply not an option'

Nationals WA leader Mia Davies was waiting to see details of the bill but told the ABC her party wanted to be part of the discussion.

"We support sensible transitions and using an energy mix that allows us to lower our emissions in Western Australia," she said.

"Opting out is simply not an option."

The WA Nationals passed a motion at the party's state conference on the weekend supporting a net zero emissions target by 2050.

The pressure is also coming from the next generation of leaders, with students walking out of classrooms earlier this year to demand climate action.