Vivianne Miedema said it would “mean more” to win titles at Arsenal than elsewhere next season after signing a new contract with the club to put an end to speculation surrounding her future.

Miedema, the top goalscorer in the history of the Women’s Super League, had been linked with a move to European champions Barcelona throughout the season.

The Netherlands international was set to become a free agent in the summer but has agreed to remain with the Gunners on the condition of the club matching her ambition to win trophies and compete at the highest level of the women’s game.

Arsenal were beaten to the WSL title by Chelsea this season on the final day of the campaign and lost to Emma Hayes’ side in the last season’s delayed FA Cup final at Wembley in December.

“I think the most beautiful thing about the game is building something with a team and with people around you that you really want to be around,” said Miedema, who scored 23 goals in 39 appearances this season.

“I do feel like I have got that at Arsenal. I feel like for me, winning titles with Arsenal will mean a lot more to me than winning them with another club at the moment. And that’s what I obviously hope to achieve with Arsenal.”

Arsenal have not lifted silverware since they last won the WSL title in 2019, with Emma Hayes’ Chelsea side sweeping up seven of the last nine domestic honours.

Under Jonas Eidevall, Arsenal took four points against Chelsea last season but a shock defeat to Birmingham proved crucial. The Gunners were also elimated from the Women’s Champions League at the quarter-final stage after a 3-1 aggregate defeat to Wolfsburg.

“Viv is a stellar talent and a hugely important player for this team, so it’s fantastic news that she is staying with us,” Eidevall said. “As a club, our ambition is to win titles and compete at the highest level – we know Viv’s own ambitions are the same, and together we will give everything to achieve that.” 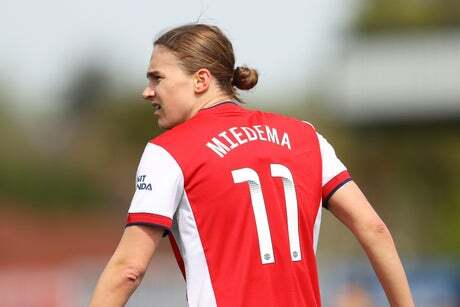