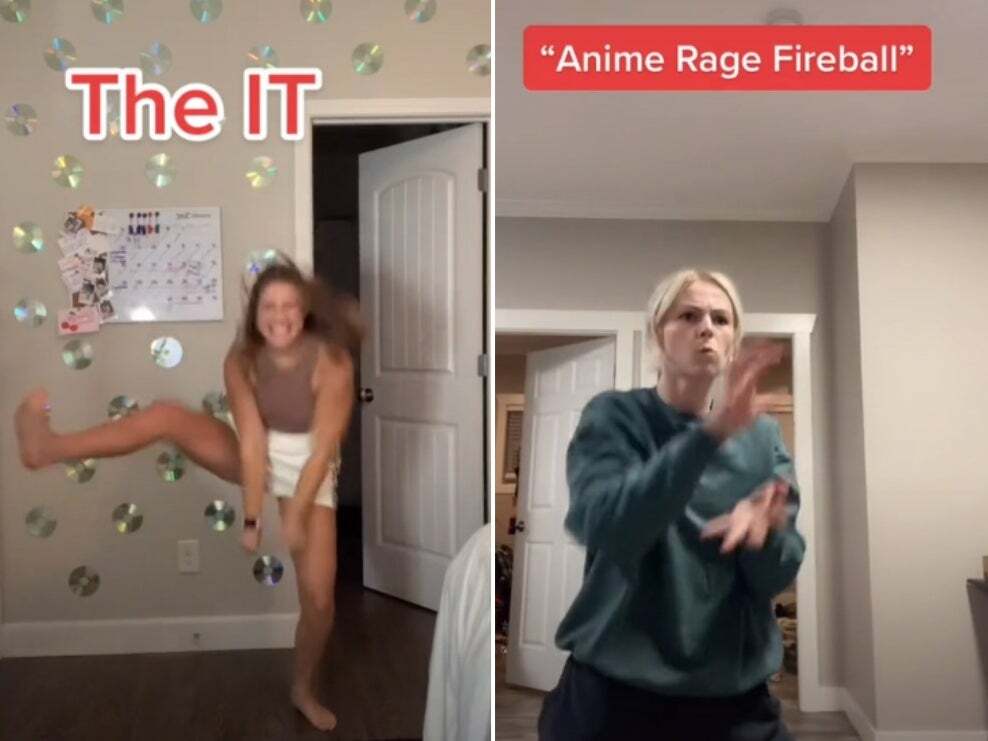 Since the easing of lockdown, we’ve all been allowed back on the dance floor at nightclubs across the country.

But, after 18 months of being banned from public dancing, some may have found it tough.

Perhaps someone is just standing too close for comfort. Or maybe you’re being hit on by a guy or girl you’re not interested in?

Either way, these two TikTokers have shared the perfect dance moves which will allow you to reclaim your (socially distanced) space, whatever the venue.

Gabby DiPietro (@gibz_) kicked it all off with two TikTok videos which she described as: “Dance moves that will keep the boys away from you in the club”. She then showed off some hilarious dance moves as Believe Me by Navos played in the background.

Her first move was “the shin/crotch kick” where she holds her hands together and moves them up and down to the beat, kicking anyone in her path.

The second move was the “finger thrust” where Gabby squats and thrusts as she puts her middle finger up to those up in her business. “The classic clench” saw the TikToker stand with her back to the camera in the corner as she repeatedly clenches her butt cheeks.

It seems as though as lot of people were looking for some off-putting moves as the TikTok went viral with a staggering 40m views.

Though, if those moves weren’t enough, Gabby had more to offer in a follow-up video.

She started off strong, in a move she dubbed “The IT” – a nod to the famous (and horrifically scary) clown Pennywise from Stephen King book series and film IT. Gabby can be seen hopping from one foot to the other and lifting her arms up and down each time as she grins manically.

Next was the “I can’t hear” you move where the TikToker nodded to the rhythm of the music as she put her hand to her ear and pretended to listen to whoever was bothering her before flipping them off – a move she repeated over and over.

Finally, if all else fails, dancing away from the situation could be an option thanks to Gabby’s “tap-dancing my way out of your view” moves.

This video has also gone viral with over 16m views, and nearly 3m likes.

On her self-proclaimed “spam” account (@kallmewhateveryouwant), Kris showed off some of her funny original dance moves that would definitely put off “creepy dudes on the dance floor.”

First up, Kris demonstrated the “Flip off fan” where she robotically rotates her arm in order to flip off those who have annoyed her. She then takes inspiration from the Anime genre as she does a move called “Anime Rage Fireball” (where she pretends she’s holding a big fireball and shoves it in people’s faces).

Kris is also inspired by the Mario Kart characters with her “Princess Peach to Bowser” dance, as she pretends to be graceful like Princess Peach before transforming into the towering turtle Bowser by making herself look intimidating and showing off her teeth.

A famous character from Lord of the Rings also gets a shoutout too with Kris “The Gollum” move as she puts her sweatshirt on the back of her head and pretends to play the fictional monstrous character.

If after all that the person is still getting on your last nerve, then there’s always “The Standoff” – which saw Kris dressed in a cowboy hat, moustache, sunglass and holding a huge STOP sign.

Similar to Gabby, Kris’ outlandish dances have been a hit with people as her video has 19m views.

Thousands of people have also left comments on both of the TikTokers’ videos, thanking them for the advice and vowing to break out those moves if someone invades their personal space.

So if you see someone channelling Pennywise or Bowser on the dance floor, then you know where they got their dancing from...