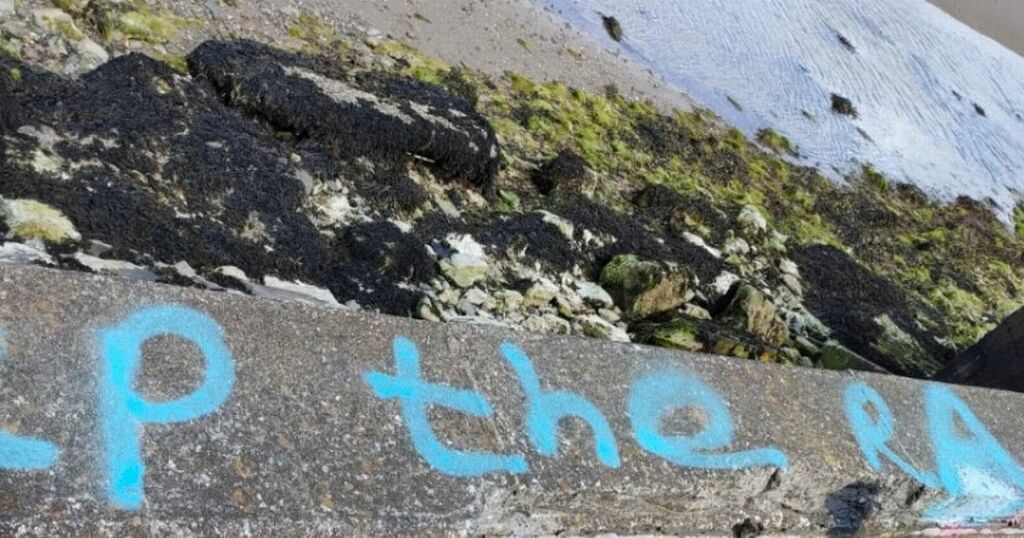 His beloved villa has been daubed in graffiti by protesters, and a museum dedicated to his father ransacked. Now former…

Reuters
Gabriel will be blind by the time he's 40. But his vision for his community is 'crystal clear'

Gabriel will be blind by the time he's 40 — but his vision for his community is "crystal clear".

ABC News
One subscription that gives you access to news from hundreds of sites
Five key things we learnt from Wirral’s 13,000 homes plan

Swastikas have been daubed over a Scots town leaving the local community in disgust.

In images obtained by the Record, a solicitor's office on Riverside Road in the town could be seen pictured after being targeted by the louts.

The building had numerous swastikas splattered across its walls, while another picture showed another two of the Nazi symbols painted at the Mall Walk in the town.

A number of others were spotted throughout Thurso - and after being "revolted" by the graffiti, community activist Alexander Glasgow quickly rallied around to organise a clean up.

Alexander, 45, told the Record: "It was upsetting to see these over town.

"The local reaction was a mixture of weariness at the ongoing anti-social behaviour and revulsion at the sight of the swastika.

"I took the video of the swastikas at the solicitor's office on the riverfront, plus there were two others spray-painted on at the Mall Walk, Victoria Walk, one on Old Man's Rest, another on the Pennyland Mausoleum and another at Thurso High School.

"There were others elsewhere as well but I don't know precise locations. A major effort has been launched to remove them ASAP."

Alexander says the council acted quickly to support the locals in their bid to remove the offensive graffiti.

He said: "It's good the council and other volunteers sprang into action. There'll be more effort done by us all over the next couple of days.

"We're just relieved the graffiti can be removed so quickly."

Police have now confirmed that three schoolboys have been charged over the "number of hateful messages" which were spray-painted in the town this week.

A Police Scotland spokesperson said: "Three male youths have been traced in connection with a number of hateful messages which were spray painted at various locations in Thurso between Monday, May 9 and Tuesday, May 10.

"The youths, aged 14, 15 and 16 , will be reported to the Children’s Reporter and the Procurator Fiscal."

A council spokesperson added: “The Highland Council and volunteers from the community are taking action to remove the offensive graffiti and police are investigating the crime.

"Graffiti, while not only a criminal offence, is a total waste of taxpayers’ money as to clean it up diverts resources from council works and services."

Alexander Glasgow is a member of the Thurso In Colour group, which is dedicated to improving the town. To visit the group's Facebook page, click here.

His beloved villa has been daubed in graffiti by protesters, and a museum dedicated to his father ransacked. Now former…

Reuters
Gabriel will be blind by the time he's 40. But his vision for his community is 'crystal clear'

Gabriel will be blind by the time he's 40 — but his vision for his community is "crystal clear".

ABC News
One subscription that gives you access to news from hundreds of sites
Five key things we learnt from Wirral’s 13,000 homes plan