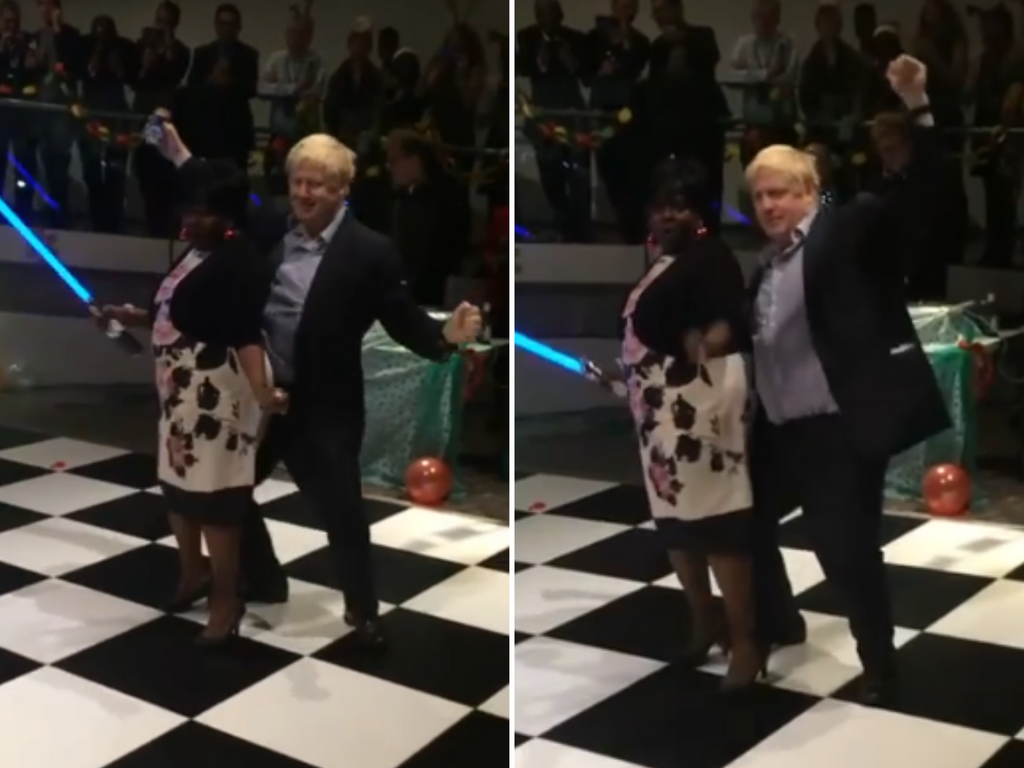 A video of Boris Johnson dancing with a woman holding a lightsaber has resurfaced amid the latest party scandal.

The clip, showing the prime minister throwing some questionable shapes to Lionel Richie’s All Night Long, has been doing the rounds on social media after it emerged that Downing Street staff were invited to a “bring your own booze” gathering in May 2020.

The prime minister apologised for attending, claiming he thought it was a “work event”.

Although his apology sparked its fair share of memes in and of itself, what’s really captured social media’s attention in the last few days has been the video of Johnson giving it socks on the dancefloor.

One of the clips of Johnson dancing has racked up 1.9 million views, while another has received 740,000.

Social media enjoyed the video, but it left people feeling a little confused, too.

On Instagram, one commenter joked: “Is this the basement of No 10?”

And now I wish I had access to a light saber in my clubbing years 💃🤣 Also, Boris Johnson is possibly the only person on this entire planet that dances worse than me. Yippee he’s good for something 🍻 https://t.co/TPwOF8bid9

This was just sent to me on WhatsApp, and it's...I don't know how to describe it 😂

Boris Johnson dancing with someone who has a light saber.

If anyone knows the original source of this, please tag them! pic.twitter.com/3bRwSg2iSg

Just so many questions… https://t.co/VS9zqMWbOO

This is not from the ‘Downing Street party’ but an older one apparently. Boris Johnson dancing with a lady wielding a light saber. He was mayor and she was also a London official. 😂😂pic.twitter.com/nVK2X4H6eO

Politics reporter Henry Dyer suggests that the footage could have been taken during a City Hall Christmas party during Johnson’s days as mayor.

You've seen Michael Gove dancing - here's Boris Johnson dancing at a City Hall christmas party with who I think is the then chair of the London Assembly, who is wielding a lightsaber pic.twitter.com/QVcujm2gDE

It appears the lightsaber was a gift from Lucas Films, according to Johnson’s gift registry from June 2013.

He previously told Reuters in 2019 that he identifies with “the guy with the lightsaber” from the Star Wars films, and said it was manufactured in his constituency, South Ruislip.

Speaking about receiving a lightsaber - presumably, the same one featured in the clip - from Count Dooku actor Christopher Lee, the now-prime minister revealed he kept it in his Westminster office.

Downing Street Partygate: How many bottles of wine would it take to fill a suitcase?