Victory for Sinn Fein stokes fears of a united Ireland

Sinn Fein was on Friday night on course to be the biggest party in Stormont following Northern Ireland elections, with unionists warning the result could cost the country its place in the United Kingdom.

The nationalist party – once the political wing of the IRA – won 29 per cent of first preference votes, according to the BBC, while the pro-UK Democratic Unionist Party (DUP) won 21 per cent.

With 32 of 90 seats filled, Sinn Fein has secured 16 compared to the DUP's seven.

If its victory is confirmed when the result is declared on Saturday, it would be the first time a party wanting a united Ireland has won the elections for the Northern Ireland executive.

The result would plunge the power-sharing deal into uncertainty, with the DUP warning that it may not agree to power-sharing in Stormont, and complicate talks on post-Brexit trade checks.

The historic shift looks to have overturned more than a century of unionist and protestant majorities in Northern Ireland since the country was created in 1921 and separated from independent and largely Catholic South Ireland.

It is also likely to reignite debate about the possibility of a referendum on Northern Ireland and Ireland becoming one country – something of which unionists warned during the campaign.

Oliver Dowden, the Conservative Party chairman, said the UK Government would "make the case" for the Union if it came to that, but stressed that a vote would only ever take place if there was "sustained majority" for a united Ireland.

The development could prove the most consequential result in Thursday's local elections, which saw Boris Johnson's Conservatives sustain significant losses.

Projected vote share had Labour clearly on top with 35 per cent, followed by the Tories on 30 per cent and the Liberal Democrats on a better-than-expected 19 per cent.

Labour stormed to success in London, taking Westminster, Wandsworth and Barnet councils from the Tories and overtaking them as the second party in Scotland.

The SNP finished as the biggest party in the Scottish council elections and insisted it was "full steam ahead" for an independence referendum next year.

But Sir Keir Starmer, the party leader, struggled to make gains in traditional Labour Red Wall heartlands in the Midlands and North, enabling Mr Johnson to talk about a night of "mixed results".

There was less to cheer about for the Prime Minister in traditional Tory-voting rural constituencies in the South, where the Liberal Democrats picked up scores of seats.

In Northern Ireland, the DUP faced defeat – and the prospect of a Sinn Fein First Minister – after more than 20 years as the biggest party.

Sir Jeffrey Donaldson, the DUP leader, had called on those wanting to stay part of the UK to rally behind his party to prevent a border poll – which must be called by both London and Dublin – and oppose the post-Brexit Northern Ireland Protocol.

But the first results showed the DUP was bleeding support to hardline and more moderate unionists, as well as to the centrist cross-community Alliance Party, and faced the loss of its majority.

Michelle O'Neill, the Sinn Fein vice-president, said: "We did say this was going to be an election about the future. It is potentially going to be a historic election for many reasons."

She is planning for reunification but played down any prospect of an immediate border poll in a campaign focused on healthcare and the cost of living.

Mr Dowden vowed to fight to keep the Union together if a border poll was triggered by a "sustained majority of nationalist opinion in favour of a united Ireland".

He told Sky News he was "confident" the Government could "make the case"against the break-up of the UK in a referendum, which some commentators argue is unlikely to be held in the near future.

Mr Johnson, speaking on Friday before the result was known, hinted that he might take a tougher line with Brussels on renegotiating post-Brexit border checks for goods moving into and out of Northern Ireland.

The Prime Minister said: "The most important thing is that we continue to support the balance of the Good Friday Agreement across all communities in Northern Ireland. That's what we're going to do.

"And whatever arrangements we have, they've got to have cross-community support. That's what the Good Friday Agreement is all about."

Edwin Poots, the former DUP leader, said Mr Johnson must put the removal of the protocol in the Queen's Speech next week or the agreement would be "dead in the water". Downing Street indicated this week it would not publicly commit to such a move.

Naomi Long, the leader of the Alliance Party – which has surged to become the third-largest party after winning support from voters tired of old sectarian divides – said it had been a "good day".

The DUP has said it will not enter power-sharing without an agreement that the Northern Ireland Protocol, which created the Irish Sea border, be removed or replaced.

It collapsed Stormont in February in protest over the Brexit treaty, and Northern Ireland faces potentially months of deadlock talks between the two parties.

Northern Ireland's electoral office said that 873,787 total votes were polled in the Stormont elections and that turnout was 63.61 per cent – higher than expected. 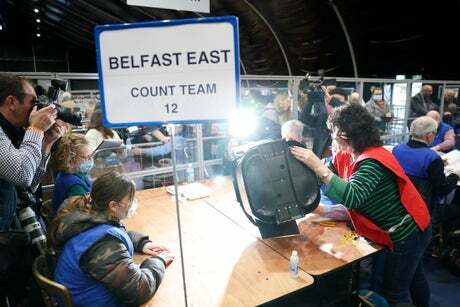 As counting concluded in the early hours of Sunday morning, it became the largest party at Stormont for the first…

Sinn Fein supports Irish reunification, arguing Brexit accelerated the debate but what will a win mean for the future of…