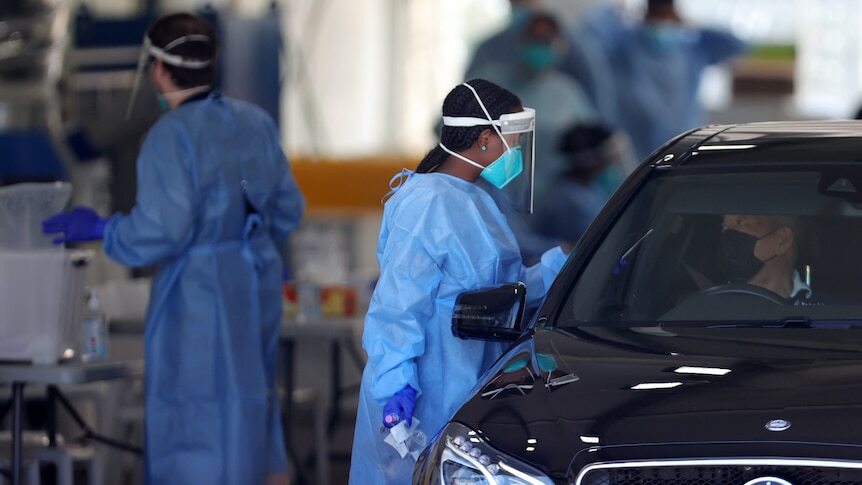 The number of COVID-19 patients in Victorian hospitals has hit a new pandemic high, as the wave of Omicron infections continues to place pressure on the healthcare system.

There are now 861 COVID-19 patients in hospital, with 117 patients in intensive care and 27 on ventilators.

The state's previous peak for hospitalisations was 851, reported on October 18 as the state battled a wave of Delta infections.

Mr Andrews said while the rapid rise in hospital patients with COVID-19 was incredibly difficult, most patients were not requiring intensive care or ventilators.

"It is a relatively small number of people who are gravely ill," he said, noting the measures Victorians were already taking to isolate and get vaccinated were preventing hospital cases from hitting "unsustainable" levels.

There are now more than 171,000 active cases in the state, sending thousands of essential workers from every major industry into isolation, including more than 4,000 healthcare workers.

When asked about reports some Australian healthcare workers were being pressured to return to work after testing positive to COVID-19, Mr Andrews said he would seek more information from the department but "no one's being asked to do anything that isn't safe for them and for the patients they'd be caring for".

"Obviously your virus status becomes relevant based on the work you're doing," he said.

"If you're working on a cancer ward with a whole lot of immunocompromised people then probably not.

Last week, the government announced healthcare workers who were household contacts of positive cases would be able to return to work under "very strict" infection prevention measures.

The measures include undertaking daily rapid antigen tests, wearing N-95 masks and agreeing not to share meal breaks with other workers.

A government spokesperson said healthcare workers who tested positive to COVID-19 were still required to self-isolate for seven days.

"A range of strategies [is] being enacted to manage the impact of COVID on staffing levels, including recruitment of additional staff, use of alternative workforce models and new furlough guidance for household contacts," they said.

Victoria has reported 37,994 new infections, but the figure is an underestimation of the true rise in infections due to overwhelmed PCR testing systems and a nationwide shortage in rapid antigen testing kits.

A further 13 deaths have taken the current outbreak's toll to 771.

The remaining 18,503 cases were reported by Victorians from at-home rapid antigen tests (RATs).

Roughly 17 per cent of Victorian adults have received three doses of a COVID-19 vaccine.

Premier Daniel Andrews said roughly half of those who were eligible for a third dose had received one so far.

"We have to do better than that, in coming weeks," he said.

He said the state government would spend another $4 million to support GPs and pharmacists to go into schools after-hours so that more children could be vaccinated in a familiar setting.

Meanwhile, Victoria's opposition has called for an extension of the the Commercial Tenancy Relief Scheme, which is due to expire on January 15.

The scheme was introduced to assist small- and medium-sized businesses that had been significantly affected by the COVID-19 pandemic and associated restrictions.

Deputy Liberal Leader David Southwick said the scheme should be extended for another three months to help businesses that are still struggling.

"We're also calling for the government to provide more incentives, in terms of grants, to keep the doors open," he said.

The sheer volume of Omicron cases is expected to continue to overwhelm the health system, where thousands of patients are missing out on elective surgeries as hospital capacity tightens.

Overnight, Ambulance Victoria issued its second Code Red warning in the space of a week, alerting the public to ambulance delays due to extreme demand.

Health authorities have warned unnecessary calls to triple-0 from anxious Victorians with COVID-19 are contributing to the delays.

People are being urged to only call for an ambulance if it is a medical emergency, and to otherwise seek help from their GP or NURSE-ON-CALL (1300 60 60 24).

Victorian Ambulance Union assistant secretary Olga Bartasek said at one point during the night, 21 time-critical cases faced a delay in an ambulance being dispatched to respond.

"If it's the case of a cardiac arrest, then minutes absolutely count," she said.

She said given the COVID-19 peak was yet to occur, she feared there would be more cases of Code Red in the coming weeks.

"If you are feeling a bit ill, contact your GP during the day and see if you can get some sort of treatment at that time."