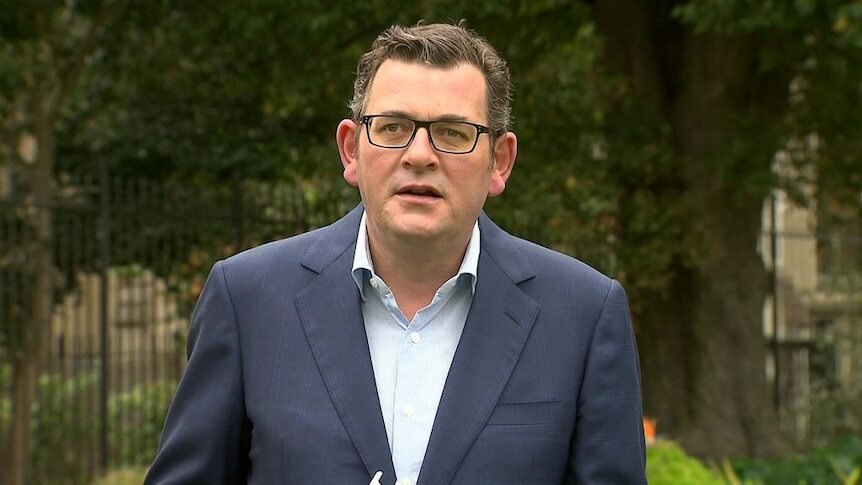 Victoria has recorded 392 new locally acquired cases of COVID-19, as vaccines and new pop-up clinics are being directed to Melbourne's hotspot areas.

Of the new cases, only 107 have been linked so far to known outbreaks.

The infections were detected among 48,063 test results on Saturday.

There are currently 3,112 active cases in the state, with all but four of those acquired in the community. About 80 per cent of those infections are in people aged under 50.

There were 36,534 vaccinations administered at state-run sites on Saturday.

More than 40 per cent of Victorians aged 16 and above have had both doses of a COVID-19 vaccine, as the state inches closer to the 70 per cent and 80 per cent targets that will see greater freedoms granted.

There are now 147 people in Victorian hospitals with COVID-19, with 34 of those in an intensive care unit and 28 people receiving ventilation.

Only one person in hospital has had two doses of a vaccine, Premier Daniel Andrews said, and they are understood not to be receiving ventilation.

As part of the push to see more Victorians protected against COVID-19, the government is launching new pop-up vaccination sites across 100 priority postcodes.

The immediate focus over the next fortnight will be on suburbs in the north and west of Melbourne, where the majority of the infections have been found during this outbreak.

Five community pop-ups will initially administer doses across the Hume and Casey areas in the north and west, and the Dandenong local government area in the south-east.

"And taking the program to you is just as important as people really coming in very strong numbers to the state clinics that we have already set up."

Medical students who are qualified but may not have certifications will be employed to expand the vaccination rollout and assist at clinics.

Opening hours for COVID testing at state run sites will be extended, with sites servicing northern and western suburbs prioritised.

Melton, Wyndham, the Ford factory in Campbellfield, the Showgrounds and Broadmeadows Town Hall are among the sites that will move to 12-hour days.

Health department deputy secretary Naomi Bromley said the state should have the staff to run eight or nine pop up clinics at one time.

Prime Minister Scott Morrison has confirmed some of the 1 million Moderna vaccines arriving next week from EU nations will be sent to Melbourne's northern and western suburbs.

Mr Andrews said he was not aware of the Prime Minister's announcement before it was made, confirming it would be in addition to the state blitz.

Authorities are concerned about the spread of COVID-19 regional Victoria, with the virus detected in Ballarat wastewater and a number of exposure sites added around Geelong, Lorne and Daylesford.

Five more people in regional Victoria returned a positive test result on Saturday— one in Geelong, a close contact of a known case, one in Mildura who was in quarantine and one in the Macedon Ranges linked to a V/Line outbreak.

It follows the easing of lockdown restrictions in regional Victoria, except Greater Shepparton, on Friday.

There have been dozens of new infections linked to childcare centres, including in the suburbs of Glenroy, Truganina and Roxburgh Park.

Professor O'Brien said a "significant outbreak" emerging at the Fitzroy Community School in North Fitzroy, which is now linked to at least 30 infections.

There has been increasing concern about spread of the virus at construction sites, which can only operate under about 25 per cent capacity, but no new infections were linked to the Box Hill or Exhibition Street sites on Sunday.

The 392 cases detected on Saturday represents the second-highest daily case count of the outbreak so far. The highest was 450 from test results processed on Friday.

Epidemiologist and World Health Organization adviser Mary-Louise McLaws said the state was on track to see cases continue to climb like in Greater Sydney.

"Sadly, Victoria, unless they do something remarkable at the moment, will go on the same projection as Greater Sydney and that is a thousand cases at some stage per day," she told ABC News Breakfast.

Authorities have effectively abandoned the goal of COVID-zero in the state, but have expressed cautious optimism a quickening vaccination rate will prevent the situation worsening as much as it has in Sydney.

Victoria's regional transport system has been thrown into chaos after at least four people linked to V/Line trains tested positive to COVID-19.

Coaches will replace all trains on the regional network, which also runs services through Melbourne.

"V/Line and the Department of Transport have been working closely with the Department of Health throughout this outbreak, and out of an abundance of caution we are suspending all trains today to limit the spread and to keep everyone safe," a spokesperson said in a statement.

"After four positive tests the health advice has so far required more than 180 drivers and operational staff to isolate. Replacing trains with coaches will allow for services to continue to operate, give passengers certainty and help contain the outbreak."

The first positive case linked to the V/Line services was reported on Thursday.

Detainees at the Parkville Youth Justice Precinct have been locked down further after a staff member contracted COVID-19.

The Parkville centre, in Melbourne's inner north, was listed as an exposure site on Saturday.

"The movement of young people has been temporarily restricted while contact tracing is underway," the spokesperson said.

"Additional staff are being brought in to manage the impacts of furloughing staff. At this stage it is not expected to affect operations at the facility."

At this stage, all other test results from the centre have come back negative.