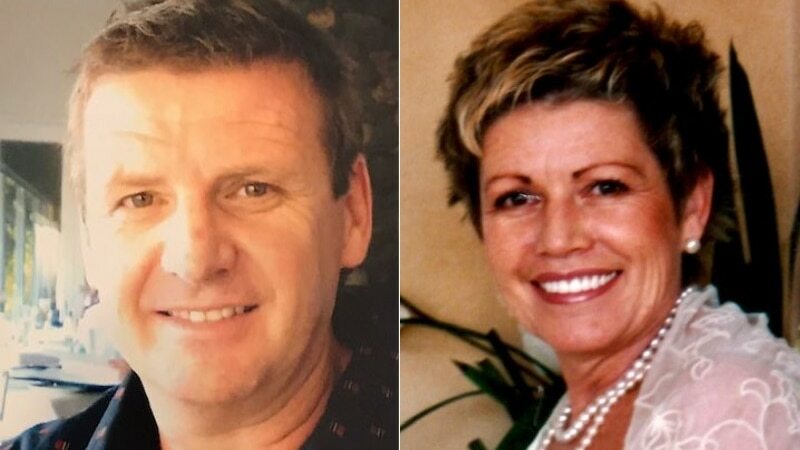 An accused double murderer was acting "strangely and erratically" outside his apartment complex after allegedly fatally stabbing his neighbour and her brother,  the WA Supreme Court has heard.

Mr Johnson had gone to Ms Collins' Leonard Street penthouse apartment to check on her after family members grew concerned when they could not get in contact with her.

Today another resident of the apartment complex, Valen Hunter, testfied she was in her unit on Easter Sunday when she heard a "muffled male scream" between midday and 2:00pm.

Ms Hunter said the scream "only lasted a couple of seconds" and appeared to come from above her unit, which was on the fourth floor.

Ms Hunter told the court she then saw Mr Fawcett, whom she knew, standing outside the unit complex about 2:30pm.

"He was holding his arm … and also texting on his phone."

Ms Hunter said she used her mobile phone to take photographs of Mr Fawcett, who a short time later was picked up by an elderly lady in a silver car.

The court heard the car was being driven by Mr Fawcett's grandmother Lynette, who provided a statement to police the next day, which was read to the jury.

In it, 73-year-old Ms Fawcett said her grandson called her landline about 11:30am on Easter Sunday and asked if he could borrow a shovel or spade, saying he would come around later to collect it.

About an hour later he telephoned again to say he did not need it, Ms Fawcett said.

Ms Fawcett said he spoke to her again at 2:15pm, asking if she could come and collect him because he had fallen over and hurt his shoulder.

She said when her grandson got in her car, he was wearing a pair of black gloves which she thought was due to coronavirus.

She then drove him to a medical centre in Belmont where he was told by a doctor he needed to go to hospital.

"He was crying, he had tears streaming down his face because he was in so much pain," she said.

Ms Fawcett said she could see blood on his shirt and he told her he "must have done that when I fell over."

She said her grandson directed her to Royal Perth Hospital and dropped him off at the emergency department before driving away.

Mr Fawcett was arrested in the hospital the next day.

He denies having anything to do with Ms Collins' death but admits fatally injuring Mr Johnson, maintaining he acted in self-defence.

Mr Fawcett claims Mr Johnson attacked him after drawing the conclusion he was responsible for his sister's death.

Defence lawyer Simon Freitag SC said the two had become involved in a "struggle for their lives" and Mr Johnson was fatally stabbed by Mr Fawcett.

The trial is scheduled to run for three weeks.