Fugitive Alabama corrections officer Vicky White and capital murder suspect Casey Cole White were planning to have a shootout with police officers before he was captured and she shot herself dead, according to authorities.

Speaking at a press conference in Indiana on Tuesday, Vanderburgh County Sheriff Dave Wedding said that the jailhouse lovers “wanted to engage in a shootout with law enforcement” but they were rammed off the road by officers, preventing them from carrying out their plan.

A trove of weapons including at least four handguns, a semiautomatic gun and an AR-15 were found inside their vehicle, the sheriff said. Around $29,000 in cash and multiple red and blonde wigs were also recovered.

White and Ms White were tracked down to Evansville, Indiana, and taken into custody following a brief car chase on Monday. While the 38-year-old inmate surrendered to authorities on the scene, Ms White, 56, was rushed to hospital with a gunshot wound to the head, according to officials. She died from her injuries just after 7pm and investigators believe she shot herself.

When asked if White had expressed any remorse for her death, Sheriff Wedding simply replied: “No.”

Following his arrest, White allegedly admitted “that they were going to have a shootout” that would likely result in “both of them losing their lives”, the sheriff told reporters.

The net closed in on the suspects after authorities learned that the couple were staying at a hotel in Evansville – just across from Vanderburgh County Sheriff’s Office.

The Whites, who are not related, had booked a 14-day stay there, said Sheriff Wedding.

Officers were led to the hotel after initially receiving a tip about an abandoned truck at a nearby car wash.

Prior to their arrest, officials confirmed on Monday that the truck had been used by the fugitives and released surveillance images showing White at the car wash last Tuesday.

The couple allegedly left the vehicle and switched into another vehicle – a Cadillac.

Sheriff Wedding said that a police officer “doing good due diligence” spotted the Cadillac in the parking lot of the hotel on Monday and a taskforce descended on the site, beginning surveillance there.

The suspects were then seen exiting the hotel, getting into the Cadillac and driving away.

At that point, law enforcement gave chase and rammed the couple’s car off the road into a ditch.

The sheriff said that this action likely saved lives as it foiled the Whites’ plans to get into a shootout with officers.

“That action may have saved many of my deputies’ and law enforcement officers’ lives,” he said.

Once the car crashed, Ms White shot herself in the head while White “gave up”, he said.

Lifesaving measures were performed on the 56-year-old and she was rushed to hospital, but she succumbed to her injuries that night.

A preliminary investigation indicates that Ms White’s gunshot wound was self-inflicted and that she was not shot by her convict lover, the sheriff said.

“We believe that she may have taken her own life. But we will wait till the coroner’s office examines the body to make a confirmation,” he said.

No law enforcement officers opened fire during the encounter with the fugitives.

An autopsy will be carried out on the corrections officer on Tuesday.

When asked if Ms White was on a 911 call during the police chase, the sheriff said that “from what I understand she was”.

Audio from a 911 call revealed a dispatcher saying “we believe we possibly have them on 911,” reported CNN.

“We could hear her on the line saying she had her finger on the trigger,” said the dispatcher.

The audio has not been released by authorities and it is not clear what Ms White is heard saying on the call.

Immediately after his arrest, White told officers that he was innocent of causing Ms White’s injuries, US Marshal Marty Keeley told CNN on Monday night.

However, Lauderdale County Sheriff Rick Singleton told NewsNationNow’s Brian Entin that officials weren’t ruling anything out and that he would not be surprised if her gunshot wound was actually not self-inflicted.

Sheriff Singleton had said earlier that he hoped Ms White would survive, saying that she had many questions to answer.

“We don’t wish any ill will on Vicky, but she has some answers to give us,” he said.

The Whites were not married, Sheriff Wedding confirmed on Tuesday.

Finally back in police custody after his 10-day prison break, White is said to have given a lengthy interview with authorities.

The 38-year-old capital murder suspect appeared in court virtually on Tuesday morning where he waived his right to an extradition hearing, telling Judge Robert Pigman: “I want to go back to Alabama.”

Arrangements are now being made to return White to custody in Alabama where he will end up back in the same jail from which he escaped and from where he is believed to have first met Ms White.

A new mugshot released by the Vanderburgh County Sheriff’s Office shows he had adopted a clean-shaven look – having gotten rid of the facial hair he was sporting before his time on the run in images shared by law enforcement during the manhunt.

But when an officer arrived on the scene they said they couldn’t do anything as the vehicle hadn’t been reported stolen, he said.

The business owner had the vehicle towed away himself last Wednesday.

It was only on Sunday when he was contacted by the US Marshals Service about the truck and Mr Stinson checked his surveillance footage, finding White on camera last Tuesday.

On Monday, officials released the images and confirmed the truck as belonging to the fugitives.

In Tuesday’s press conference, officials said that an officer ran the plate back on 2 May during routine patrols of parking lots but because it wasn’t reported as stolen didn’t take action.

When the car wash owner also reported the vehicle two days later, the officer told him he would have to wait 48 hours before it could be towed or he could remove it on his own.

At that time, officials said there was no indication it was connected to the fugitives on the run from Alabama.

Evansville is about 175 miles north of Williamson County, Tennessee, where the couple abandoned their first getaway car – a rust-coloured 2007 Ford Edge.

On Friday, the US Marshals Service announced that the Ford Edge had been found along a rural road in Tennessee around a two hour drive north of the Lauderdale County jail.

Officials said the couple left the jail in Ms White’s patrol car before abandoning the vehicle in the parking lot of a nearby shopping centre and changing into the getaway car.

However, officials believe they were forced to switch vehicles again after the Ford Edge broke down.

The Ford Edge was actually located just hours after the pair disappeared and was taken to a tow lot in Williamson County – but its connection to the case was only realised on Friday.

The second getaway vehicle was reported missing near Nashville, Tennessee, sometime after the Ford Edge was found abandoned.

A nationwide manhunt was first launched back on 29 April when Ms White picked the inmate up from Lauderdale County jail at around 9.30am claiming that she was taking him for a mental health evaluation at Lauderdale County Courthouse.

She told her coworkers that once she had escorted him to court she was going to seek medical attention for herself as she felt unwell.

The pair never arrived at the courthouse.

Officials said that they later learned that White had no scheduled court appearance or appointments that day.

Ms White’s 2013 Ford Taurus patrol car was found abandoned in the parking lot of a shopping centre not far from the jail at around 11am that day.

But several more hours passed before the pair fell under suspicion.

At around 3.30pm that afternoon, Ms White’s coworkers grew concerned that she hadn’t returned and they were unable to reach her by phone.

It was only then that they also realised that White had also not returned to jail.

With Ms White now dead, many questions remain unanswered around both the shock prison escape and the alleged suicide of the 56-year-old widow who had a two-decades-long “exemplary” career.

Sheriff Singleton said that the couple had been in what he described as a “jailhouse romance” or “special relationship” for the last two years.

He said that there is evidence that they had been in contact since 2020 when White was transferred out of the county jail after he was rumbled plotting another prison escape.

Ms White allegedly communicated with him by phone before the inmate was then transferred back to the local jail in February.

On his return, White had received special treatment from the corrections officer including being given extra food on his trays, officials said.

Ms White had also sold her home just five weeks earlier for well below its market value, withdrew $90,000 in cash from her bank accounts and filed for retirement days before the pair vanished.

Her last day of work was the day she disappeared, though her retirement papers had not been finalised.

After selling her home, she moved in with her mother who previously said that she knew nothing about her daughter’s plans to retire and had never heard her speak of White.

In the early aftermath of the prison escape, Ms White was described as an “exemplary employee” who had repeatedly won employee of the year awards.

White will now face fresh charges over the prison escape.

He was awaiting trial on capital murder charges over the 2015 stabbing murder of 58-year-old mother Connie Ridgeway.

Ms Ridgeway was found stabbed to death in her apartment in Rogersville, Alabama, on 23 October 2015.

The case went unsolved for five years until White sent a letter to authorities confessing to the crime.

At the time he was already behind bars serving a 75-year sentence after being convicted of a crime spree in both Alabama and Tennessee.

The spree includes a home invasion, carjacking and a police chase, with White shooting one person and holding six at gunpoint.

In 2020, White was charged with two counts of capital murder over the killing of Ms Ridgeway.

The Marshals Service said that White had also threatened to kill his ex-girlfriend and her sister in 2015, and previously said that he wanted to be killed by police. 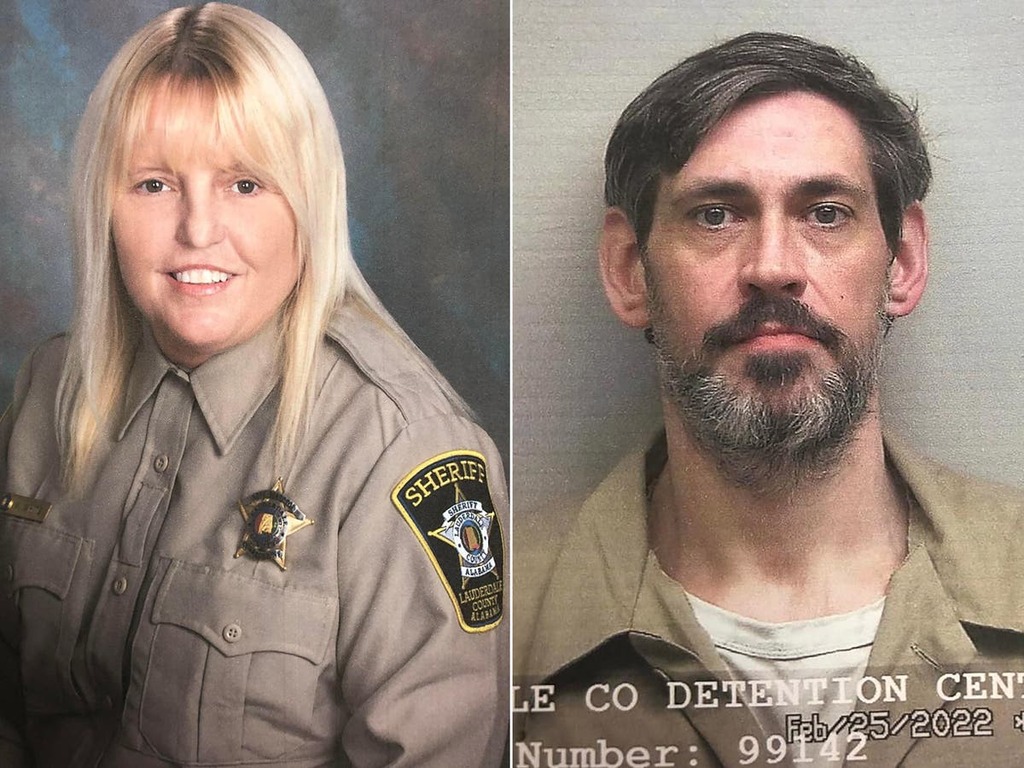