Vaccine plea from Australian artists, as research shows COVID-related income losses have left many below the poverty line 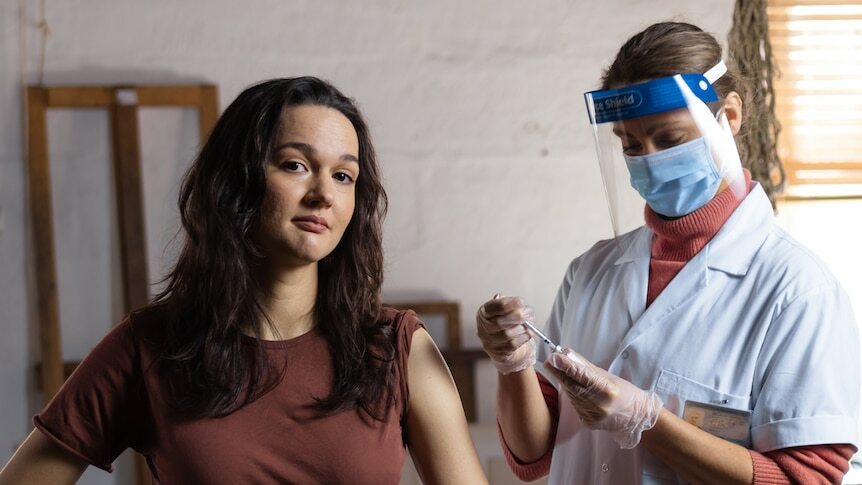 If staying afloat financially during the pandemic meant giving up a business you had spent 20 years building, what would you do?

It is a question Chrissy Foreman has been wrestling with for the past 18 months.

Chrissy is a 42-year-old artist and single mother from Redcliffe, a sleepy seaside town of about 10,000 people on Queensland's Moreton Bay peninsula.

Chrissy has called Redcliffe home on and off for 30 years. She teaches community art classes in addition to selling her original artworks, and was partway through a master's in art therapy when COVID-19 hit. Chrissy and her 10-year-old son have been living in a granny flat at the back of her family home to save on rent during the pandemic, while also helping to care for her elderly parents.

"I was studying, trying to keep my business afloat, and then I had to home school on top of that and I just lost it. It was too much," she says.

When her usual income streams ran dry, Chrissy paused study to focus on saving her business. She moved her workshops online, but attendance has fallen by 80 per cent compared with pre-COVID levels and she has struggled to sell her artworks because of lockdown and social distancing restrictions.

"It's been a gigantic loss in terms of my financial capacity to teach and to sell my works because I haven't been allowed out in the community.

Typically, Chrissy earns between $35,000–$45,000 a year. As a sole trader, she was eligible for JobKeeper and received support for about eight months.

"Even after 20 years of being in practice, I'm still a low-income earner. So, when COVID came along on top of that, it was just devastating."

Including JobKeeper, Chrissy earned $24,000 last financial year; just $4,000 of that was derived from her work as an artist. Weekly, that works out to be $440 after tax, which is $306 below the poverty line for a single working parent.

With widespread shutdowns across the arts sector, it has been difficult for Chrissy to find other arts-related work. When JobKeeper ended in March, Chrissy considered applying for JobSeeker (the federal government's support scheme for unemployed people, which amounted to $200 a week less than the JobKeeper payments) but found she could not meet the eligibility criteria without also giving up her arts practice.

"It's really tricky to access JobSeeker as an artist. If you're unemployed and looking for existing work, you meet the requirements, but if you're an artist and actively creating new works, that doesn't count."

To access support, Chrissy would have been required to seek non-arts-related work and effectively stop making art — a dilemma faced by many artists seeking income support during the pandemic.

"It's either meant abandoning 20 years of hard work building my art business, and just going out and getting any old job, or constantly pivoting to see if I can find new ways to bring in income."

Chrissy has been living on savings for most of this year in order to keep her business running and says "pivot fatigue" has set in.

"As an artist, it's really tricky to maintain your mental health and wellbeing because you've got all of this drive to create and to help people through this process, but very little financial support and ability to connect with the community to do it.

Artists living below the poverty line

Chrissy's is an all too common experience for artists during the pandemic.

According to new research conducted by the National Association for the Visual Arts (NAVA), one in two visual artists experienced an income decline of between 20–100 per cent last financial year.

A sobering four in five artists and one in two arts workers earned less than $25,000 over the year, which is more than $100 a week below the poverty line for a single person with no dependents.

"That figure of $25,000 may be a misnomer in itself if people are being paid a fee for commissions and those commissions are being delayed, which has happened to artists for over a year," says NAVA Co-Director Mimi Crowe.

Among artists surveyed, 18 per cent earned no income at all from their artist work last financial year, compared with 13 per cent of arts workers.

A significant majority of respondents (86 per cent) said the pandemic negatively impacted their arts practice, reducing their ability to make and exhibit work and earn income.

NAVA undertook the survey to shed light on the way that the pandemic and lockdowns are affecting the visual arts community.

Crowe says: "We'd been hearing how people have been struggling. We know that artists often work as educators, and curators may also be artists, which means people have been doubly hit when galleries and museums have closed and exhibitions and festivals have been cancelled."

Only 21 per cent of artists surveyed said that they qualified for JobSeeker, and while art sales typically make up the highest proportion of an artist's income, sales fell by 72 per cent last financial year, the study found.

Crowe says many artists are slipping through the cracks when it comes to government support, especially those who are casually employed and have been ineligible for wage subsidies.

The survey results indicate that casual workers are also preferencing retaining employment over applying for JobSeeker, but are being given far fewer hours during the pandemic — and it is not enough to live on.

"Often [what they earn from reduced hours] is less than JobSeeker, but if they don't keep working the few hours they get, they will lose their jobs when things reopen. Many are taking money out of super," Crowe says.

As part of its economic response to COVID-19, the Federal government has provided $40 million to Support Act, which traditionally offers crisis funding and mental health services to the music industry. Earlier this year, that funding was made additionally available to performing artists, but the visual arts have been excluded.

NAVA has been lobbying the federal government to make crisis payments available to visual artists through Support Act or by making a contribution to NAVA's Benevolent Fund for artists.

"We know the arts sector continues to face challenges unique to their industry, which is why we acted quickly in establishing extensive support throughout the pandemic, totalling $475 million," a spokesperson for the Minister for Communications, Urban Infrastructure, Cities and the Arts Paul Fletcher says.

To date, only 10 per cent of RISE funding has been awarded to projects that partly or directly support visual artists.

Despite contributing $17 billion to national GDP in 2018-19, according to the Australia Institute, the arts has received substantially less funding than other sectors as part of the government's economic response to COVID-19. Since the start of the pandemic, the aviation sector has received $2.7 billion in support, while over $14 billion has been committed to infrastructure stimulus to support the construction sector.

That is nearly 30 times more than the amount allocated to the arts.

A further complicating factor is that funding has been split between subsectors of the arts. For example, the $20 million SCREEN fund is available only to independent cinema operators, while the $90 million Show Starter scheme is intended for mounting live productions.

As a result, only a fraction of the total investment is accessible depending on an artist's particular specialisation, and this has been particularly prohibitive for visual artists, who often work solo and don't have the backing of a bigger company.

Crowe says that without adequate ongoing support for the sector, the nation risks losing a generation of artists.

"Realistically, the sooner these galleries can start opening up. The sooner opportunities can return," Crowe says.

While artists are among the worst hit professions by rolling lockdowns and loopholes in government support, you are unlikely to hear them complain about vaccine mandates to return to work. In the new campaign Sit for an Artist, launched by NAVA this month, artists are calling on Australians to get vaccinated — in a bid to hasten the safe reopening of galleries and return to 'business as usual' for the sector.

This week, the Australia Council launched a similar campaign, #TakeYourSeats, targeting audiences for the performing arts.

"People want to come back to galleries, they are places where people feel good. There's no better way for people to feel connected, or to understand themselves in the world they live in [than through art]. Right now, more than ever, we need that work being made," Crowe says of NAVA's Sit for an Artist campaign.

As with most industries, achieving widespread vaccination (of between 80–90 per cent) is key to the arts sector's recovery. Promisingly, new data shows that arts audiences are very close to achieving that milestone.

According to the Audience Outlook Monitor, a data-gathering resource partly funded by the Australia Council for the Arts and created by Patternmakers, arts attendees are getting vaccinated at a faster rate than the general population.

In data published this week from their October 'Pulse Check' survey, Patternmakers reports 96 per cent of arts attendees are now partially or fully vaccinated, up from 73 per cent in July.

Data from July shows that people are more comfortable visiting museums and art spaces (93 per cent) than they are going to a local sporting match (71 per cent), using public transport (76 per cent), or flying domestically on a public airline (62 per cent).

While vaccine uptake is high among audiences, Palmer Williams says that "post-vaccine hesitancy" may be an additional hurdle in the sector's recovery. In NSW, ACT and Victoria, where outbreaks are continuing, audiences are slightly more risk-averse, with 43 per cent saying they are "ready to attend" arts events compared with 74 per cent nationally, according to data collected in October.

The findings also show that a majority of audiences (81 per cent) "feel encouraged" by vaccine passport requirements.

"I think it's vital that arts events are able to resume as quickly as possible so that we can bring people back together and rebuild, not only economically but socially as well," Palmer Williams says.

Chrissy Foreman agrees and says, despite the sizable challenges of the past 18 months, she remains hopeful that she will be able to continue to make art and eventually return to study.

"That's the thing with us artists — we want to work. We are some of the hardest workers you'll find because of the love that we have for what we do, and our desire to share that love with audiences runs deeply.

"But in saying that we still have to pay bills."