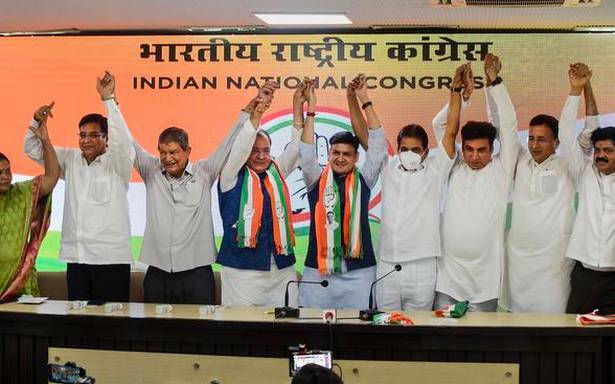 Transport Minister in the BJP-led Uttarakhand Government Yashpal Arya and his son Sanjeev Arya, who is a legislator from Nainital, joined the Congress on Monday. Uttarakhand Assembly poll is scheduled early next year.

This is a ‘ghar wapasi’ (home-coming) of sorts for Mr. Yashpal Arya who had been the Uttarakhand Pradesh Congress Committee president for seven years before joining the BJP. A prominent Dalit face in the State, he is a six-time MLA.

Mr. Yashpal Arya said that he felt relieved to be back in his home — the Congress. “Congress has a history of sacrifice, a legacy that we are proud to carry forward. Democracy in the country can be strengthened only if the Congress is strengthened,” he said.

Senior party leader Harish Rawat also indicated that more BJP leaders were likely to join the party. “Mr. Gandhi asked Mr. Arya, what is the difference between the BJP and the Congress. Mr. Arya said that the Congress has inner party democracy, which is completely absent in the BJP,” Mr. Rawat said.