By Sean Ingle at the London Stadium 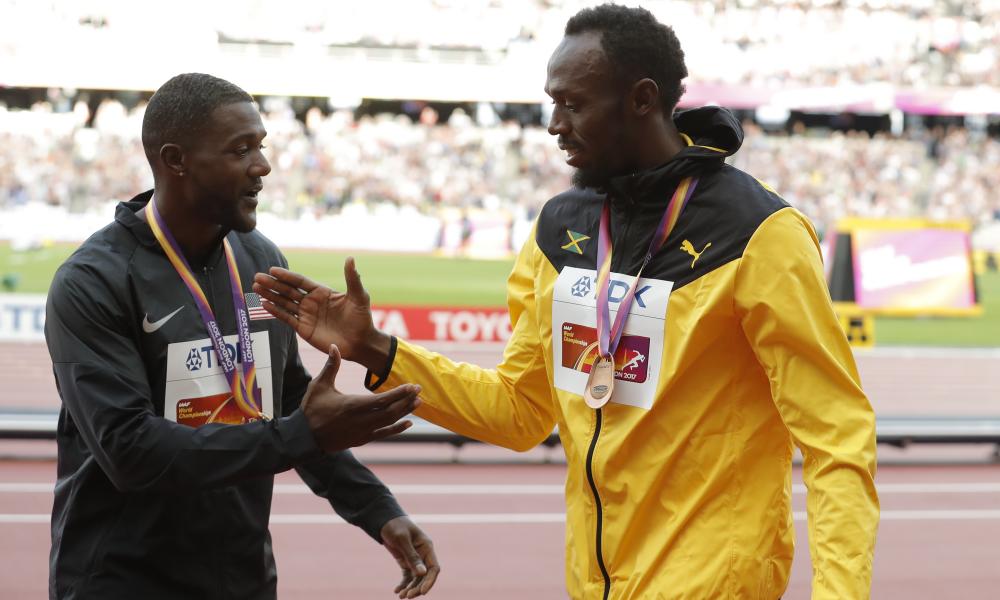 Usain Bolt has dismissed suggestions his shock world championships defeat by Justin Gatlin in the 100m on Saturday night was a disaster for athletics and has hailed the American as one of the best competitors he has faced.

Gatlin’s victory was greeted with a hail of boos, a legacy of two doping bans earlier in his career, and there were scattered boos when the 35-year-old was handed his gold at Sunday’s medal ceremony.

But Bolt, who had to settle for bronze, insisted the reactions of the crowd were unfair. “I always respected him as a competitor,” he said. “He’s one of the best I have faced.

Related: Usain Bolt’s time finally runs out, but he departs as the greatest champion of all

“For me he deserves to be here, he’s done his time and he’s worked hard to get back to being one of the best athletes. He’s run fast times, he’s back and he’s doing great. I look at him like any other athlete, as a competitor.”

Bolt, who will be 31 this month, also insisted he had made the right decision to continue after winning three golds at the Rio Olympics, following back problems and a troubled season which included the death of his close friend Germaine Mason, Britain’s Jamaican-born 2008 Olympic high jump silver medallist, in a road accident.

“I have no regrets,” Bolt said. “I came out and did my best; win, lose or draw. I did it for the fans, they wanted me to do one more season. No one is going to be happy to not win. But it doesn’t change anything in my career.”

Bolt also accepted he would have struggled to defeat the South African Wayde van Niekerk if he had run the 200m this week. The Olympic 400m champion ran a personal best of 19.84 over the shorter distance in June. Bolt said: “The 200m would probably be even worse than the 100m. I’m not in shape to win the 200m. It was a rough season and up and down, I lost my friend this year, it’s been rough. As Justin knows, when you’re old it’s hard getting back from injuries, year after year after year. It’s time for me to pack it up.”

“I’m excited to just live normally and get up and know that I have no training for once and can do what I want.” The Jamaican’s final competitive races will be in the 4x100m relay, which finishes on Saturday night.

Gatlin paid extensive tribute to Bolt, whose exit he said would leave a massive hole in track and field. “Usain is a great athlete, a great man,” he said. “He leaves a huge void with his character and athleticism. I respect him utmost. Every time we come across the finish line I shake his hand, I gave him a hug and tell him congratulations.”

The American insisted he did not know why he was considered the sport’s villain. “What do I do that makes me the bad boy?” he asked.

“Do I talk bad to anybody, do I give bad gestures? I don’t. I congratulate every athlete, shake their hand . That doesn’t sound like a trait of a bad boy to me.

“It sounds like the media wants to sensationalise and make me the bad boy because Usain’s a hero. I know you guys have a black hat and a white hat but, come on. I try and inspire and stay in my lane so I don’t see where the bad boy comes from.”

“I’ve served my time and done community service,” he added. “I’ve talked to kids and inspire them to walk the right path. That’s all I can do. Society does that with people who make mistakes and I hope that track and field does that too.”

However, Jessica Ennis-Hill, who collected her reallocated gold medal from the 2011 world championships in Daegu on Sunday night, has called for life bans to be introduced in athletics for drugs cheats. “It’s difficult,” she said when asked her reaction to Gatlin being booed.

“He’s served two bans and served his time but it’s one for the IAAF to step in. If we have lifetime bans we wouldn’t find ourselves in this situation and we wouldn’t hear the booing.”