US Open: Félix Auger-Aliassime reaches semi-final after Carlos Alcaraz retires – as it happened 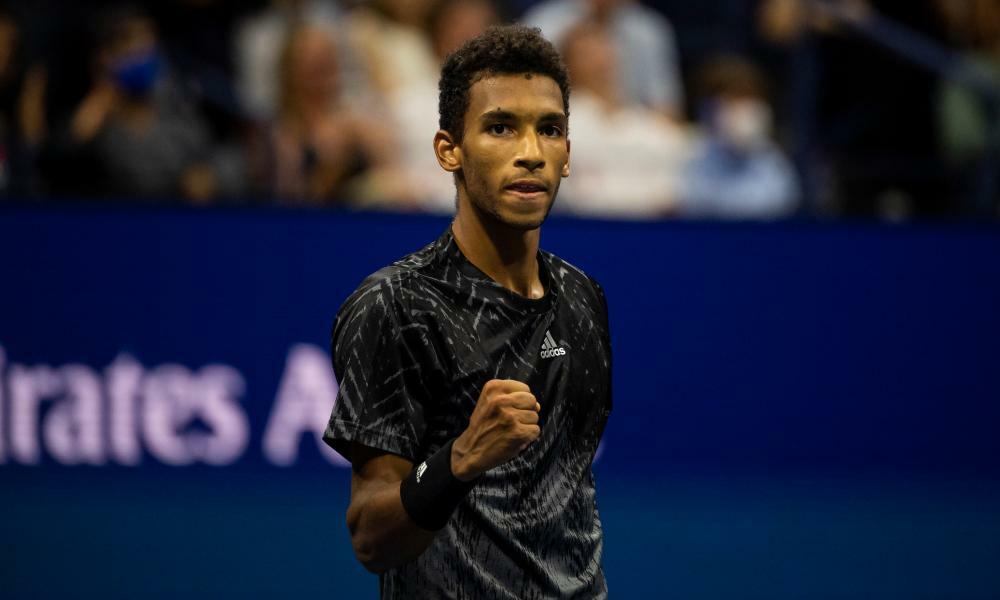 That’s all for tonight. Thanks as always for following along with us and be sure to check back for a full report off tonight’s match.

Auger-Aliassime is off court and doing press on the ESPN stage at the moment. Lots of FAA fans have grouped behind the ESPN stage chanting “Let’s go Fe-lix!” and “Fe-lix! Fe-lix!”

We’ve also just received word that Alcaraz will be coming to his post-match press conference in 35 minutes.

What a shocking ending to tonight’s hotly anticipated US Open quarter-final. Alcaraz had called for the trainer during the previous changeover but there was no indication he was really to pull the ripcord down a set and a break after only 68 minutes.

And it’s over! Alcaraz has retired from the match and Auger-Aliassime is through to the US Open semi-finals!

Alcaraz has called for a trainer during the changeover. He seems to be looking at both of the Spaniard’s legs. Auger-Aliassime crusies to a hold, capping it with a 125mph ace down the middle ...

Auger-Aliassime rattles off three quick points from love-30 down and all of a sudden he’s got a break point for a double-break lead. Alcaraz saves it but makes an unforced error off the backhand to give Auger-Aliassime a second look at a break. Auger-Aliassime squaders that too, by the finest of margins, missing a backhand at the end of a 13-shot rally. From there Alcaraz goes on to hold but it wasn’t easy – and he’s still down a break early in the second.

Another easy hold for Auger-Aliassime, who comfortably backs up the break, though the highlight of the game was surely Alcaraz’s backhand passing winner for 40-30.

An early opportunity for Auger-Aliassime as Alcaraz falls behind 30-40 on his opening service game of the second. And Alcaraz nets a forehand early in the rally on break point down to gift his opponent the sudden break.

Well, well, well. Auger-Aliassime goes down love-15 on his serve as Alcaraz slots a forehand volley winner. Auger-Aliassime’s fourth double fault of the night puts him behind love-30. Then an unforced error off the forehand side gives Alcaraz three break-point opportunities to get this opening set back on serve. Alcaraz misfires on a backhand to squander the first, then Auger-Aliassime crushes a pair of unreturnables to save the second and third. Deuce. Now Auger-Aliassime pounds a 114mph ace wide for set point ... and the Canadian converts it on the first chance when Alcaraz blinks first in a 15-shot rally. Fantastic stuff!

Alcaraz cruises to the stress-free hold and now Auger-Aliassime will serve for the set.

Auger-Aliassime races out to 40-love before making his second double fault of the night. He then nets a forehand early in the rally for 40-30. Now another double fault, third of the match, for deuce. He then finally gets a first serve in and smashes an inside-out winner for game point. He’s a perfect 11-for-11 when he gets the first serve in, which feels increasingly like the difference-making number of this match. Alcaraz wins the next point for deuce but Alcaraz follows with a 108mph ace and a dominant point behind a 116mph serve to hold. The Canadian kid took the long road but he’s backed up the break and Alcaraz will serve to stay in the opening set after the changeover.

Alcaraz falls behind 15-30 and it’s the Spanish teenager who faces the first pressure point for the server on either side all night. Auger-Aliassime then hits a forehand volley winner for 15-40 and a pair of break points. Alcaraz saves the first on a forced error then the second with a gorgeous forehand volley winner for deuce. A third break point comes about a couple of points later but Alcaraz saves that one too. Alcaraz then nets a backhand to give Auger-Aliassime a fourth break-point chance but Felix is able to convert it with a blazing forehand from the baseline that Alcaraz can’t return over the net. First blood to the Canadian!

Another hold for Auger-Aliassime, who hasn’t droppped a point when he’s gotten his first serve in: a perfect eight from eight.

An elementary, staccato hold for Alcaraz. On we go in the opening set.

Another straightforward hold for Auger-Aliassime, who threads a gorgeous drop shot that Alcaraz can’t retrieve for 40-15 then caps it with a 129mph service winner down the middle.

Alcaraz races out to 40-love, winning the first two points on a pair of muscular rallies, before misfiring on a forehand for 40-15. From there he holds easily thanks to a blistering forehand winner into the corner.

Auger-Aliassime holds his serve easily to open the match, crunching a 127mph ace down the middle along the way. A cracking atmosphere at a nearly full Arthur Ashe Stadium is set to pop.

The winner of tonight’s match will advance to a semi-final clash with Daniil Medvedev, the 25-year-old Russian who booked a spot in the last four at Flushing Meadows for a third consecutive year by stopping the surprise run of Dutch qualifier Botic van de Zandschulp by a 6-3, 6-0, 4-6, 7-5 scoreline.

The players are nearly finished with their warm-up and we should be under way momentarily.

Hello and welcome to Flushing Meadows for tonight’s second men’s quarter-final between Félix Auger-Aliassime and Carlos Alcaraz. We’ve got an absolute cracker on hand tonight in the Arthur Ashe Stadium nightcap as the 18-year-old Alcaraz, already the youngest US Open men’s quarter-finalist in the Open era, bids to become the youngest men’s semi-finalist at this event since Dennis Ralston at the 1960 US Championships.

Alcaraz and British qualifier Emma Raducanu give the US Open an 18-year-old in both the men’s and women’s quarter-finals for the first time since 1988, when men’s semi-finalist Andre Agassi and women’s finalist Gabriela Sabatini went that far.

He’s in tonight with the 12th-seeded Félix Auger-Aliassime, who is bidding to become the first Canadian semi-finalist in this tournament’s 140-year history.

The players should be coming out for their warm-up shortly and we’ll pick it up with game-by-game coverage from there!

Bryan will be here shortly. In the meantime here’s the big news from today’s day session: Leylah Fernandez’s stunning win over No 5 seed Elina Svitolina to reach the last four of the women’s singles.