US, Israel Reaffirm Pressure on Iran to Stop ‘Nuclear Enrichment’ 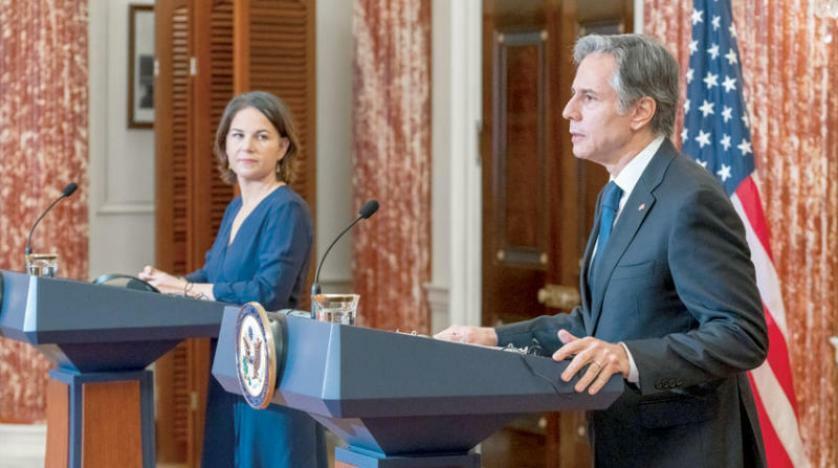 The United States and Israel affirmed that the challenges posed by Iran in the region are going to be confronted, as Washington emphasized commitment to the "security and safety of Israel".

The US position came as major countries are meeting in Vienna for indirect negotiations between Iran and the United States, aimed at saving the 2015 nuclear agreement.

The State Department said in a statement that US Secretary of State Anthony Blinken and his Israeli counterpart, Yair Lapid, discussed, in a phone call, Wednesday evening, a set of regional and global issues, including "the challenges posed by Iran."

The two sides also discussed "the dangers of Russian aggression against Ukraine," noting that "Blinken reiterated the administration's firm commitment to Israel's security."

In a tweet, Lapid said he discussed the regional and global challenges with Blinken, and the need to “pressure Iran to halt its nuclear weapons race.”

Lapid and Blinken did not mention the exact nature of the "pressure on Iran."

The call came a few hours after Axios reported that US National Security Adviser Jake Sullivan, during a visit to Jerusalem last month, informed Israeli officials that the “snapback” mechanism in the nuclear agreement, was an effective way to "deter Iran from enriching weapons-grade uranium.”

Sullivan said he was very concerned that the Iranians felt they were getting closer to the possibility of breaking out toward a nuclear weapon. The sanctions would be particularly devastating to Iran's economy because all UN members would be bound to comply, the report said.

In turn, Israeli Foreign Ministry officials told Sullivan they believe the United States and the European troika (France, Germany, and Britain) should move forward with the “snapback” mechanism if the Vienna negotiations yield nothing, regardless of Iran’s enrichment levels and uranium production.

“Only the UK had shown any openness to the snapback idea so far,” Israeli officials say after Iran abandoned all of its commitments under the agreement and increased its uranium enrichment from less than 4 percent to 60 percent, a "technical short" step from weapons levels seen by some observers, as international inspectors face challenges in monitoring progress.

Israel strongly opposed talks aimed at restoring the agreement; but in recent weeks, officials have indicated a shift toward "accepting an agreement in some form."

State Department spokesperson Ned Price said there had been “some modest progress” in recent days.

Meanwhile, several Republican lawmakers accused the Biden administration of opposing a provision in the Department of Defense budget law for 2022, which requires the administration to provide Congress with "detailed reports" on Iran's military capabilities, funds, and related activities.

According to the law's provisions, it requires a "detailed description" of Iran's military progress, all arms sales and transfers to and from Iran, all missile launches by Iran, and changes in the capabilities of Iranian-backed military groups.

The American Free Beacon website quoted foreign policy leaders of the Republican Party in Congress, criticizing the Biden administration's decision not to comply with the legal mandate, by providing details to Congress about Iran's capabilities, and how easing sanctions on Iran would not enhance the regime's ability to launch terrorist attacks.

“Biden’s administration does not want Congress to know how much money Iran's terrorist allies are getting because of sanctions relief, while negotiations continue with Tehran on a new nuclear deal,” Republicans say.

The "strict reporting" requirement in the National Defense Authorization Act, is the first of its kind and will compel the administration to "provide details about how sanctions relief will support Tehran's terrorist allies," and strengthen the capabilities of the militias, referring to Lebanon's Hezbollah, the Houthis in Yemen, and the Hamas movement.