US begins Covid-19 vaccinations as Europe gets new lockdowns

By Peter HUTCHISON with AFP bureaus

New York (AFP) - The United States kicked off a mass vaccination drive Monday hoping to turn the tide on the world's biggest coronavirus outbreak, as the nation's death toll neared a staggering 300,000.

The landmark moment coincided with several European countries announcing new lockdowns amid spiraling infections, highlighting how the road to ending the global pandemic is a still a long one.

"It didn't feel any different from taking any other vaccine," said Lindsay, a critical care nurse at the Long Island Jewish Medical Center, imploring all Americans to "to do our part" by getting vaccinated.

"I hope this marks the beginning of the end of the very painful time in our history," she added.

The vaccinations come at one of the darkest phases of the pandemic, with cases in the US and many other countries soaring, and health experts still struggling against vaccine skepticism, lockdown fatigue and uneven adherence to safety rules.

On Monday, the Netherlands was preparing to enter its strictest lockdown since the pandemic began, Britain announced new restrictions on London and Turkey said it would go into a four-day lockdown over the New Year holidays.

The US, which has the world's highest death toll and the largest number of reported cases, at 16.2 million -- including more than 1.5 million new infection in just the past week -- passed 299,800 deaths.

Early vaccinations also took place in Pennsylvania and Ohio, while Canada administered its first dose to a caregiver in Montreal.

Delivery trucks with special refrigeration equipment are rolling out across America, as part of a public-private plan to ship millions of doses of the newly approved Pfizer-BioNtech vaccine to vulnerable Americans.

Courier services FedEx and UPS have deployed fleets of trucks and planes to carry their precious cargo -- sometimes under armed guard -- to all 50 states, where health care workers and nursing-home residents are first in line.

An initial 2.9 million doses are set to be delivered to 636 sites around the country by Wednesday, with officials saying 20 million Americans could receive the two-shot regimen by year end, and 100 million by March.

Doses are being shipped in boxes containing dry ice that can keep supplies at -70 degrees Celsius (-94 degrees Fahrenheit), the frigid temperature needed to preserve the drug.

Trials have shown the vaccine to be 95 percent effective, and Americans are being told it is safe unless they have an allergy to any of the drug's components.

But experts face a battle to convince enough Americas to take the vaccine to make it effective in a country where the anti-vaccine movement is strong.

"My biggest concern is the level of hesitancy in the country.I really hope we are going to be able to change that," Moncef Slaoui, head of the government's vaccine rollout program Operation Warp Speed, told CBS.

Worldwide, there have been at least 1.6 million deaths since the outbreak emerged in China last December, and 71.6 million cases overall.

Britain's health minister announced that London will move into the highest level of restrictions from Wednesday with theatres, pubs, restaurants, and other hospitality venues forced to close except for takeaway food.

Matt Hancock said scientists had identified a "new variant" of the virus in the south of England that may be causing infections to spread faster, though he added it was "highly unlikely to fail to respond to a vaccine."

Dutch Prime Minister Mark Rutte said schools and all non-essential shops would shut from Tuesday for five weeks over the Christmas period, while Turkish President Recep Tayyip Erdogan announced a nationwide curfew from December 31 to January 4.

The Czech government said it would re-impose an overnight curfew and shut restaurants and bars for Christmas, while Germany will enter a partial lockdown from Wednesday, with non-essential shops and schools to close.

Even as US officials welcomed the unprecedented vaccine effort, they cautioned people not to grow lax in observing precautions.

"It's going to take months before the vaccine hits critical mass.So, this is the light at the end of the tunnel, but it's a long tunnel," said Governor Andrew Cuomo of New York state, where 35,000 people have succumbed to Covid-19. 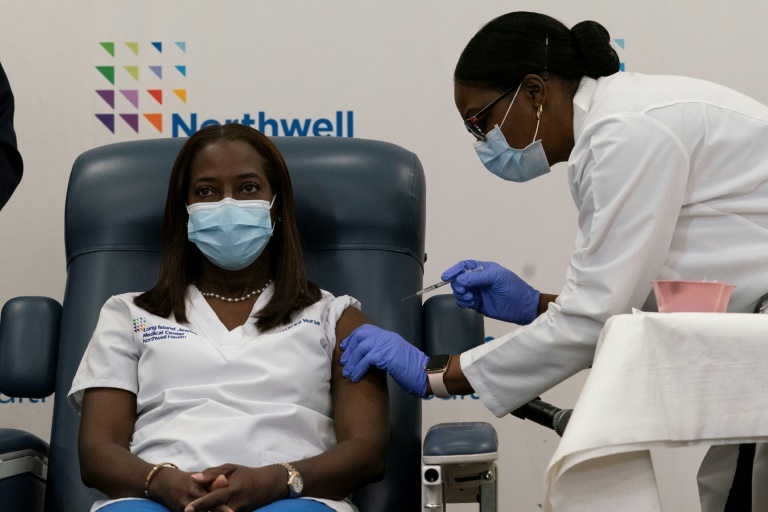 AFP
US begins Covid-19 vaccinations as its death toll passes 300,000