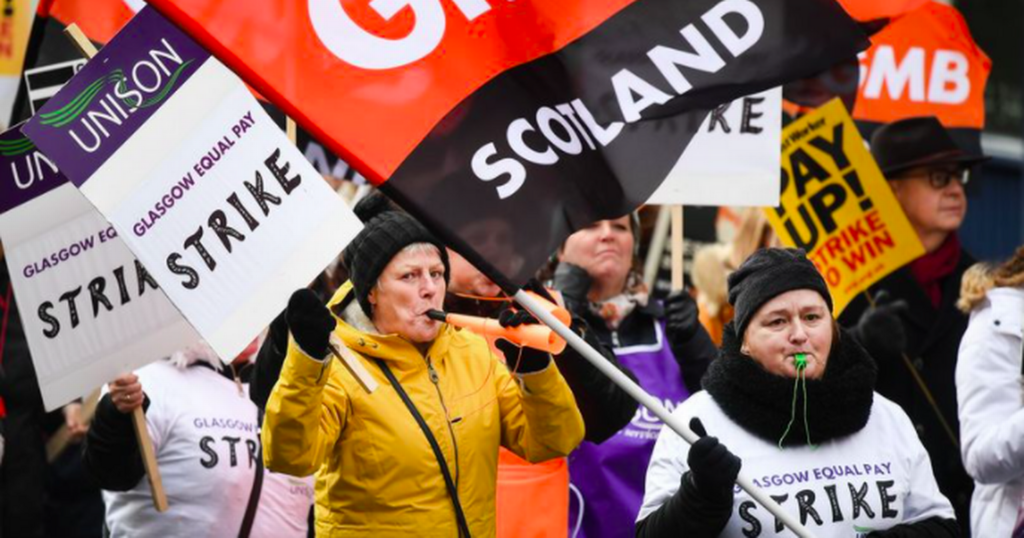 Unions have accused Glasgow City Council of going back on a promise to settle a £500million equal pay dispute.

The city council could now face further action as trade unions are to consult their members on a strike accusing the local authority of delaying the process.

They have argued this could see thousands of female workers excluded from future pay-outs.

Council lawyers have been meeting with the claimant's legal team from Action4Equality, UNISON, GMB and UNITE to discuss the outstanding equal pay claims.

The council has estimated that the new pay and grading system to eliminate gender pay discrimination will not be implemented until 2024 due to the volume of work involved around job evaluation and creating the new system.

Union bosses said the council has stated that it is willing to discuss payments for those who have had nothing so far, but only for a very small number of the jobs that were paid out under the deal reached in 2019.

If the council is seeking to adopt this approach for claims outstanding up to March 2018, then the trade unions assume that this is also what the council proposes to do for claims after March 2018.

Sylvia Haughney, UNISON branch officer, said: "'Our members recognise this as a cynical ploy to divide the women of Glasgow, we won't be fooled. We were paid out in 2019 because our pay was unequal, nothing has changed since then, its still unequal, so we are still due the balance as promised.

"The council claim they need more data from the claimants. What data are the council saying they need? They had the correct data in 2019 to sort this, we are still the same people, in the same jobs, in the same pay scheme. The council has the right data now and it knows it, its time to pay up as promised.

"We will now consult with those members we intend to ask to participate in strike action."

GMB Branch Secretary Shona Thomson commented: “Glasgow City Council want to exclude over 20% of job titles that were previously agreed, from any future agreement, providing no justification or explanation. This would mean thousands of women who work under pay discrimination every day will receive nothing, adding insult to injury.

We will not agree to the exclusion of our friends and colleagues. We know that when we stand united and take action, we can achieve anything, we done it last time and we’ll do it again.”

" We will now consult with those members we intend to ask to participate in strike action."

Wendy Dunsmore, Industrial Officer at Unite, added: "Glasgow City Council’s delays in payments to claimants alongside excluding thousands of workers who are predominantly female from future payments is deceitful and inflammatory. We all need to be clear about the situation here, which is that thousands of workers are awaiting payments owed to them for being wrongfully treated.

"The Council are dragging their feet over the payments settled up to March 2018, while moving the goalposts over the claims made after this period.

It’s infuriating the workers and that’s why Unite is consulting our members over this unacceptable situation. There needs to be further payments to all those who have outstanding claims. Many of these workers don’t have the time to wait months and years for their money. Choices are literally being made every day by families over the cost of fuel, energy and living.”

The equal pay claims arose due to the implementation of the Workforce Pay and Benefits Review (WPBR) scheme in 2006.

The dispute came to a head in October 2018, when over 8,000 workers across the city took strike action in order to force the council to engage in meaningful negotiations, settle the claims, and deliver pay justice for the workforce.

It comes after watchdogs at the Accounts Commission praised Scotland's largest local authority for its handling of the dispute, which will cost the council £505 million to settle.

A report examining how the council dealt with the equal pay claims said it had "successfully delivered a challenging and complicated project within a relatively short period of time".

A spokesman for Glasgow City Council branded the claims "categorically untrue," adding: In 2019, the council settled a substantial number of historic equal pay claims, covering a period from 1 January 2007 to 31 March 2018. Over recent weeks, it has been in discussions with claimants’ representatives about a range of newer claims that were not dealt with at that time and which the 2019 settlement expressly did not cover.

“The council has been clear that it is ready to make in-principle offers in relation to a sizeable number of posts, but representatives have told officers they are not prepared to engage with the council to make those offers to staff.

“And, while representatives have indicated they will withdraw a number of claims which they agree have no merit, they have also declined to show the council data they say have - and had previously argued justifies others.

“The council remains ready and willing to make in-principle offers and to carefully consider any evidence relating to other posts, if representatives are prepared to provide it.”