Brits can look forward to sweltering heat with 25C highs over the weekend but there are also warnings of thunderstorms.

After Wednesday, which was a rainy day for much of the country, the showers will gradually move away over the next couple of days and make way for a high pressure system coming in from North Africa.

The highest temperatures over the next few days will be in the south with it reaching 20C today and a degree or two more on Friday before peaking at 25C over the weekend.

BBC weather forecaster Nick Miller says that there will be rain for many parts of the country today but not as much as Wednesday.

"Rain reached some of the driest southern areas of the UK on Wednesday, it wasn’t very much but it was more than has fallen in quite some time," he said.

"That system is now out of the way and some of the southern areas are having a mainly dry day on Thursday whereas northern areas close to the weather front, there will be more rain particularly across Scotland and especially in the west.

"There will be a lot of dry weather to begin the day on a cooler start with the temperatures quite widely into single figures, a little bit lower in some rural spots, but there will be a lot of sunshine first thing and parts will see cloud increasing but not everywhere will get rain from that cloud.

"There will be a few showers popping up in Northern Ireland during the morning and lasting into the afternoon. North west Scotland turning wetter, more widely across western parts of Scotland. Later in the day you’ll see some rain, some of that pushing further east during the afternoon.

"The odd shower for Wales and south west England, and across Wales and England more cloud in the afternoon compared with the morning and a warmer day in the east and south eastern part of the country where it stays dry with some sunny spells compared with Wednesday’s rain."

Heading into the weekend and the high pressure system will be in charge with mainly dry weather and temperatures in the mid-20Cs but there is also a warning of thunderstorms.

Mr Miller continued: "It will be pleasantly warm especially when you get to see some sunshine, high pressure is close by but that is not the whole story.

"Later Saturday, Saturday night, first thing Sunday there are some showers, some thunderstorms pushing up from the south and into parts of England and Wales, some of those come back Sunday night and into Monday morning."

UK forecast for the next 5 days

Showery in the northwest, drier elsewhere.

Most areas dry with sunny spells and cloud bubbling up through the day, probably sunniest in the southeast. Northern Ireland and much of Scotland breezy and cloudier with some showery rain at times.

Dry and fine in south with hazy sunshine for most. Very warm in southeast. Cloudier in north with occasional rain across northern and western Scotland, though eastern areas staying dry.

Outlook for Saturday to Monday:

Mainly fine and warm, locally very warm, with sunny spells. A few showers in the far north Saturday, then showers or rain, some heavy, in the south Sunday or Monday. 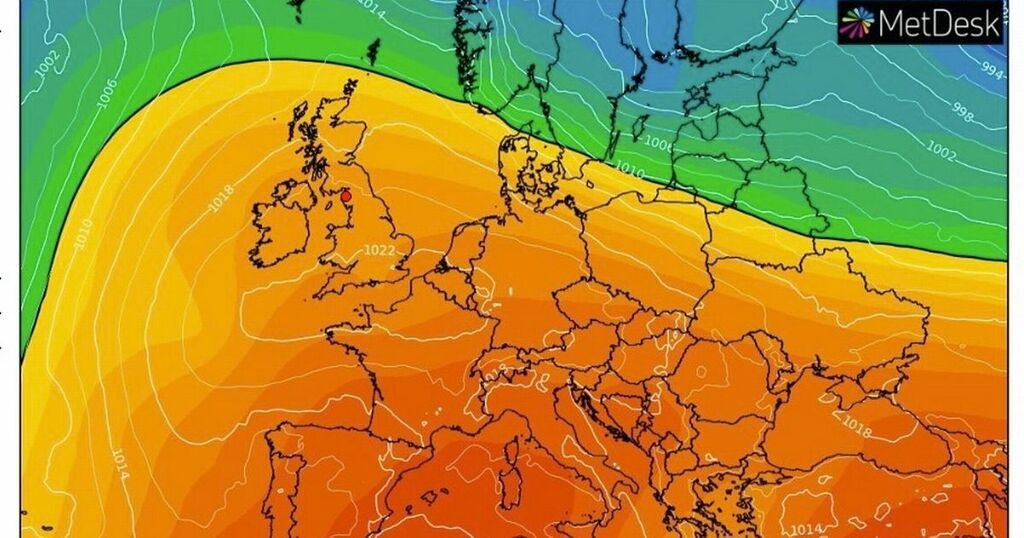 UK weather forecaster: Washout with heavy rain before blistering weekend with 25C highs
A low pressure is set to bring heavy rain and wind today before temperatures rise going into the weekend which…

Daily Mirror
One subscription that gives you access to news from hundreds of sites
UK weather forecast: Blistering weekend set to be hottest days of year with 25C highs

New Zealand grandmother creates her own electric car for $24,000