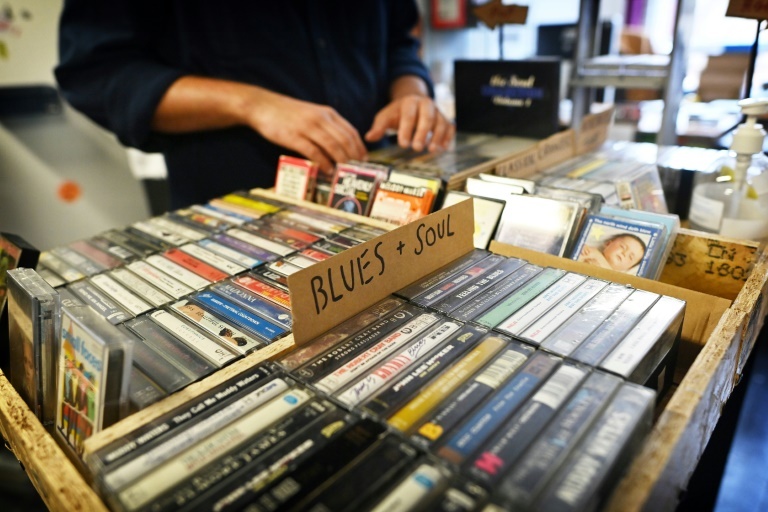 Manchester (United Kingdom) (AFP) - Tucked away in a corner of the top floor of an indoor market in Manchester, northwest England, is the last shop in Britain dedicated to selling cassettes.

Mars Tapes crams around 1,000 cassettes, a Coca-Cola radio, boom boxes, vintage editions of the Walkman cassette player and other tape-related accessories in a compact retail unit smaller than one of the city's tram carriages.

Hits by stars including Elvis Presley, Florence and the Machine, and Lewis Capaldi line its shelves, as classic tracks provide a musical backdrop, taking customers back in time.

The shop was set up in 2019 by an eclectic group of people united by a love of music, explained co-founder Giorgio Carbone.

Italian Carbone, 30, and 28-year-old journalist and musician Alex Tadros supported the idea and merged the store into the group's record label.

The shop is tapping into a nostalgic trend in cultural consumption accentuated by the coronavirus pandemic.

People have turned to reading books and watching classic films and television series to stave off boredom and find escapism during lockdowns.

Sales of vinyl -- the pocket-sized plastic cassettes' predecessor in music distribution -- jumped to their highest level since the 1990s in Britain last year.

Modern artists such as Lady Gaga, Dua Lipa and Selena Gomez have released tapes recently, pushing cassette sales in Britain up to around 157,000 in 2020 -- the highest figure since 2003.

Mass production of cassettes began in the 1960s, with 2.4 million tape players produced and sold worldwide by 86 different manufacturers by 1968.

But their UK heyday ended with the explosion of CD sales in the 1980s and 1990s, leaving some music fans pining for a bygone era.

Warehouse manager Mark Williams, 38, browsed Mars Tapes' collection with an analogue camera hanging from his neck and said his interest originated in "nostalgia more than anything".

"I'm a child of the 80s and 90s -- I grew up with cassettes.It's tangible, something you physically own, not just downloaded data," he told AFP.

But the boom in cassette consumption is not confined to an older generation seeking to relive their youth.

"People like the idea of having something physical.Lately especially, with coronavirus and lockdown, it's a way of appreciating the music more," said Carbone.

"There's a lot of work behind a cassette.It's something we lost with time, to appreciate what we have and listen to something more than once and not just skip it."

Care assistant Jane Fielding, 22, occasionally listens to cassettes on her Walkman."I like the simplicity -- there's no distractions, no notifications on my phone," she said.

Cassettes are cheaper and easier to produce than vinyl and Mars Tapes limits its runs depending on the genre and band to keep costs down, Carbone explained.

The store acquires stock from websites like eBay, individual donations and record labels including Universal, while Carbone, Tadros and Regueira's record label supports local indie bands by purchasing their tapes.

"In Italy, there's not that music culture.It's good to be here because there's a lot of people passionate about cassettes," said Carbone.

"We thought cassettes was the most affordable way of making records and helping bands."

And socially-conscious listeners want independent artists to earn a good living from their work instead of filling the coffers of streaming giants like Spotify and Apple Music.

Streaming services accounted for 80 percent of UK music consumption in 2020 but have been criticised for short-changing musicians.

"You own the music and support the artist, big and small," Carbone added.

Carbone acknowledged it seemed "crazy" to occupy a bigger unit after the UK's 2021 winter lockdown and the economic damage it wrought.

He thinks cassettes will remain a "niche" interest but reckons demand will remain steady.

"There's something about the sounds of cassettes that's just different," he said.

"It sounds better on cassettes, a lot different than listening on the radio -- it's another level," he said.