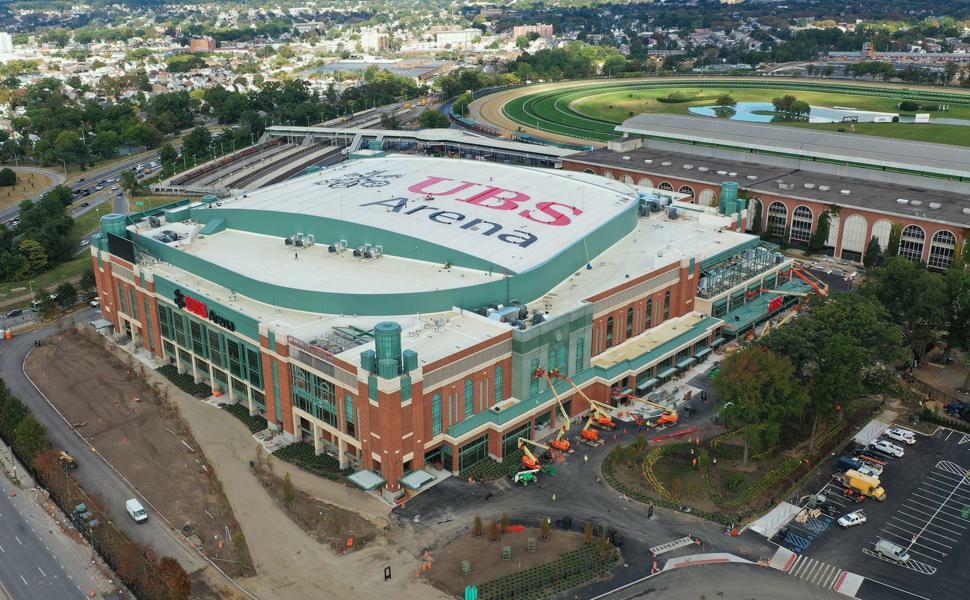 The Islanders’ second straight run to the NHL semifinals last spring was as euphoric as it was bittersweet. Nassau Coliseum, the last great old-fashioned hockey barn, got the sendoff it deserved in front of sellout crowds nine months after it seemed the last chance to give the arena a raucous goodbye was relegated to a bubble in Edmonton.

But the run — capped with a wild Game 6 victory over the Lightning in which fans celebrated by chucking beer, food and shoes on to the ice following Anthony Beauvillier’s game-winning overtime goal — also served as a reminder of what could be lost with the second (and final) shutting of the Coliseum’s doors.

As flawed and outdated as the Coliseum was almost from the moment it opened in 1972, it’s also an indelible part of the Island experience, one which reflects and in a strange way honors the grittiness, resourcefulness and boisterousness of those who reside on Long Island.

The failed Barclays Center experiment served as a reminder of how difficult it is to provide the Islanders with a much-needed arena upgrade while retaining much of the Island-specific charms of the Coliseum. But with UBS Arena — located on the Queens/Nassau border and constructed on 43 acres at Belmont Park — the Islanders are confident they’ve found the delicate balance.

“I love the intimacy — moving it from Nassau Coliseum (to) the new arena,” Islanders co-owner Jon Ledecky said after a UBS Arena summit and before a tour of the building Sept. 30. “I talked to (Capitals superstar) Alex Ovechkin. He said that Nassau Coliseum was his favorite building in the league because of its intimacy. Could actually hear the fans individually yelling at him. We tried through great efforts to replicate that at UBS/Belmont.

“At the same time, no more 30-minute waits for bathrooms — more bathrooms than any facility in the NHL. And no longer waiting 20 minutes for a cold hot dog. We’re going to have the best food in the NHL.”

Fans are going to have to wait until Nov. 20 — when the Islanders return from a season-opening 13-game road trip to play their home opener against the Flames, the same franchise the Islanders opposed in the Nassau Coliseum opener in October 1972 — to sample the food and give the bathrooms a test run. But simply arriving at UBS Arena provides evidence the Islanders have a new home that will feel familiar to those who never felt comfortable with Barclays Center.

Unlike Barclays Center, UBS Arena is located on Long Island proper — right on the Nassau/Queens border — and, like most major Island landmarks, situated off a major highway. In the couple seconds it takes to navigate the tiny “ramp” off Exit 24B of the Cross Island Parkway, UBS Arena suddenly appears, the metropolitan version of a casino appearing seemingly out of nowhere in the rolling hills of the countryside.

The short ride along Hempstead Turnpike to the parking lots are filled with the gas stations, fast food restaurants and other landmarks of suburbia that dotted Hempstead Turnpike across from the Coliseum about 15 miles further east. (There’s also a stable supplies shop, because, well, it’s across the street from Belmont Park) There will be 5,500 parking spots at UBS, just shy of the 5,800 at the Coliseum but more than enough for the pregame tailgating that was such a staple of the Coliseum experience.

The inside of the arena will feel familiar — to a point. With a roof just three feet higher than the roof at Nassau Coliseum, the noise should be contained in a similarly ear-splitting fashion. The interiors will pay homage to the metro New York area and each of the many bathroom bays will feature old school New York signage.

There’s been a familial feel throughout the construction process. As Ledecky — described at the summit by NHL commissioner Gary Bettman as the most “…active ownership representative around games — you have your own cheering section” — prepared for the tour last week, he shook hands and took pictures with construction workers. Afterwards, he ate hamburgers provided by a local caterer and pronounced them the best burgers he’d ever eaten.

As Tim Leiweke — the CEO of Oak View Group, which partnered with the Islanders and Sterling Project Development, the real estate arm operated by the Wilpon family, in building the arena — concluded his tour, he exchanged hugs with Islanders legend John Tonelli, a four-time Cup winner whose number was retired in February 2020.

But make no mistake: As comfortable as Ledecky and co-owner Scott Malkin want fans to feel — Malkin said “…this arena’s about every fan, this is not about siloing off and fancy people (who) pay more for their seats get a different experience — this is a shared experience, the Islanders are a community team” — they didn’t oversee the construction of a $1.5 billion arena in order to create Nassau Coliseum 2.0.

While there was plenty of talk Sept. 30 about the Islanders one day hoisting the long-awaited fifth Stanley Cup at UBS Arena and the building hosting an NHL All-Star Game and draft, the facility was also built with the idea it would compete with the area’s three entrenched arenas — Madison Square Garden, Barclays Center and Prudential Center — for the biggest concerts.

Leiweke’s co-founder with the Oak View Group is Irving Azoff, who is recognized as the most powerful figure in music. The suburban setting of UBS Arena allowed for not only the construction of spacious backstage areas for artists — enough dressing rooms, as Leiweke said, to cater to bands filled with members who don’t like one another — but also room for 16 semi trucks, which will allow shows to be produced in a quicker and easier fashion and at up to $250,000 cheaper than a similar show at the area’s competing arenas.

“Tim talked about the intimacy of the bowl and the environment being like Nassau — that’s only partially true, there’s nothing about the rest of this building that will remind you of Nassau,” Bettman said to laughs during the summit.

That will prove to be especially true regarding the construction of the arena — a process which, in retrospect, began in 2012, when late Islanders owner Charles Wang, fresh off a bruising and ill-fated decade-long attempt to get the Lighthouse Project built in conjunction with Nassau County, agreed to move the team to Barclays Center and signed a 25-year lease beginning with the 2015-16 season.

“Two choices if you’re the owner of the Islanders: If you’re Charles, you could move the team somewhere else,” Ledecky said. “Or you could figure out an alternative that would be better for the fans in the short-term.”

Prior to the 2014-15 season — the Islanders’ first last season at the Coliseum — Wang sold a stake in the franchise to Ledecky and Malkin with the agreement they’d become the majority owners following the 2016-17 season.

Ledecky and Malkin — the latter of whom described himself as “the sticks and bricks guy in the background” at the summit, which was believed to be just the third time he’s spoken in public since teaming up with Ledecky to buy the Islanders — navigated themselves around Nassau County’s Byzantine political system by submitting an RFP to Empire State Development for the land at Belmont.

In December 2017 — a month before either the Islanders or Barclays could opt out of the lease — Empire State Development announced the Islanders submitted the winning bid and then-New York governor Andrew Cuomo appeared at Belmont to declare the Islanders were back where they belonged. In February 2020, just before the pandemic hit and with the Islanders playing full-time again at a renovated Coliseum, Bettman praised Cuomo’s “persistence” in helping to get UBS Arena built.

As much as the architects of UBS Arena want to evoke the best of the Coliseum experience at the new building, there’s a desire — as undeniable as it is unspoken — to finally leave the old barn in the past.

The Coliseum could have closed out its era as a major sports venue with a handful of Islanders games this October and November, but instead the team will embark upon the second-longest road trip in NHL history as the final touches are applied to UBS Arena. It’s quite the contrast to Feb. 11, 1972, when the ABA’s New York Nets opened the Coliseum even though the building’s parking lot, exhibition hall, escalators and interior offices were all unfinished.

And what’s a few extra weeks when it comes to opening an arena hosting a potential Stanley Cup contender — a combination that was borderline impossible to believe for most of the past 35 years?

“Life’s a journey and sports teams go through evolutions,” Ledecky said. “And this is our evolution.”