U.S. Rep. Mayra Flores, R-Los Indios, said Saturday that she fired a former staffer after he was accused of sexual harassment, though her campaign later said the congresswoman misspoke.

Aron Peña, who served as district director for the newest Texas Republican in Congress, left the campaign after far-right website Current Revolt and Texas Public Radio reported on sexual harassment allegations against him spanning decades. The Texas Tribune also reported earlier this month that the Texas Republican Party had investigated Peña over sexual harassment allegations and that he was accused of touching and kissing an intern without her consent.

Peña dismissed the allegations as politically motivated, but Flores’ campaign called the accusations “serious and not a reflection of our values” in response to the Tribune’s reporting.

In response to a question Saturday at The Texas Tribune Festival on workplace sexual harassment in politics, Flores said Peña had been fired.

“First thing we were made notified, he was gone,” Flores said. “We will not tolerate any of that behavior.”

Flores spokesperson Daniel Bucheli told the Tribune after the event, “The congresswoman misspoke this morning,” adding that Peña had “resigned from our office.”

Bucheli's comment was in line with a statement about Peña that he had previously given to the Tribune. “We addressed the allegations as soon as we were made aware, and Mr. Peña resigned,” he said.

Peña did not immediately respond to a request for comment on Flores’ Saturday remarks.

Speaking of sexual harassers, Flores said, “We fire them. My opponent hires them” — an apparent dig at U.S. Rep. Vicente Gonzalez, Flores’ opponent in her competitive race for the 34th Congressional Sistrict. Gonzalez came under fire after his campaign paid for advertising on a Texas political blog that employed racist and sexist language to describe Flores.

Gonzalez denied knowing about the blog content at the time and vowed not to give it any more campaign money. Flores has since insisted that Gonzalez hired the blogger to sexually harass her with racist tropes.

Flores was speaking at a panel with U.S. Rep. Tony Gonzales, R-San Antonio, and Texas Monthly editor Jack Herrera on Republican gains in the traditionally Democratic stronghold of South Texas. National Republicans are zeroing in on the region as rich fodder for new GOP seats, tapping into the area’s economic concerns, conservative social values and proximity to the border.

Disclosure: Texas Monthly has been a financial supporter of The Texas Tribune, a nonprofit, nonpartisan news organization that is funded in part by donations from members, foundations and corporate sponsors. Financial supporters play no role in the Tribune’s journalism. Find a complete list of them here.

The Texas Tribune Festival is here! Happening Sept. 22-24 in downtown Austin, this year’s TribFest features more than 25 virtual conversations with guests like Eric Adams, Pete Souza, Jason Kander and many others. After they air for ticket holders, anyone can watch these events at the Tribune’s Festival news page. Catch up on the latest news and free sessions from TribFest.

Clarification, Sept. 24, 2022: This story has been updated to include comments from Flores campaign spokesperson Daniel Bucheli, who said Flores misspoke when she said she fired her former district director, Aron Peña, after sexual harassment allegations surfaced against him. 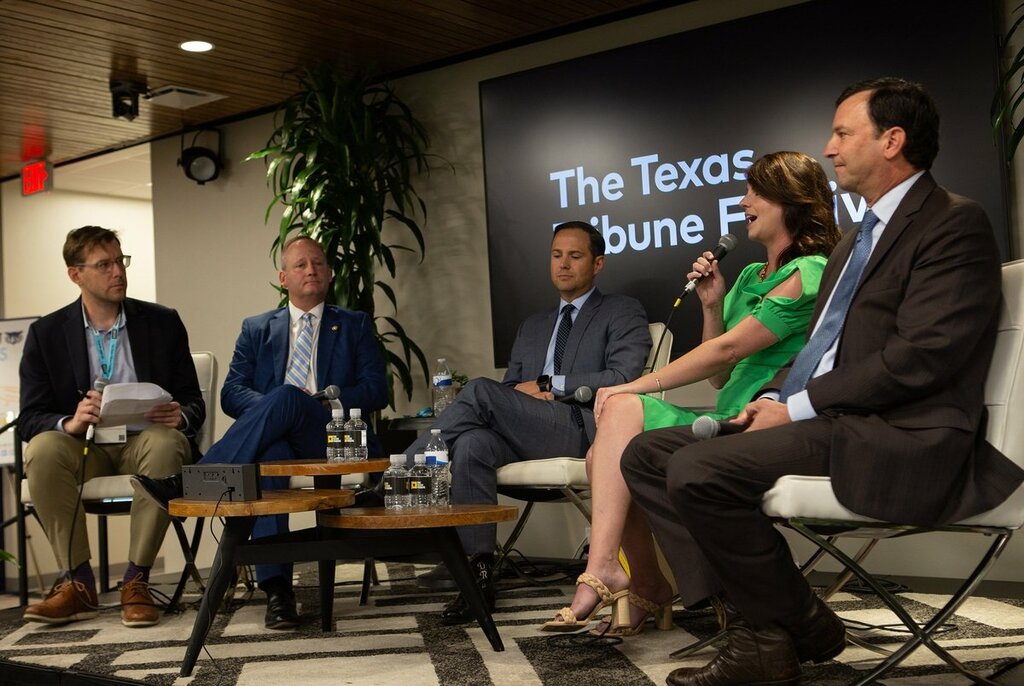 Ahead of the 2023 session, Texas lawmakers previewed their objectives. Here are five things you need to know.
Texas lawmakers on both sides of the aisle talked schools, abortion and guns in advance of next year’s session in a range of panels at The Texas Tribune Festival.

The Texas Tribune
From analysis to the latest developments in health, read the most diverse news in one place.
Liz Cheney says she will do whatever it takes to keep Donald Trump from the White House, even if it means leaving the GOP

The top Republican on the House Jan. 6 committee urged voters to prioritize preserving democracy over policy differences during this year’s midterms at The Texas Tribune Festival.

The city’s health department found dioxins in soil samples along the fence line of a Union Pacific rail yard. Mayor Sylvester Turner said during the 2022 Texas Tribune Festival that plans to clean up the contamination should now include relocating residents.

The Texas Tribune
One place to find news on any topic, from hundreds of sites.
Republican Texas Congressman Dan Crenshaw takes aim at his own party’s “woke right” for stoking division

In an interview at The Texas Tribune Festival, Crenshaw harshly criticized extremists at both ends of the political spectrum.