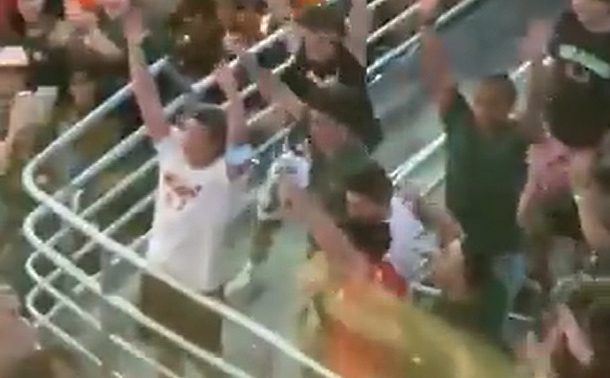 We’re used to weird things happening when Appalachian State plays bigger programs (avert your eyes, Michigan boosters), but what happened at Miami’s Hard Rock Stadium during the first quarter of the Mountaineers’ game against the Miami Hurricanes has to be unpresented.

As the video shows, a cat had somehow made its way to the top of the stadium. The poor animal was hanging on for dear life and eventually fell, but a group of Miami fans were aware, and were right on the spot to catch the cat with an American flag.

Well this may be the craziest thing I’ve seen at a college football game #HardRockCat pic.twitter.com/qfQgma23Xm

Per the Miami Herald, the good Samaritan in charge was Craig Cromer, a facilities manager at the University of Miami. He’s had season tickets for seven years with his wife, Kimberly, and the Cromers hang an American flag on the railing in front of their seats.

Their rescue mission to catch a stray cat as it fell from the upper deck, Kimberly said, is “probably the strangest thing that’s happened.”

Once the Cromers realized what was happening, they sprung into action. Craig ripped his flag free from his zip-ties, and he and his wife stretched it out to create a landing pad for the terrified cat.

They stood there for about two or three minutes while, Craig estimated, while the cat peed on the fans below.

Eventually, the cat lost its grip and tumbled down toward the suite level. The Craigs’ flag did just enough to break the fall and let a group of students in the section below grab it as it fell to the ground.

The entire corner of the stadium in Miami Gardens, right by Miami’s tunnel, erupted into cheers as one student raised the cat into the air like it was Simba from “The Lion King.” Joe Zagacki, whose booth was situated right by the action, provided play-by-play for all of South Florida on WQAM.

Unquestionably, his best catch. Per the Herald, the cat’s whereabouts are unknown, but at least it survived the trip.