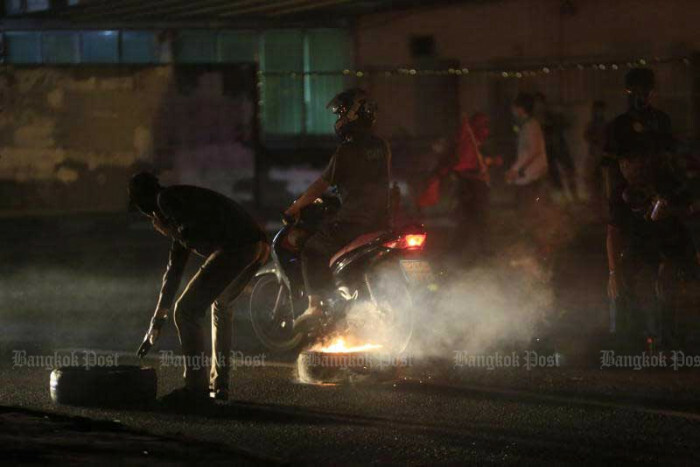 Two political groups have sent observers to a rally against Prime Minister Prayut Chan-o-cha at Din Daeng junction on Sunday after some of the largest mass arrests by police a night before.

The United Front of Thammasat and Demonstration, together with the Thalufah group, on Sunday announced the decision to post witnesses at the rally by young demonstrators in Din Daeng that evening.

The decision was welcomed by protesters from the Thalugaz group as they said they should not be left to fight alone.

Protesters, most of them on motorcycles, started gathering near the intersection on Sunday. In the past, violent incidents have taken place after dark.

The move to send observers followed mass arrests by police on Saturday night after protesters ignored a warning to end the raucous rally.

Accounts of the number of people apprehended by police at the scene varied.

The Metropolitan Police Burau (MPB) said 52 protesters, including two Cambodians, were arrested, while Thai Lawyers for Human Rights said 78 people were detained, including 20 who were at the rally site but not participating in the demonstration.

MPB spokesman Pol Maj Gen Piya Tawichai said all would be charged with violating the emergency decree, while the two Cambodians would be sent back to their home country.

Five riot police officers were injured in the rally on Saturday, including one seriously hurt when a firecracker hit his right eye, according to the city police.

Pol Maj Gen Piya, the MPB deputy commissioner, denied that police had kicked a young protester after chasing him onto the roof of a flat in Din Daeng, causing him to fall into the bedroom of a house nearby.

Police have arrested 509 protesters and are seeking 250 more since the rallies calling for the prime minister to step down began in July.