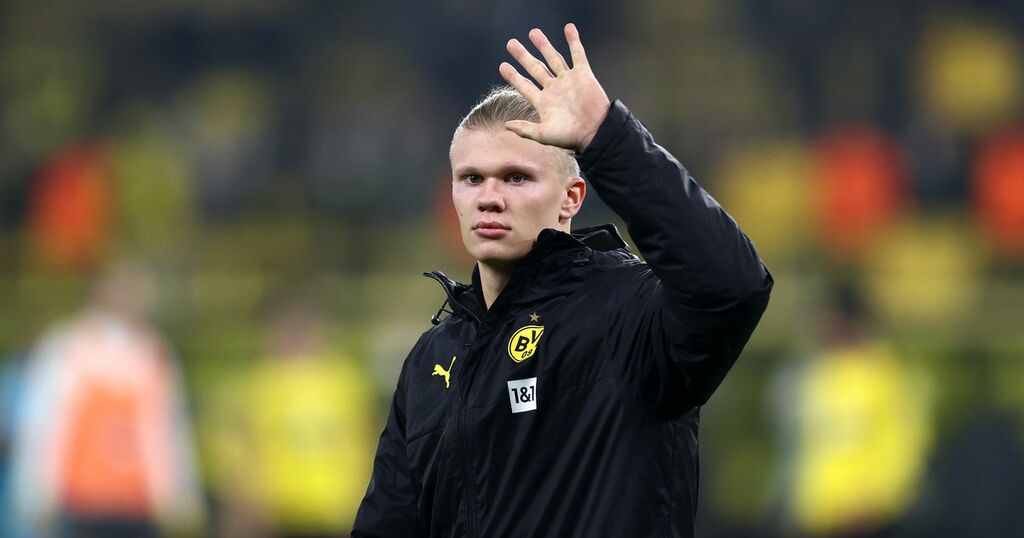 Borussia Dortmund chief executive Hans-Joachim Watzke has insisted Erling Haaland will not be sold this month.

We hope you’re sitting comfortably with those two absolutes because they do not mean speculation over whether or not the Premier League champions will sign the hottest prospect in European football is about to go away.

On Friday, The Athletic reported Haaland is City’s first-choice target for the summer market, although Real Madrid are set to provide stiff competition.

There was ominous news on that front from The Daily Star, which believes Haaland has his heart set on a move to the Santiago Bernabeu.

What the future holds for Kylian Mbappe as his Paris Saint-Germain contract ticks down could yet have a major bearing on that ambition, but it would make sense for City to have alternative targets in mind.

The Athletic said Real Sociedad’s Alexander Isak and Fiorentina’s Dusan Vlahovic fall into this bracket, so what happens if City do not manage to land the hottest show in town?

Daily gossip column entries about Haaland start to feel a bit cliched, but he has become a footballing obsession for one reason. He is ridiculously good.

Despite being restricted to 11 Bundesliga appearances this season and 10 starts before this weekend, the Norway striker had 13 goals and five assists, with only one of his goals coming from the penalty spot.

That gives Haaland an average of 1.3 goals per 90 minutes - better than Robert Lewandowski’s figure of 1.17. The Bayern Munich great’s expected goals (xG) figure per 90 is also 1.17 (as per Opta), while Haaland is over-performing his 0.87.

On Opta’s expected goals on target (xGOT) metric, which also takes into account the quality of the shot - giving more credit to attempts that pick out the corners and give goalkeepers less of a chance - Haaland’s return of 1.22 per 90 minutes is the best in the Bundesliga.

There would be concerns about how such a superstar might fit into the collective ethos Guardiola has fostered at City but, quite simply, if a player who is so obviously special is obtainable then you do all you can to make the deal happen.

Non-footballing reasons, namely the prospects of a bidding war with Madrid and the presence of motormouth super-agent Mino Raiola, are the only unattractive part of the package, but past experience shows they might be enough to nudge City in another direction.

This brings Vlahovic into the equation - the Serbia forward who has built on a breakout Serie A season in 2020/21 with further prolific returns.

Vlahovic has 16 goals in 19 top-flight appearances for Fiorentina, ramping up his goal returns despite - or perhaps because of - off-field noise surrounding his refusal to sign a new contract.

It seems the 21-year-old enjoys life in the shop window and, like Haaland, he is proving to be a lethal finisher. His 0.85 goals-per-90 record comfortably outstrips an xG per 90 of 0.55.

He’s also scored five out of five penalties, something that would obviously appeal to City, although Haaland’s one from three from the spot in the Bundesliga this season might make him more at home among Guardiola’s forwards.

Given the rate at which City are scoring without a recognised striker, it feels like any newcomer would have to come boasting a vast weight of goals.

Despite dazzling on the Euro 2020 stage with Sweden and being a player of obvious technical quality, this is not something Isak has as part of his overall offering at this point.

The 22-year-old had four goals in 16 LaLiga outings this term before suffering an injury during Saturday's 1-0 win over Celta Vigo - quite the comedown from the 17 in 34 he managed in 2020/21.

Real Sociedad - despite David SIlva’s enduring brilliance - are not title challengers and you would expect this number to increase at City. But nor are Fiorentina, and that has not stopped Vlahovic lighting things up.

There is one area where Isak comfortable has one over Haaland and Vlahovic. That dribbling prowess that caught the eye at the Euros has helped him to complete 1.75 successful dribbles per 90 in LaLiga this term. Haaland and Vlahovic both track at under one on the same metric, according to FBref.

Perhaps Isak stands out in terms of the other Guardiola absolute of defending from the front?

He averages 9.2 pressures per 90, with 5.4 in the attacking third. Those are nearly identical figures to Vlahovic, while Haaland outperforms them both with 12.6 and 8.5.

Persuading Erling to follow in the footsteps of his father and pull on a City shirt is the ideal scenario, but Vlahovic or Isak could arrive for half the price and hassle.

Out of the two, it is Fiorentina’s Serbian star who seems the most enticing prospect - the man more likely to bring an additional attacking x-factor to Guardiola’s team.