Twenty years after 9/11, one of the last U.S. Marines killed in Afghanistan comes home 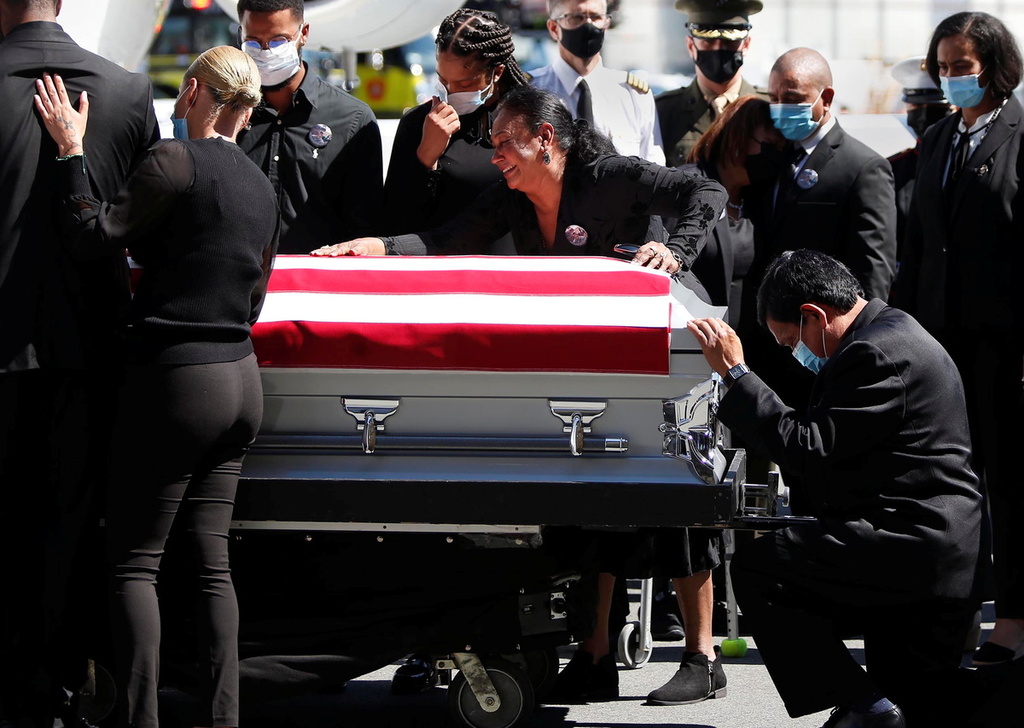 U.S. Marine Sergeant Johanny Rosario returned to her hometown in Massachusetts in a casket on Saturday, one of the last American service members killed in Afghanistan during a war set in motion exactly two decades ago by the Sept. 11, 2001 attacks.

Several hundred people gathered near the Farrah Funeral Home in Lawrence, Mass., where Rosario's remains arrived in a black hearse with a police motorcycle escort. Marines in dress uniform carried the casket into the funeral home, as veterans in the crowd, some of whom had not worn a uniform in years, snapped to attention.

"We came out because she is a hero to us," said Mary Beth Chosse, who waited for several hours with her 12-year-old son, Gavin. Chosse's older son is a Marine on active duty. "Sergeant Rosario's sacrifice and bravery should always be remembered."

Rosario, 25, was among 13 U.S. service members killed in an Aug. 26 suicide bombing outside the Hamid Karzai International Airport in Afghanistan's capital Kabul. She was helping to screen evacuees at a checkpoint at the airport's Abbey Gate when the bomb ripped through a crowd. Scores of Afghans also were killed in the attack.

About 7,100 U.S. military personnel have been killed in conflicts tied to the Sept. 11 attacks, with about 2,500 of those deaths happening in Afghanistan, according to the Costs of War project at Brown University's Watson Institute. The financial cost of those conflicts runs to nearly $6 trillion, according to the project.

Like many Americans, Sheila Arias, 41, remembers Sept. 11, 2001 in vivid detail. She was at a hair salon in Lawrence when she watched the twin towers of New York's World Trade Center collapse after al Qaeda hijackers seized control of two airplanes and crashed them into the buildings. Hijacked airplanes would also crash into the Pentagon outside Washington and a field in Shanksville, Pennsylvania.

Arias soon after enlisted in the U.S. Army, leaving a comfortable, steady job as a clerk in Lawrence's water department to join the military effort to root out al Qaeda.

"There was no question that I had to serve," Arias said. "I'm sure Johanny Rosario felt the same way."

Rosario, who was 5-years-old when the attacks occurred, would begin her service years later, when the United States was already deeply involved in Afghanistan.

Shortly after graduating from high school in 2014, she enlisted and landed with the 5th Marine Expeditionary Brigade.

Eventually she would become a supply chief, a role usually held by a more senior noncommissioned officer, according to the Marines, and volunteered to be a member of the female engagement team to interact with Afghan women, barred by local custom from talking to male strangers.

Just three months before her death, she was recognized with an award for her attention to detail and expertise in tracking and reconciling some $400,000 worth of open supply requisitions.

On Saturday, a group of her friends from Lawrence High School huddled near the steps of the funeral home. Wearing black face masks, they spoke of Rosario's desire to serve her country, take college courses and financially support her family.

One of the women, who like the others declined to give her name, cradled a framed picture of Rosario in a formal gown.

Like many residents in Lawrence, a working-class city about 30 miles (48 km) north of Boston with a strong Hispanic community, Rosario's roots extend to the Dominican Republic and Puerto Rico, said William Lantigua, a former mayor of the city who knows her family.

Rosario is survived by her mother and a younger sister.

On Saturday, Maria Ogando joined the crowd gathered to pay tribute to Rosario after driving an hour from Worcester, Massachusetts with her family. Her daughter, 9-year-old Kayla, wore a T-shirt with Rosario's full name on the back.

"She is a hero and it is very sad for me to see her pass away," Kayla said. "But I will always remember her name and what she did for our country."