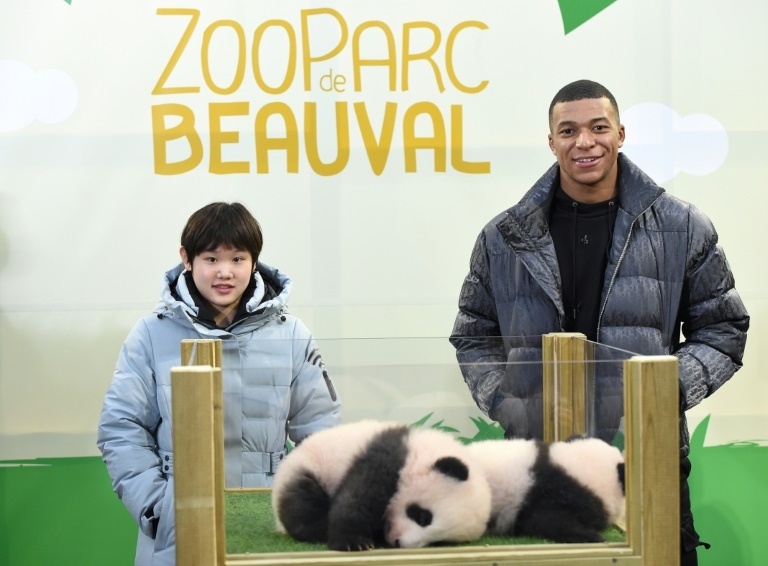 Saint-Aignan (France) (AFP) - Twin panda cubs born in a French zoo were on Thursday named Yuandudu and Huanlili at a ceremony attended by football star Kylian Mbappe, who has been named the animals' 'godfather'.

Paris Saint-Germain star and France Mbappe and Chinese Olympic diving gold medallist Zhang Jiaqi, the 'godmother', were both at the event at the Beauval zoo in Saint-Aignan, central France.

The naming of baby pandas is traditionally the prerogative of China's First Lady, but this time Peng Liyuan gave the job to the French public.

"More than 122,000 French people connected to our website to choose the names, Yuandudu and Huanlili," from a number of options, zoo director Delphine Delord said.

Mbappe and Zhang unveiled a commemorative plaque to mark the occasion.

"It's a great honour to be here 100 days after the birth of our two wonders," Mbappe told the guests at the naming ceremony.

"It's an honour but also a responsibility because, behind it, there is the project to protect this endangered species," he added.

Panda reproduction, in captivity or in the wild, is notoriously difficult as experts say few pandas get in the mood or even know what to do when they do.

Further complicating matters, the window for conception is small since female pandas are in heat only once a year for about 24-48 hours.

Only around 2,000 pandas remain alive in the wild in China, although the International Union for the Conservation of Nature (IUCN) removed them from the red list of endangered species in 2016.

The Beauval cubs, born on August 2 and both females, are the offspring of Yuan Zi and Huan Huan who were loaned to France by China a decade ago.

The panda parents also had twins back in 2017, but only one survived.

"The names Yuandudu and Huanlili are inspired by their parents' mes, Yuan Zi and Huan Huan.They evoke the wish for healthy growth for the babies and symbolise the deep ties between China and France," said Delord.

Forty-five percent of the online votes were for those names, she added.