Turtles have to contend with thousands of nets left in the sea. Now there's a new way to help them 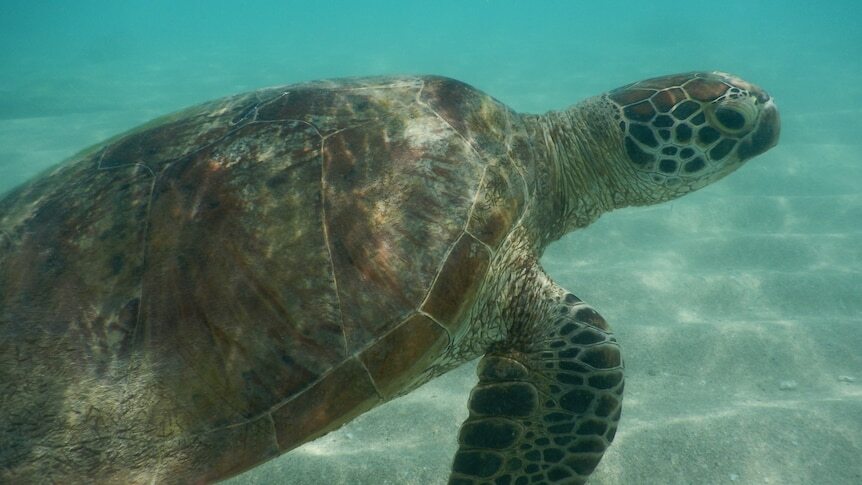 Anindilyakwa sea ranger Leyton Hastings loves his job protecting his sea country around the Groote Eylandt Archipelago in the Gulf of Carpentaria.

"I love going out on country, just looking after this place," he said.

"There's not many places like this left. It just looks so beautiful. The water's so blue."

But many patrols involve depressing work collecting marine rubbish, the main type being what he calls "ghost nets".

The ghost nets are abandoned fishing nets, mostly coming from Indonesia and other South-East Asian countries on ocean currents after being cut off or lost during bad weather and entanglement.

Anindilyakwa ranger Terence Lalara is sad to see their effect on marine life.

"The main one is the turtles getting caught up in the ghost nets and dying, getting washed up on the beach," he said.

CSIRO Oceans senior research scientist Denise Hardesty has carried out a study of 16 years of data which has found the number of nets arriving has quadrupled, particularly in the Gulf of Carpentaria and Torres Strait.

She said in some areas that has meant an increase from 60 nets annually to nearly 300 a year.

"What we found is we see an increase in ghost nets landing on Australia's shores in that northern part of Australia," she said.

General manager of operations at the Australian Fisheries Management Authority, Peter Venslovas, said the nets were trapping and killing all kinds of marine life, including both endangered animals and local fish.

"Those nets entangle turtles, dugongs, dolphins, and they also collect sharks and other pelagic species of fish such as grey and spanish mackrell, and any unchecked indiscriminate fishing will have some effect on the local fish stocks," he said.

"These gill nets can be anywhere between tens of metres long, up to sometimes up over 100 kilometres, and they can be several tonnes in weight."

Getting nets out of the water

When big nets are spotted by Australian Border Force planes it is a costly and difficult operation to retrieve them.

They are often too heavy for the government's patrol boats to pick up, so it contracts Indigenous ranger groups and commercial fishermen to go and haul them in.

Because the nets continue to drift after they are spotted, they are difficult to find again.

This has led government agencies to develop a new system of attaching GPS beacons to the nets.

"They can be tracked after the patrol boat leaves the area and we can guide a contract vessel into the right area and they don't have to search around for it," Mr Venslovas said.

The federal government has provided $14 million for the tracking project for three years.

But it is not stopping the nets coming.

Federal Environment Susan Ley said the government was having discussions about that.

"We do have partnerships with South-East Asia, including Indonesia, where this is discussed, but we can't wait to tackle this at the source, even though this is important," she said.

"We need to find ways to remove these ghost nets and this discarded fishing gear from the water, and the critical thing is not wasting time actually searching for these walls of death floating around in the Gulf of Carpentaria causing damage."